Scott Yardley is in Poland trying to arrange a UK visa for his wife and stepdaughters after they fled Ukraine. 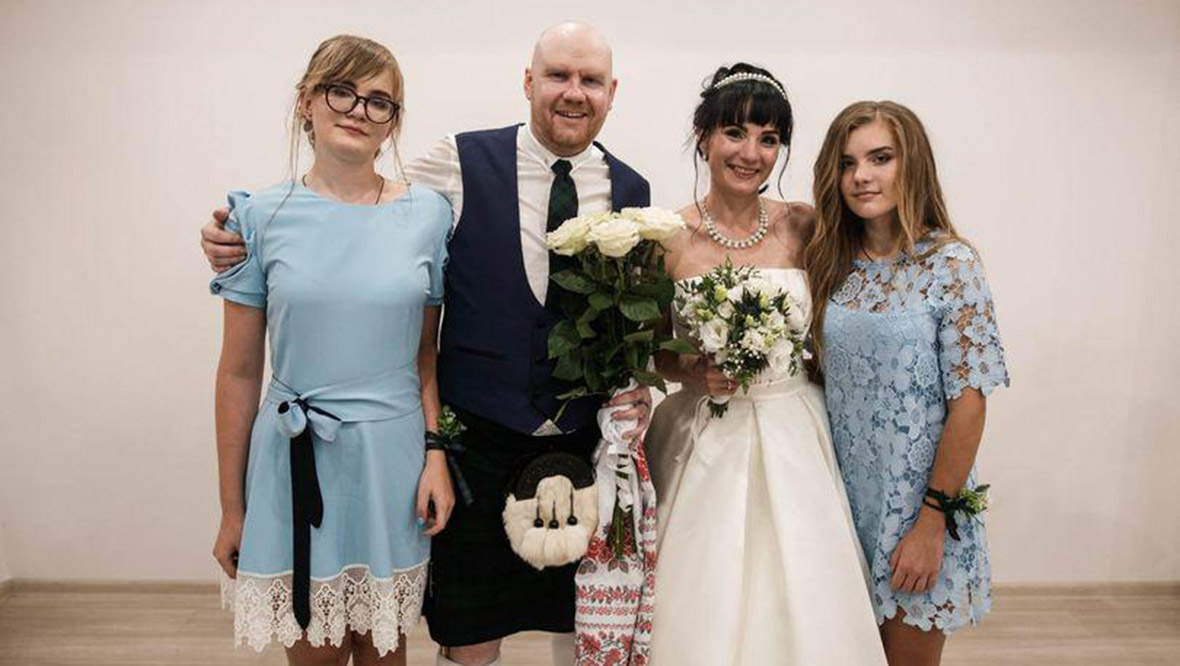 When Russia invaded Ukraine, Scott Yardley from North Lanarkshire knew he had to get his wife and stepdaughters out of the country.

Liza, Anya and Ira are now safely in Poland – but trying to get them visas so they can live with him in Scotland is proving extremely difficult.

Calls are continuing for the UK to relax its entry rules and allow more people into the country following Russia’s invasion of Ukraine.

Some of the busiest visa processing centres are in Poland, which has seen a huge influx of refugees.

Scott told STV News the situation was chaotic at the visa application centre in Rzeszów, west of Krakow, that his family went to on Thursday.

He said: “It’s effectively like a holding pen and there must have been upwards of 300-400 people in a canteen and there just didn’t seem to be any organisation.

“The staff spent 45 minutes just asking people to move back from the door and from there we were four hours waiting without any information – and those four hours they processed seven people and they were shutting the doors and telling people to leave.”

Liza was planning on moving to Scotland to live with Scott in Wishaw later this year.

After Vladimir Putin’s troops invaded, she fled to Lviv in the west of Ukraine with her daughters before crossing the border and being reunited with Scott.

“The staff on the railway had advised all the refugees to switch off their phones, so that they couldn’t be geolocated for shelling and bombing runs,” said Scott.

“There’s just no words, so I was numb until they got to Poland, it was just an absolutely terrible time.”

Although the family are happy to be reunited, the hotel bills are adding up and they’re still waiting to hear when they’ll get their visas.

Scott added: “This is coming up three weeks and a couple of days now – we were told it would be an expedited process, it would be done quickly, I think 48 hours was mentioned at the first port of call, so for 48 hours to become nearly a month you would think your own government would support you – they just have not done enough.”

As people continue to flee in their masses from Ukraine, the UK Government announced that refugees with passports and family members in Britain will be able to apply for visas online from Tuesday.

The decision comes after the government faced criticism over the speed of the UK’s response to the crisis.

Ministers have insisted that visa checks are required to make sure Russian President Vladimir Putin does not send Russian agents posing as refugees.

But the scale of the humanitarian crisis has led to demands for the UK to take in more Ukrainians, with up to four million people expected to flee the war zone.

So far around 2.2 million people have left in a crisis unseen in Europe since the Second World War.

The Home Office has come under pressure from opposition and Tory MPs – as well as the Ukrainian government – to simplify the system which allows family members of people settled in the UK to join their relatives.

For now, it’s a waiting game but Scott and his family hope they’ll be in Scotland starting their new life soon.