Just Stop Oil activists glued themselves to a wall after throwing tins of soup over the painting on Friday. 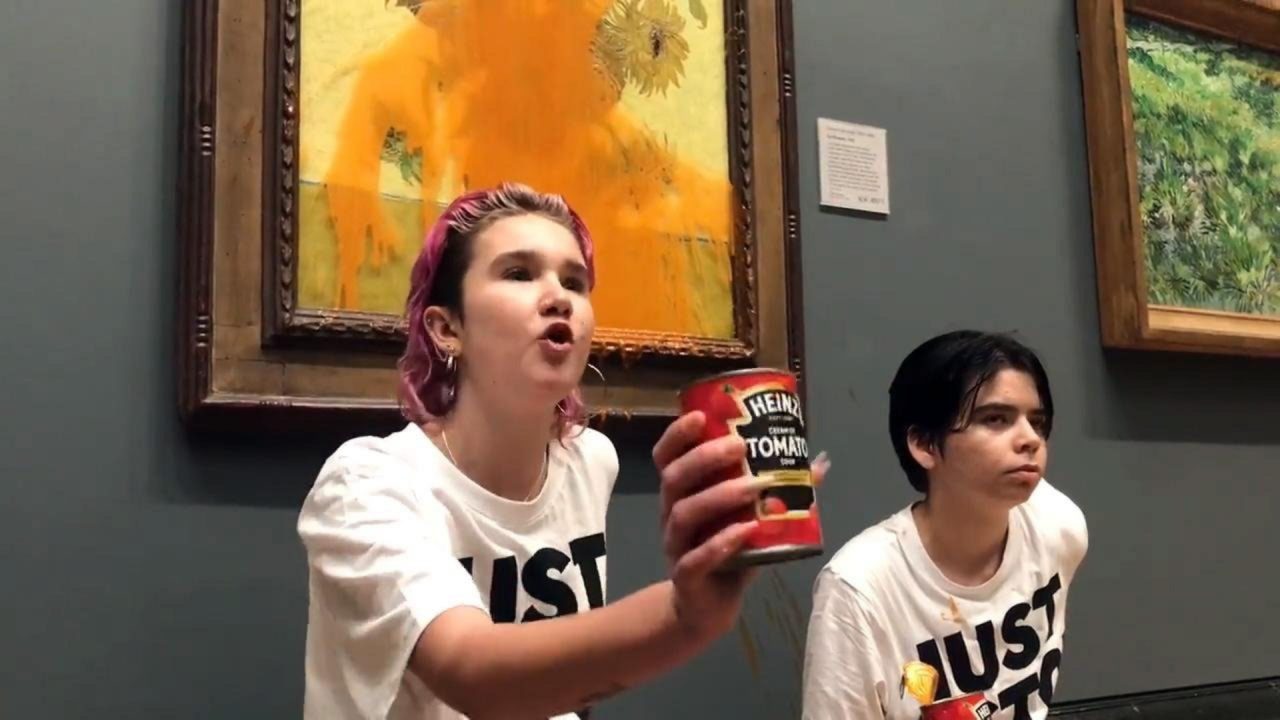 At around 11am on Friday morning, two women walked into the room which displays one of Van Gogh’s seven Sunflowers paintings at the Trafalgar Square gallery before throwing the contents of two tins of Heinz tomato soup over the famous artwork.

The two women, dressed in Just Stop Oil t-shirts, then glued their hands to the space beneath the painting.

One of the activists, 21-year-old Phoebe Plummer then said: “Is art worth more than life? More than food? More than justice?

“The cost of living crisis is driven by fossil fuels – everyday life has become unaffordable for millions of cold hungry families – they can’t even afford to heat a tin of soup.

“Meanwhile, crops are failing and people are dying in supercharged monsoons, massive wildfires and endless droughts caused by climate breakdown. We can’t afford new oil and gas, it’s going to take everything. We will look back and mourn all we have lost unless we act immediately.”

The other activist, 20-year-old Anna Holland said: “UK families will be forced to choose between heating or eating this winter, as fossil fuel companies reap record profits. But the cost of oil and gas isn’t limited to our bills.

“Millions are being forced to move and tens of thousands face starvation. This is the future we choose for ourselves if we push for new oil and gas.”

The climate activists are demanding that the UK Government halts all new oil and gas projects and the latest protest follows road blockages by the groups in London in recent days.

Just Stop Oil said the recent protests were “in response to the Government’s inaction on both the cost of living crisis and the climate crisis”.

Following the incident visitors were escorted out of room 43 in the gallery where the painting hangs by security, and the doors to the room were shut.

The Metropolitan Police confirmed that two protesters were arrested and the painting was unharmed.

A spokesperson said: “Two protesters who entered the National Gallery just after 11am and threw a substance over Van Gogh’s ‘Sunflowers’ painting before glueing themselves to a wall have been arrested for criminal damage and aggravated trespass.

“Specialist officers have now un-glued them and they have been taken into custody at a central London police station. There is some minor damage to the frame but the painting is unharmed.”

“The pair appeared to glue themselves to the wall adjacent to Van Gogh’s ‘Sunflowers’ (1888). They also threw a red substance – which appeared to be tomato soup – over the painting.

“The room was cleared of visitors and police were called. Officers are now on the scene.

“There is some minor damage to the frame but the painting is unharmed.

“Two people have been arrested.”

EasyJet insist public will not ditch holidays amid soaring costs