Queen's funeral marked across the country on historic day

The Queen's funeral was marked in a historic day of ceremony and mourning across the country. 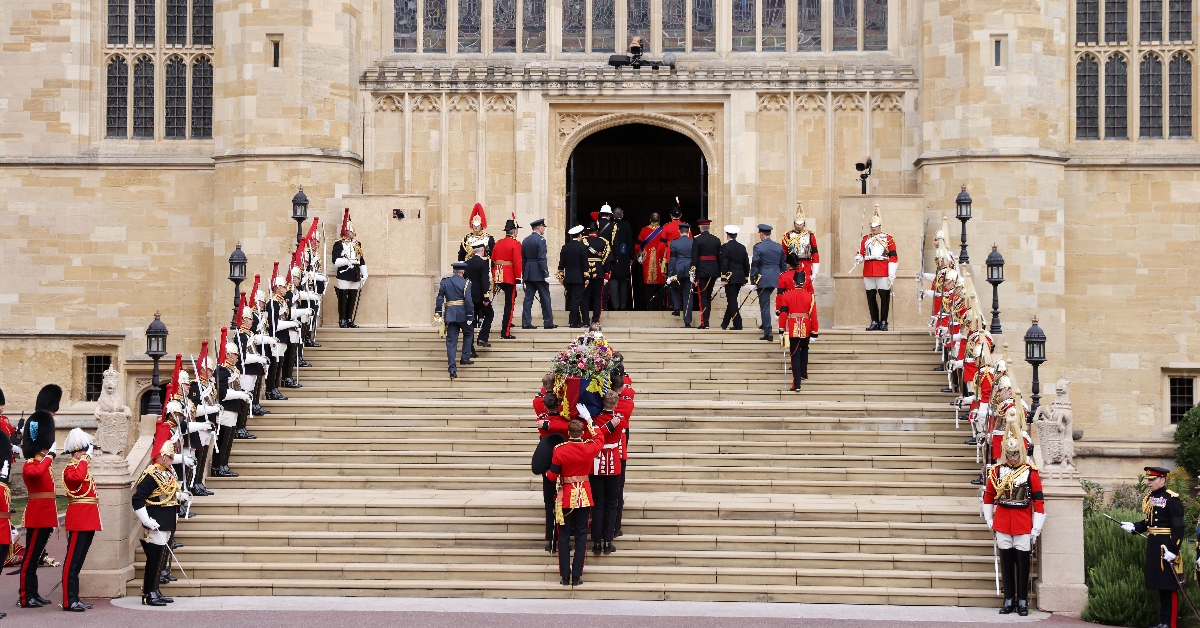 The funeral of Queen Elizabeth II was marked across the country as the Royal Family were joined by world leaders and foreign dignitaries to mark the life of the late monarch.

The Queen’s lying-in-state closed at 6.30am on Monday morning before her coffin was later taken on a grand military procession from the Palace of Westminster led by King Charles III.

The King was accompanied by Princess Anne, Prince Andrew, Prince Edward, Prince William and Prince Harry who followed behind the Queen’s coffin.

Before the service began at 11am the Westminster Abbey tenor bell was tolled for 96 minutes to reflect each year of the Queen’s life.

The funeral service, conducted by the Dean of Westminster, began at 11am at Westminster Abbey where the Queen was both married and coronated.

Around 2000 guests were in attendance including US president Joe Biden and his wife Jill.

First Minister Nicola Sturgeon was in attendance along with other Scottish politicians, including the Scottish Labour leader, Anas Sarwar, and his Liberal Democrat counterpart, Alex Cole-Hamilton.

A two-minute silence was observed across the UK before the congregation sang God Save Our King.

The Queen’s coffin was then carried from the Abbey and taken on a procession to Wellington Arch, accompanied by members of the armed forces.

They were joined by four representatives from the NHS, including May Parsons, who administered the first Covid-19 vaccine with members of the Royal Family following behind the coffin.

The procession passed a royal salute by the King’s Guard in the forecourt of Buckingham Palace before reaching Wellington Arch where the coffin was lifted by pallbearers from the State Gun Carriage and place it in the State Hearse.

The cortege then passed through the streets of London on the journey to Windsor as crowds could be heard cheering and applauding.

In the afternoon the coffin was taken on the Long Walk procession past crowds who had turned out in Windsor to pay respects.

The coffin arrived at St George’s Chapel at Windsor Castle where the Queen’s committal service began at 4pm, led by the Dean of Windsor.

The service was accompanied by music from Queen Elizabeth’s piano teacher, Sir William Henry Harris, who served as the organist of St George’s Chapel between 1933 and 1961, throughout the Queen’s childhood.

It included another personal touch as the choir sang The Russian Contakion of the Departed – which was also sung for the funeral of the Duke of Edinburgh.

After the crown and sceptre were taken from the coffin, it descended into the Royal Vault.

Meanwhile, the momentous funeral was marked across the country with live screenings held around the UK.

Mourners in Edinburgh gathered in Holyrood Park to watch the historic events unfold while care homes around the country showed the funeral ceremony for residents.

In Aberdeen, a piper was invited to play at Rubislaw Park Care Home to mark the occasion for residents before the funeral commenced.

Vue cinemas in Glasgow hosted sold-out screenings of the funeral while staff and students at the University of St Andrews came together with local residents to watch the funeral at Younger Hall, which was opened by the Queen Mother in 1929.

People from Scotland also travelled to London for the occasion as thousands turned out to line the streets for the procession.

Speaking before the day’s events unfolded, Metropolitan Police deputy assistant commissioner Stuart Cundy said “nothing can compare” to the “hugely complex” task, describing it as the “largest policing operation” in the Met’s history.

First Minister Nicola Sturgeon said it was an “honour to represent Scotland” as leaders from across the globe joined with the royal family and other mourners at the Queen’s state funeral.

The clean-up operation has now begun after hundreds of thousands of people flocked to London for the event.