Baby Sofia was born prematurely at 22 weeks and four days and spent four months in hospital. 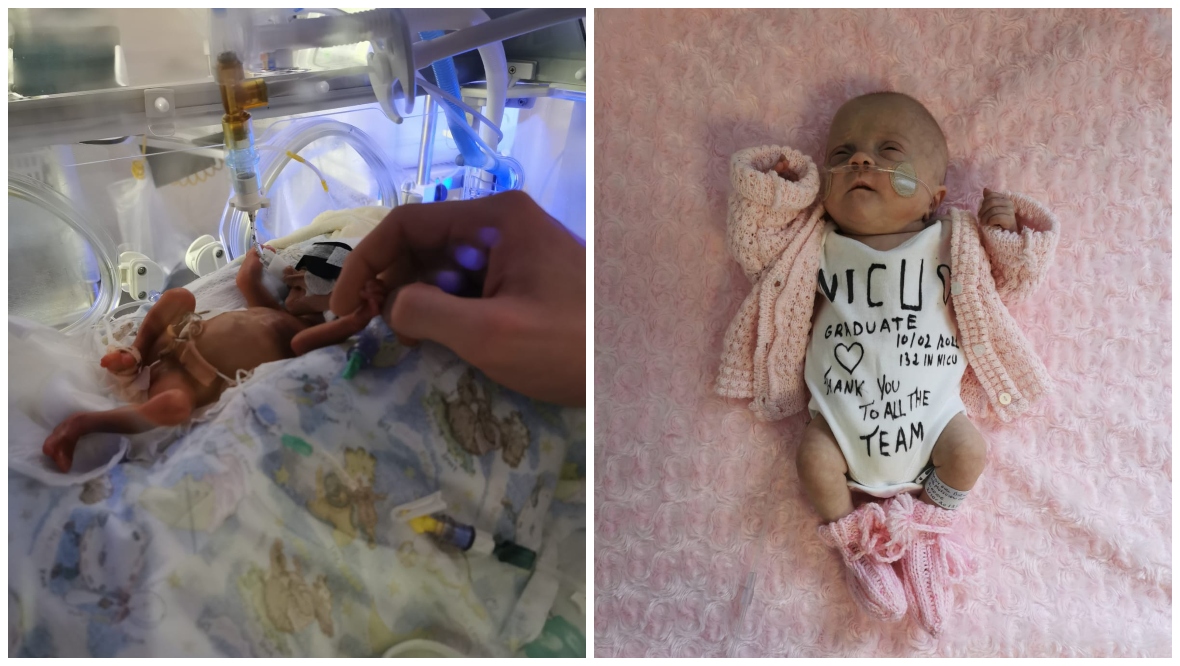 One of the youngest babies to survive being born prematurely in Scotland has finally gone home after more than four months in hospital.

Baby Sofia was born prematurely at 22 weeks and four days at University Wishaw Hospital, and doctors gave her just a ten per cent chance of survival during labour.

Yet the youngster has defied the odds and has now gone home with parents Egija and Inars.

Due on February 1 but born on October 2, at 500g Sofia weighed as little as a loaf of bread and at 26cm, was no bigger than a human hand.

Mum Egija, from Airdrie, said: “Everything was fine at the 20-week scan. Then just over a week later, I felt pain so I went into hospital and was told that I was already dilated and had to go into labour.

“After ten days bed rest, our beloved daughter Sofia made an appearance. She arrived in the world with the biggest scream and was crying so much. We didn’t expect she would survive but that’s where our journey started.”

Sofia spent her first three months in an incubator with mum and dad spending hours each day by her side.

Egija said: “Sofia was literally the size of a hand, so fragile and small and her skin was see-through. I had to wait a week to hold her for the first time because she was so fragile. Once I was able to hold her, they couldn’t get her out of my hands.”

Sofia suffered from a number of health issues while in hospital, from a heart defect to stage one brain bleeds, to an eye disease, retinopathy of prematurity and numerous infections.

She had seven blood transfusions and respiratory distress symptoms as her lungs weren’t fully developed.

This led to her being ventilated to help her breathe and despite being at home, still has a tube attached to give her extra oxygen.

Egija continued: “I was at the hospital all the time. Some days as long as 16 hours, and my husband would come after work. I just didn’t want to leave her, especially on the many really tough days when we didn’t think Sofia would make it.

“We want to thank all the staff from maternity ward, newborn intensive care unit and special care baby unit at Wishaw and Glasgow Children’s Hospital. They have saved me and my little miracle. They have done so much for us and they will always be our family and forever in our hearts. We will miss them so much.

“Some of the staff were surprised I was coming in every day with a smile on my face but I wanted to be strong for Sofia. I didn’t want her to see me cry and I never cried in front of her until she was strong enough to go into a cot. Then I had a good, happy cry.

“She was hooked up to lots of machines and she was ventilated for several weeks to help her breathe. First time they tried to get her to breathe on her own, she only lasted twenty minutes then her heart rate dropped and I felt like I was losing her but the medical and nursing staff were great. I nearly fainted I was so scared.

“They kept trying every couple of weeks and on the sixth try she managed to stay off the ventilator. Then she didn’t react well after getting her immunisations and vaccines in the cot and was forgetting how to breathe so had to go back into the incubator a few weeks ago.”

It was only during the last few weeks Sofia was strong enough to go in a cot as her weight and strength improved. Then it was finally time to go home.

Egija said: “Sofia has been doing great since we got home. She has the biggest and most beautiful smile on her face and is getting used to her new surroundings. We are all loving it, including my two dogs who are very curious at this new arrival.

“She’s now four months old and I look at her and think she could still be in my tummy because of how small she is, even though she is now four times her birth weight.

“We have loads of follow up checks at the hospital for the first two years and she has to get check-ups at the lung clinic for three or four years but everything is moving in the right direction.

“To all other mummies going into such an early labour, there is hope. Never give up. I want to share this story as I can give hope to other mums who are expecting so early.”

Cheryl Clark, NHS Lanarkshire chief midwife, said: “Baby Sofia is such an inspiration and we are so happy she is now home with her family.

“On behalf of all the staff who have been involved in her care, I would like to wish Sofia and her parents all the best for their future together.”