The sister of murdered Tony Blair is calling for a law change after coming face-to-face with her brother's killer at a funeral. 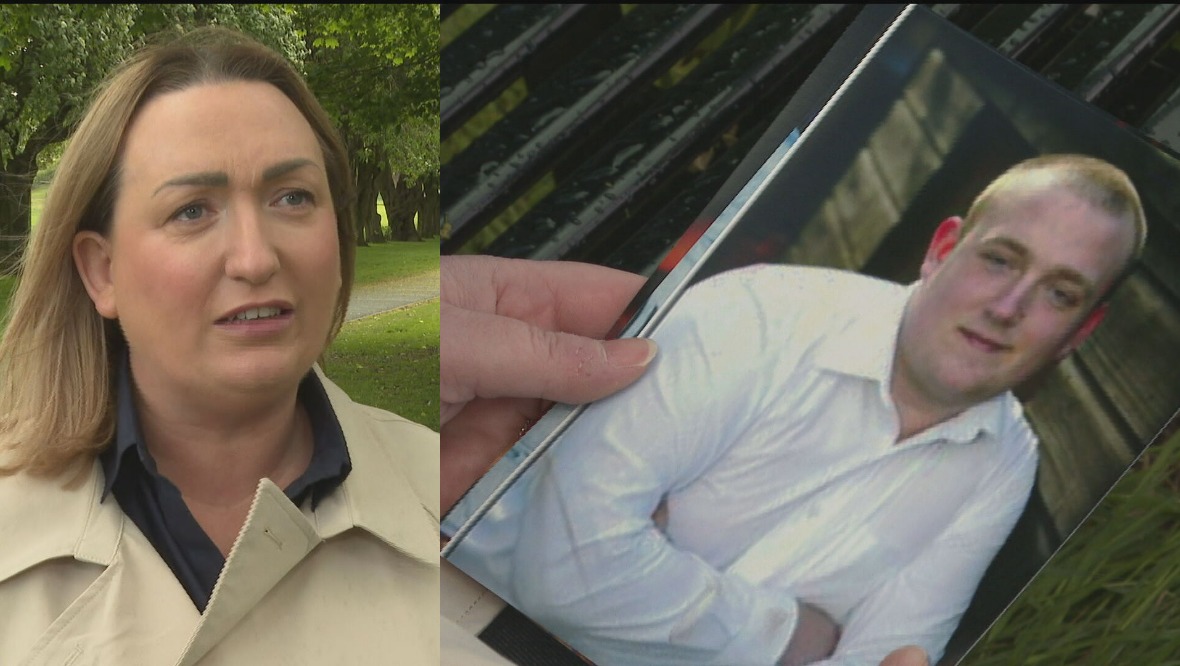 The sister of a murdered man is calling for a law change after coming face-to-face with her brother’s killer at a funeral without being notified he was back in the community.

The then 47-year-old set the Airdrie home of his ex-girlfriend Veronica Miller ablaze while she and Mr Blair slept inside.

Ms Miller, then 26-years-old, managed to escape from the property by jumping out of a window, but Mr Blair died inside.

“It was absolutely shattering, that he was getting out and we weren’t even told”

“From that day our lives were shattered. It was hell on earth,” Ms Jones said, speaking exclusively to STV News.

McAvoy was sentenced to 15 years in prison, but in 2019, Ms Jones heard through a friend that he was back in the community.

“He was given licence to go out and work on placement in a hotel, and we found out before the prison service told us,” she said.

“It was absolutely shattering, that he was getting out and we weren’t even told.”

As well as Mr Blair’s killer being back in the community, Ms Jones also had to face him at a funeral.

“He was at his mother’s funeral, I saw him there with no security, no prison guards, on his own.

“Not told and let down. It brought everything back again.”

She added: “Victims are not given any say in cases like mine.

“It’s as if Tony doesn’t exist anymore, like his death didn’t affect us.

“It’s shattered my family. I have the life sentence.”

Ms Jones feels she and other families are being locked out of the justice system and kept in the dark about perpetrators movements.

“There needs to be more transparency with the justice system and stop making excuses.

“I don’t want anyone else to suffer like we all have.”

Ms Jones said she is most concerned about her family coming into contact with McAvoy and is calling for reform of the Victims Notification Scheme to ensure that victims do not have to come into contact with perpetrators.

“It scares me, I don’t want my little girl [to run into McAvoy],” she said.

“My brother’s partner is devastated and scared witless.

“None of us want him on our doorstep. It would be a slap in the face to us, and Tony’s memory.”

“Leslie’s story is heart-breaking and her efforts to improve the justice process for other victims and their families are extremely admirable,” Greene said.

“It’s clear she has been let down by the process, not being informed of important changes to the case, or having enough of a say, if any, at key stages.

“I want to ensure victims have a say in parole hearings, communication with the justice system and they’re afforded every right they deserve.”

“However, measures are already being taken forward in areas covered by the proposals.

“A public consultation on the Not Proven verdict and related reforms closed on March 11 and we are now carefully considering the range of views received.

“This government has strengthened the rights of victims and certain relatives to be informed about an offender’s status, but we are considering what further improvements could be made to the Victim Notification Scheme.

“An independent review of the scheme is underway to ensure it is fit for purpose and serving victims effectively.”