The Duke and Duchess of Cambridge took a trip to St John's Primary on Wednesday during their two-day visit to Scotland. 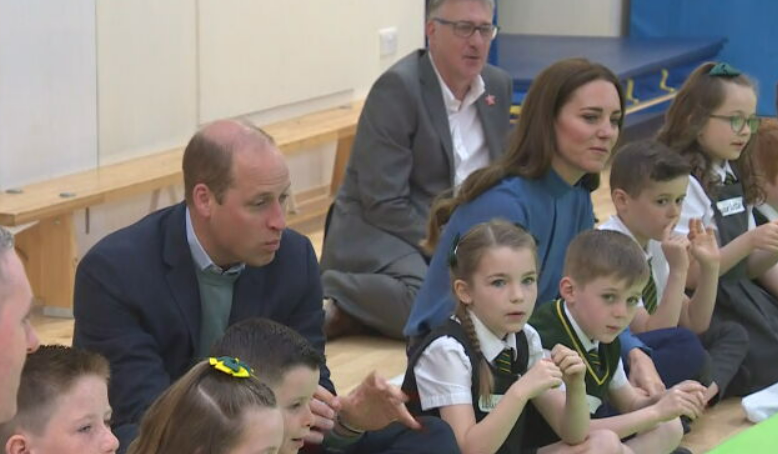 Excited primary pupils in Inverclyde have been welcoming two royal visitors to their school.

The Duke and Duchess of Cambridge took a trip to St John’s Primary in Port Glasgow on Wednesday during their two-day visit to Scotland.

Taking part in a Roots of Empathy session, which promotes the healthy development of empathy in young children, the couple took time to speak with pupils and join in with lessons.

William joked about his wife becoming broody as she cuddled a baby and sang along with the children.

As they spoke with pupils at the school on the banks of the Clyde, he said: “Can you get my wife out of here before she gets broody?”

By the end Kate was holding ten-month-old Saul who was brought to the school by his mother Laura Molloy as part of the sessions run by Action for Children, a charity the Duchess supports as patron.

Action For Children, which runs the programme in 18 local authority areas in Scotland, says the sessions, where the pupils are guided in discussions about their own emotions, improves the behaviour of pupils, who are kinder with less instances of bullying.

The Cambridges sat cross-legged on the floor and joined a session as Saul crawled on a mat and sang nursery rhymes with the children, and even did the hand actions to Incy Wincy Spider.

Kate asked the group of around 35 seven-year-olds “Do you think lots of schools should have a project like this?” and when some replied “yes”, she added “We do too”.

The duchess later chatted to the mother and her baby, and she briefly held Saul, who will celebrate his first birthday in June, but he quickly stretched out his hands for his mother.

William and Kate, known as the Earl and Countess of Strathearn in Scotland, came north on Wednesday to also visit a project operated by The Wheatley Group, a new-build property in the Kennishead area and Glasgow University.

Their tour of Scotland is expected to focus on raising awareness for mental health with homelessness also high on the agenda.

The engagements will form part of a UK-wide tour for the couple to mark the Queen’s Platinum Jubilee this year.