Who is Balmore Man? New bid to solve mystery of body found in woods

Cold case investigators aim to identify man found in woodland near Glasgow in 2011. 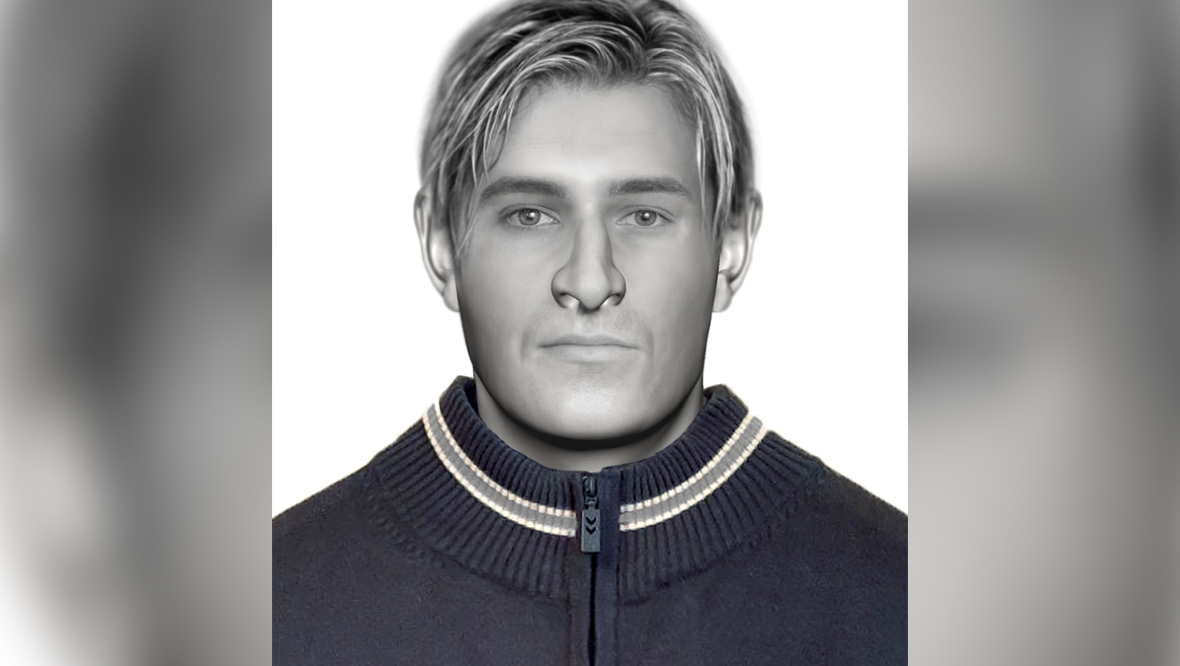 A new facial reconstruction image has been released of a man whose body was found in woods near Glasgow more than 11 years ago.

Cold case investigators hope the image will help identify ‘Balmore Man’, who was found hanging from a tree within a densely wooded area of Golf Club Road in Balmore, East Dunbartonshire, on October 16, 2011.

It is believed the man could have been dead for up to six months before he was discovered. He is also thought to have suffered a traumatic event several months before his death.

Mystery surrounds the discovery of the human remains, which were found after a wildlife photographer noticed something amiss in the background of one of their pictures.

Police said there were no suspicious circumstances surrounding the death, but have been unable to establish the man’s identity despite previous appeals and extensive inquiries.

In a fresh bid to solve the case, investigators at the Scottish Cold Case Unit at Glasgow Caledonian University, in partnership with missing persons’ charity Locate International, have now released a new facial reconstruction and 3D images of the man’s clothing.

The images, produced by the University of Dundee, are being showcased alongside photos of the man’s belongings and drone footage of the woodland where his body was found.

Forensic analysis has revealed the man suffered injuries before his death, which may have affected his appearance, quality of life and gait.

It’s estimated he was aged between 25 and 34, 5ft 8in to 6ft 1in tall, of slight build, white European, with light-coloured hair.

Dr Maureen Taylor, co-director of the Scottish Cold Case Unit at Glasgow Caledonian University, said: “The team have been undertaking inquiries around the clothing he was wearing and his belongings, a geographical profile of the location in which he was found, and missing men from the UK and Europe.

“We know he had a chip to one of his front teeth and injuries to his nose and jaw that he sustained in the months leading to his death.

“These injuries were not only left untreated but would have caused him significant pain. We also believe that he may have walked with a limp or had difficulty walking.”

A number of personal items including toiletries, additional clothes, headphones, chargers, a lighter, and cigarette papers were found in a Nike messenger type bag near his body.

It’s thought he could have been dead for up to six months before he was discovered.

Professor Lesley McMillan, co-director of the unit, which is made up of criminology students and academic staff, said: “We hope the information and images in our appeal jog someone’s memory.

“Perhaps someone will recognise his clothing or his belongings and help us establish who he is. The Cold Case Unit has spent the last 18 months gathering as much detail as we can to progress this case.

“We greatly value the relationship we have with Police Scotland and are grateful to our colleagues at the University of Dundee for the renewed facial reconstruction and support with 3D imaging.

“We would encourage anyone with information that might be relevant, no matter how small, to please get in touch with us.”

Police Scotland said the force was “extremely grateful” for the unit’s “diligent work”.

Detective inspector Kenny McDonald, of Greater Glasgow Division, said: “This is a long-term inquiry examining the circumstances of unidentified human remains, and a detailed forensic review of all physical matter has been conducted.

“With the support of Glasgow Caledonian, I hope this new image will offer fresh leads which could help to finally identify the man and bring closure to any members of his family.”

What is the Scottish Cold Case Unit?

The unit consists of a group of criminology students from Glasgow Caledonian University, working alongside Locate International to review and investigate cold cases involving missing and unidentified people.

The unit has been operating for around 18 months and “Balmore Man” is one of its first cases.

Dr Taylor said: “This is a really, really interesting case and we’ve been working on it for 18 months.

“We feel really quite invested in it now and we are really keen to get these new images out there and this information out to the public, so that we can help find this man’s name and hopefully repatriate him with any family he may have.

“The students have put in a lot of effort and time – all on a voluntary basis, it isn’t part of their course.

“We have seen them developing as investigators and seeing their confidence grow – they have also become really invested in this case and really passionate about it.”

Professor Sue Black described the post-mortem in detail in her book, All That Remains, describing how his kneecaps showed some evidence of articular degeneration.

The book also describes how “Balmore Man’s” upper left central tooth was fractured, possibly in the same incident that caused the injuries to the rest of his face – meaning the chip would have been visible every time he opened his mouth.

Dr Tobias Houlton, course co-ordinator for forensic art and facial anthropology, said: “By revisiting this case, looking at the original scan files, I managed to go through the whole process of reconstructing the face again, using the up-to-date standards.

“Thankfully, because it is an old case, I wasn’t making a point of looking at the old reconstruction.

“I was making sure to do it blind, so not be influenced, and then generated the new refurbished face – and again went through the process of texturing with the information we had.

“Unlike many facial reconstructions, there was preservation of scalp hair, so that’s why in the generated final image of ‘Balmore Man’ there is the suggestion of the hairstyle he was found with.

“There’s also evidence of the clothing he was found with, which we were able to superimpose onto the reconstruction, so that you have a general idea of the attire he had in his final moments.”

Anyone with information can email ColdCaseUnit@gcu.ac.uk or phone on 0141 331 3235. Full details of the case, and a form that can be completed anonymously, is available online at https://locate.international/balmore-man-appeal-2023/. Alternatively, contact Police Scotland on 101.