The clock ticked down to the official finish time with the end not yet in sight. 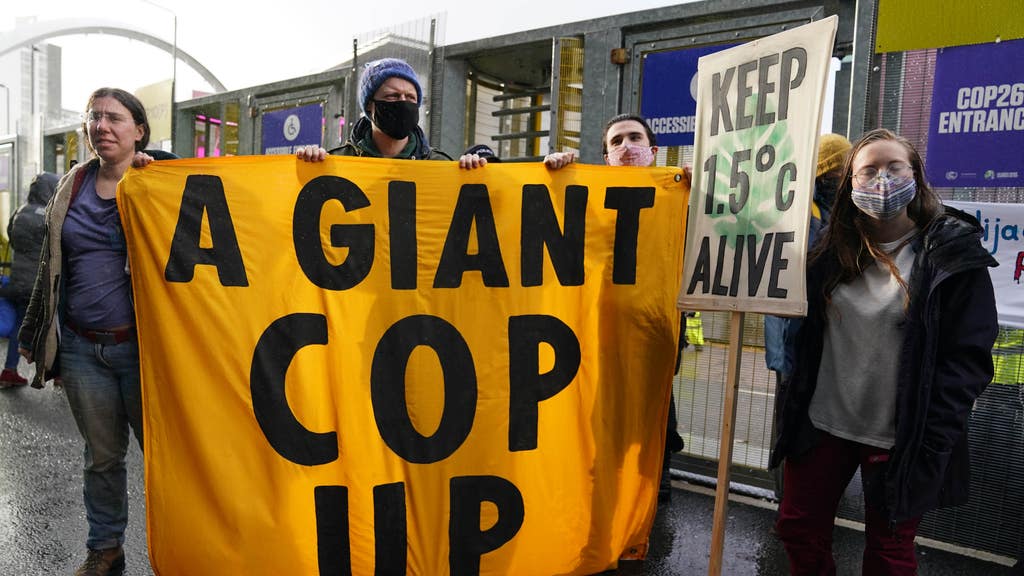 After a fortnight that has seen world leaders jet in, Boris Johnson make a brief train trip to urge ambition and protests, marches and debate, COP26 is entering the endgame.

Here’s what happened on the last official day of the UN climate talks.

The new draft of the “cover decision”, the main deal that could come out of Glasgow was published this morning.

Immediately obvious was some weaker language on accelerating a phase-out of coal and subsidies for fossil fuels – but they were still in there.

Whether the references survive into the final text remains to be seen, but plenty of countries in the afternoon’s plenary supported action on fossil fuels being in the decision.

The curse of the single word reared its head again. Back in Paris in 2015, the whole deal nearly fell over on a dispute over “shall” or “should”.

In Glasgow, the debate was less dramatic – over whether a change in the new draft from “urging” countries to come back with stronger action plans by next year to “requesting” was a strengthening of the text or a weakening.

The answer? Request is a directive whereas urging is just a strong form of encouraging. A UN Climate Change document on “Choosing verbs” puts requests above urges in terms of strength, and the Paris Agreement used “request”. So that is that settled.

– Walking out and climbing in

As the clock ticks down on the climate talks, protests continue, with hundreds of activists marching out of a gathering in one of the main halls, singing and chanting and led by indigenous people, to join a protest outside COP26.

They carried red ribbons to represent the red lines they say negotiators are crossing.

Two people tried to get into the venue by scaling the high fence that surrounds the conference centre, but were led away by police.

– World leaders and a world on fire

The “big heads” of world leaders have made another appearance at the COP, this time gathered round a 10-foot globe over a bonfire, with a smoke machine for added atmosphere.

They were dressed as firefighters – but Oxfam, which was behind the stunt, warned the “firefighting ineffective real world leaders” that this is not a drill.

Meanwhile, at the Peatland Pavilion, attendees were invited to work out their “bog age” – spanning from the Neolithic to the present day.

As those who have spent two weeks at COP26 – with the end not yet in sight – might feel some affinity with bog creatures this may prove a handy chart for many.

Despite COP26 President Alok Sharma’s best efforts, the timetable for a Friday 6pm finish slipped, perhaps predictably, with the conference going into the evening at the very least.

It’s got a long way to go to beat the longest overrunning conference – COP25 – which went into Sunday lunchtime, but all bets are off as to when this summit finishes.