From Lviv to Lanark: Ukrainian family settle into new life

Nataliya and her husband Liubomyr drove 1,600 miles with their three children. 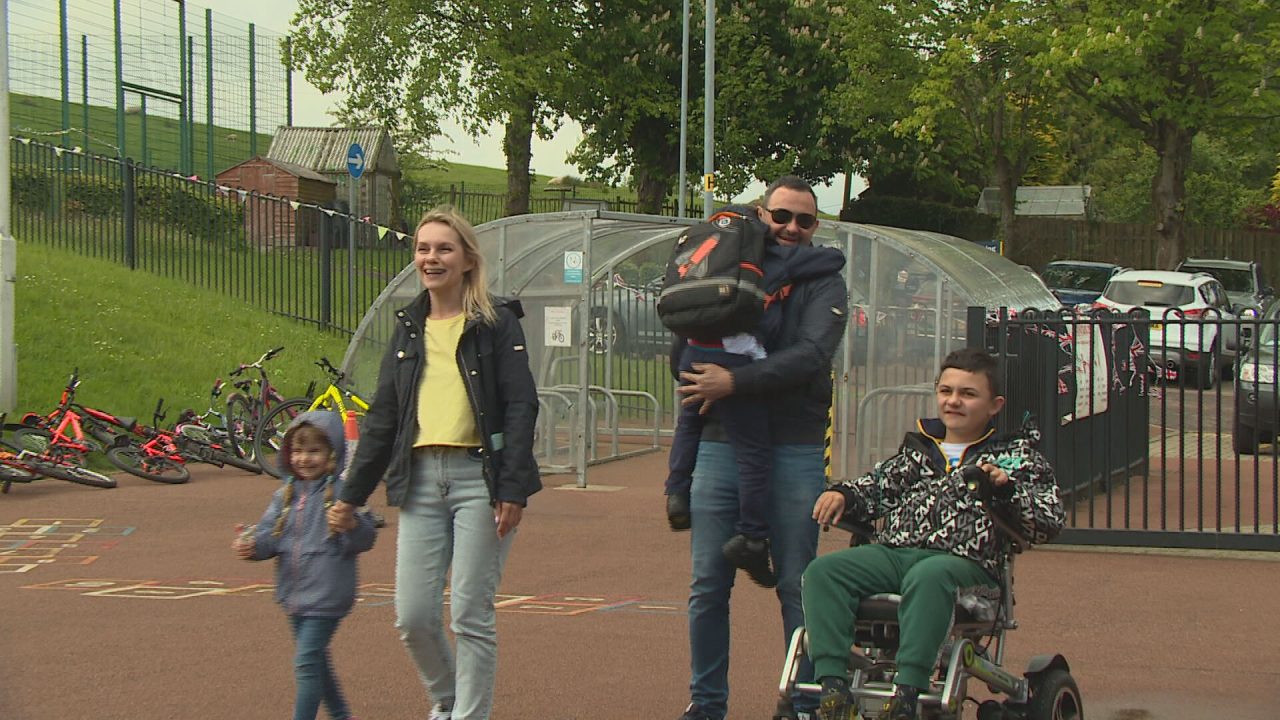 A young Ukrainian family have opened up about their new lives in Scotland after fleeing war.

Nataliya Hevak made a plea for help to bring her husband and three children to safety after Lviv was targeted by Russian missiles.

Their call was answered by a big-hearted family in South Lanarkshire.

They now live in a farmhouse in Hawskland, a village near Lesmahagow, with a sprawling back garden, friendly neighbours and ponies in the surrounding fields.

Nataliya said: “The kids love it here – they play with all the other children in the area and get to ride the ponies. They love playing with the dog too.

“Marta and Eilidh don’t speak the same language but they get on well, playing dress-up as princesses. They all still understand each other and pick up bits of English. They are learning fast.”

She added: “The community have been so welcoming. Our neighbours brought us presents and sweets. We had a big party and a barbecue for Liubomyr’s birthday. There are so many nice people here.

“Gillian and Paul have been amazing. Gillian does so much for us, helping us with papers and getting to hospital appointments and the job centre.”

The children have taken all the changes in their stride and are adjusting well to their new lives in Scotland.

Roman is settling in at Milton Primary School and Marta is looking forward to joining nursery next week.

Levko has Duchenne Muscular Dystrophy and has been in a wheelchair for the last two years. He is expected to attend a school for additional needs after the summer.

Nataliya said Levko’s quality of life has improved as Scotland is more accessible for disabled people than Ukraine.

“I asked Levko if he would ever want to go back home and he said ‘Yes… after a hundred years’, he is so happy here,” she said.

“Usually we would have had to leave him with his grandparents a lot. Here, we don’t have to worry about where to take him or think about toilets; they are everywhere. We take him shopping with us and to the park.

“We don’t get this in Ukraine. You don’t see many people out in wheelchairs there.

“We want him to meet others like him so he doesn’t feel alone.”

After Russia invaded Ukraine in February, their city near the Polish border found itself at the centre of Europe’s worst refugee crisis since the Second World War.

Tens of thousands of people pass through Lviv on their journey out of their country, sleeping in sports halls and schools.

Nataliya and her family were involved in efforts to take medicine, food and supplies to refugees at the train station and the crossing points with Poland.

Despite Lviv’s status as a haven from the conflict, its strategic importance at the western border makes it a target for Russian forces.

“When the war started it was pretty quiet and we decided to stay home,” Nataliya said. “When we had all these attacks near our area we had to make a decision to take the kids away. It was becoming very dangerous and the kids got scared.

“It could be a school, a hospital or a home. The Russians don’t care.”

In March, 35 people were killed and more than 130 were injured during a missile strike on a military base 15 miles from Lviv – described as a “significant escalation” due to its proximity with Poland, a NATO member.

Seven were killed and several left wounded in April during Russian airstrikes, according to the regional governor.

Several missiles have also been launched in Lviv this month, destroying some military infrastructure and three power plants, causing a blackout.

While the family are enjoying their time here, Nataliya wishes for peace in Ukraine so they can return to their old lives.

“I hope so much that the war finishes and we will win by the end of the summer, so Roman will be able to go to his school in September,” she said. “But it doesn’t look like it will end so soon.

“We had a really nice life. Our country was so great to live in. Our town is really beautiful and our family lived close. I hope our home will be like how it used to be before the war.”