Scenes of celebration became 'ugly' after officers tried to disperse the crowds. 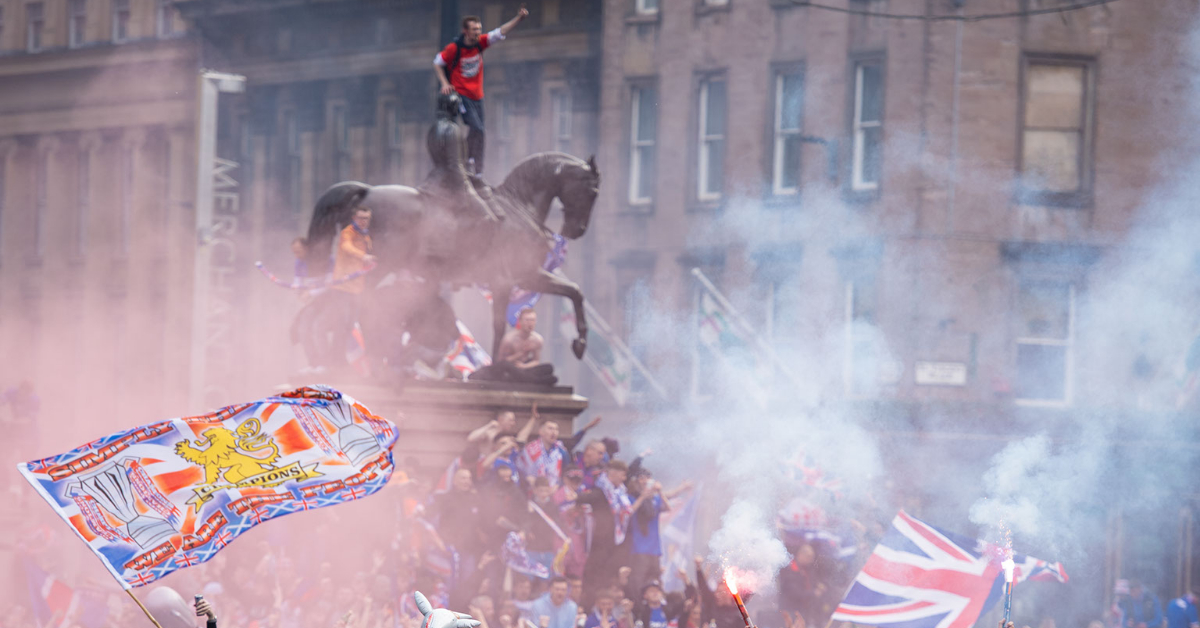 Five police officers have been injured and almost 30 people arrested after massive crowds of Rangers fans had to be dispersed from George Square in Glasgow.

The thousands of football supporters were celebrating their team’s Scottish Premiership triumph with many gathering outside Ibrox and then marching through the city on Saturday before scenes turned “ugly”.

The First Minister said she was “utterly disgusted” and hopes that Rangers FC will reflect on what must be done to counteract behaviour of fans as there is concern that Glasgow will have to remain in Level 3 for even longer amid increasing cases of coronavirus.

There was a large police presence throughout the day, with increasing numbers deployed to George Square as the singing, dancing, and lighting of pyrotechnics continued for hours.

But police said some fans became “increasingly disorderly” with property damaged and people being assaulted in “ugly scenes”. Officers were targeted by the crowd, with missiles and flares thrown at them.

Glasgow’s police chief condemned the “disgraceful behaviour” and thanked the officers who put themselves in harm’s way to bring the “violent and disorderly gathering to an end”.

Although most of the crowd dispersed, a number remained and confronted the police with “violence and aggression” with officers coming under direct attack.

Nicola Sturgeon said that she had been inundated with messages about the “disgraceful scenes” in Glasgow.

She said: “Police still have a job to do, which restrains my comments to some extent – but to say I’m utterly disgusted by the Rangers fans who rampaged through the city would be an understatement.

“I’m also angry on behalf of every law abiding citizen. In normal times, the violence and vandalism, and the vile anti-Catholic prejudice that was on display, would have been utterly unacceptable. But mid-pandemic, in a city with cases on the rise, it was also selfish beyond belief.

“People across the country still living under the most difficult restrictions – not able to see family or attend weddings and funerals – are rightly furious at the irresponsible actions of a thuggish minority who seem to care little for the risks they pose to other people.”

She said that there is a need for the government and police to reflect on what more can be done to prevent and tackle such scenes but said that Police Scotland officers had her admiration for the job they did in “difficult and dangerous circumstances”.

Scaffolding around the Walter Scott Monument in the centre of the square had been scaled during the celebrations.

A major clean-up operation took place overnight with the area intended to host an organised demonstration on Sunday.

Justice secretary Humza Yousaf said: “My full support to police officers who put in an incredible shift [yesterday] in very difficult circumstances. Absolutely disgraceful that they were subjected to the kind of thuggery we saw last night. Incidents of violence, disorder, anti-Catholic and any other hatred will be followed up.”

Fans had been urged to celebrate in accordance with coronavirus restrictions and avoid gathering in numbers. Glasgow is currently the nation’s coronavirus hotspot, with the highest prevalence of the virus per head of population. The city will remain in Level 3 lockdown, along with Moray, while the rest of the country enjoys the easing of restrictions.

Figures published on Friday showed Glasgow recorded 80.4 cases per 100,000 people in the seven days to May 11.

Chief superintendent Mark Sutherland, Police Scotland’s divisional commander for Greater Glasgow, said: “As celebrations continued sections of the crowd became increasingly disorderly, property was damaged and people were assaulted. Our officers became the focus of the crowd’s attention with missiles and flares being thrown at them. Our policing response has been proportionate. We have responded appropriately and consistently to the behaviour of those gathered.

“I strongly condemn the behaviour of these supporters who have not only placed our officers at risk but have sought to damage the image and reputation of this great city, especially during this critical period of the pandemic.

“I would like to place on record my thanks to the police and partners who manged this incident, especially those officers who put themselves in danger to bring this violent and disorderly gathering to an end.

“So far we know that three officers have been injured and more than 20 people have been arrested.

“We will be continuing our enquiries and my message is clear that if you have been involved in these ugly scenes then we you will be identified and arrested.”