Investigation under way into circumstances of Shea Ryan's death in Glasgow. 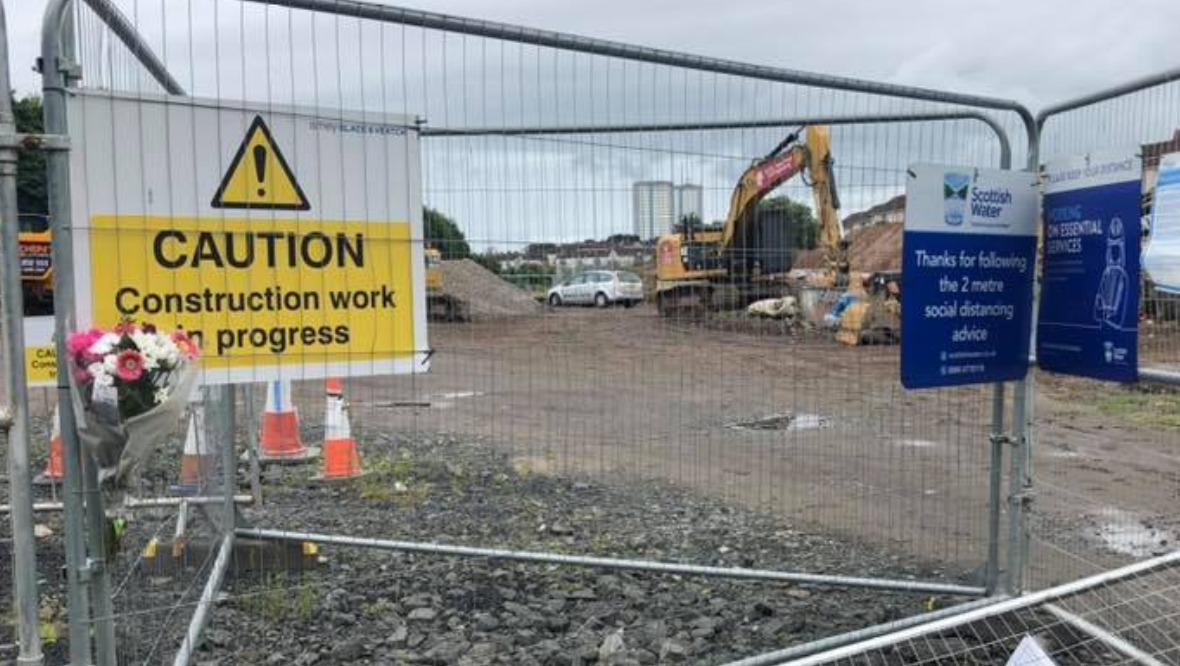 A ten-year-old boy has died after an incident at a building site in Glasgow.

Emergency services were called after the boy – named by his school as Shea Ryan – got into trouble in water at the site in Drumchapel on Thursday night.

He was taken to hospital by ambulance, but could not be saved.

An investigation into the circumstances is under way, however the death is not being treated as suspicious.

Flowers and cards were left at the gates to the site, while tributes were led by Shea’s school, Camstradden Primary.

Headteacher Margaret Coyle said: “We are devastated to hear the tragic news and our thoughts and prayers are with Shea’s family and friends.

“In the short period of time he’s been with us at the school Shea has made many friends with school staff and the children.

“Everyone will be shocked to learn of his death and we will do all that we can to offer support to the family and wider community in Drumchapel.”

Police remained at the site on Friday, and officers could be seen near a children’s play slide.

Scottish Water were carrying out flood prevention works on the land and said it was co-operating with the inquiry.

A police spokesman said: “Around 9.55pm on Thursday police were called to a report of a boy seriously injured at a works site near Glenkirk Drive, Drumchapel, Glasgow.

“Emergency services attended and the ten-year-old boy was taken by ambulance to the Queen Elizabeth University Hospital, where he died a short time later.

“Police enquiries are continuing to establish the exact circumstances surrounding this incident, however the death is not being treated as suspicious.

“Health and Safety Executive have been informed.”

A spokesperson said: “We were alerted at 9.54pm on Thursday, July 16 to reports of a person in the water in Drumchapel.

Local residents posted emotional tributes to the youngster on social media, while an online fundraising page was set up.

One local resident wrote on Facebook: “Drumchapel has lost one of its own at the peak of his future, not only touching the hearts of our home of Drumchapel but afar.

“Not many will sleep much tonight thinking all the questions that will need answers and how the poor family and friends are coping with this devastating blow they are having to deal with.

“Sleep tight young man, Drumchapel will always hold you in our hearts.”

Another said: “Fly high little one and may you rest in peace .. thinking of your family and friends at this hard time.”

Scottish Water said it was liaising with police and safety investigators.

A spokesperson for Scottish Water said: “We are aware of an incident in Drumchapel last night which has tragically resulted in a young boy losing his life.

“We, together with the other agencies working on this site, are assisting Police Scotland and the Health and Safety Executive with their investigations.

“All of our thoughts are with the boy who has lost his life, his family and friends.”

A Health and Safety Executive spokesman said: “HSE are aware and assisting police with their inquiries.”