Cancer sufferer Abbe Ferguson, 13, is now in remission thanks to the unknown donor. 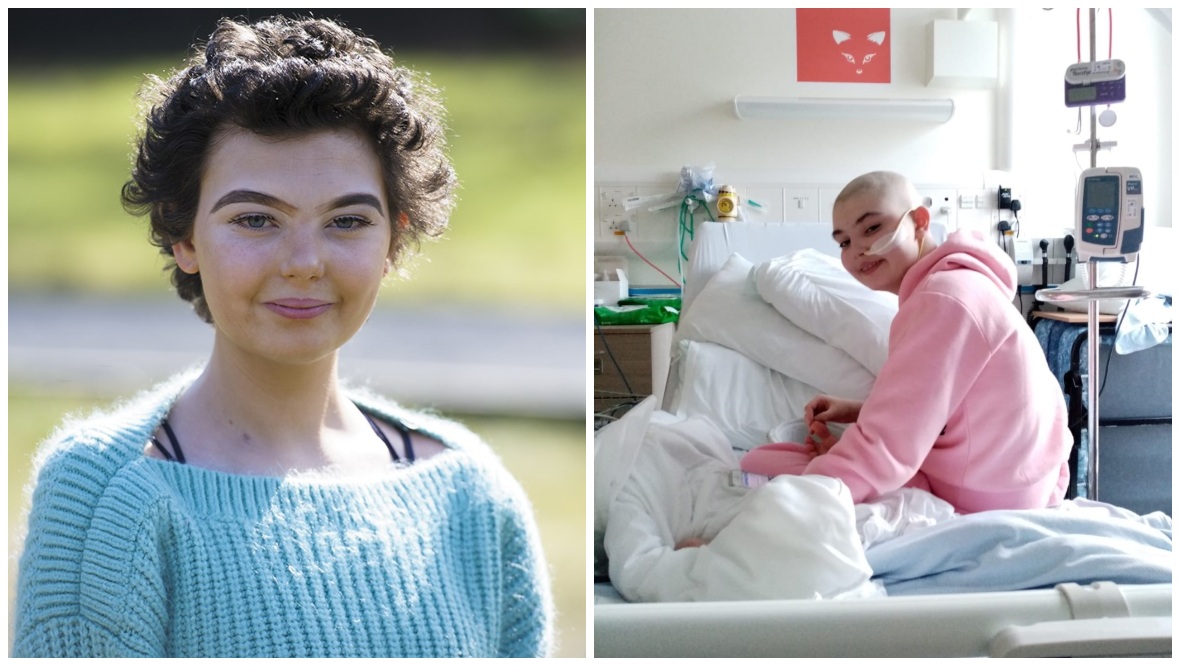 A teenage cancer sufferer has had her life saved by a stem cell transplant after a donor was found during lockdown hundreds of miles away in Europe.

Abbe Ferguson, 13, is now in remission after the stem cell transplant from the stranger was a success.

The donor’s cells were harvested at the height of the first Covid-19 wave last spring then flown across the Channel to the Royal Hospital for Children in Glasgow, where Abbe had the life saving transplant on June 2 last year.

“It’s difficult to find the right words to thank my donor. She’s given me back my life.

All we know is that the donor is female, from Europe and she made the donation during the pandemic.

“I remember feeling very sad when I was told I had cancer. There were times when I felt angry and asked, ‘why me mum?’

“Now I’ve been through that cancer journey it’s important to me to help others. I’d like to be a cancer nurse working with children when I leave school as I know what it is like to face cancer.”

Abbe was supported through her cancer battle by her mum Lynn, dad John and sister Ava.

Lynn says their world was turned upside down on December 13 2019 after tests revealed Abbe had acute myeloid leukaemia, a cancer that starts inside the bone marrow, the soft tissue inside bones that helps form blood cells.

Mum Lynn said: “I broke down at that point.

“The doctors at Crosshouse hospital had told me they suspected leukaemia but I’d still been praying it was something else. As a parent I was like, ‘where do I turn, what do I do?’

“My beautiful brave daughter had the fight of her life on her hands but she never once complained. She just got on with it and worked hard to get back on her feet.

“Abbe was in hospital for nine months and for the majority of that time was in strict isolation. She missed her friends so much and being in hospital during the first lockdown was frightening.

“It felt like we were living through a nightmare. I can’t fault the NHS at all though, they were brilliant.”

Just days after Abbe’s 13th birthday, which she marked in hospital with cake and balloons, a perfect match was found.

The teenager underwent a conditioning treatment to kill off her bone marrow in preparation for receiving the donor’s healthy cells which would reboot her immune system and hopefully stop leukaemia cells from growing again.

The transplant of stem cells, which was administered into Abbe’s bloodstream through a drip, went ahead on June 2.

Mum Lynn said: “It felt like the best thing ever to know they had found a perfect match for Abbe, just total relief.

In January, tests showed the transplant had been a success and Abbe was in remission.

Now Abbe is urging Scots to Race for Life at Home this spring and carry on the fight against cancer, by running, walking or jogging 5K in April for Cancer Research UK.

Cancer Research UK is predicting a £300m drop in income caused by Covid-19 over the next three years which could put future medical breakthroughs at risk.

All 400 mass-participation Race for Life events across the UK were cancelled last year due to the coronavirus pandemic, with this year’s spring and summer events also postponed.

Every year around 32,400 people are diagnosed with cancer in Scotland and one in two people in the UK born after 1960 will get cancer in their lifetime.

Lisa Adams, Cancer Research UK’s spokeswoman for Scotland, said: “We’d like to thank Abbe and her family for sharing their story.

“The truth is, Covid-19 has slowed us down.  But we will never stop and we are absolutely determined to continue to create better cancer treatments for tomorrow.

“Even though we have to Race for Life differently this spring, nothing is going to stop us running, walking or jogging to raise money to help beat cancer.

“That’s why we need as many people as possible to sign up to Race for Life at Home this April, to stand united and do something extraordinary to help beat cancer.”