‘Takeaway’ medicine given to drug users at risk of overdose 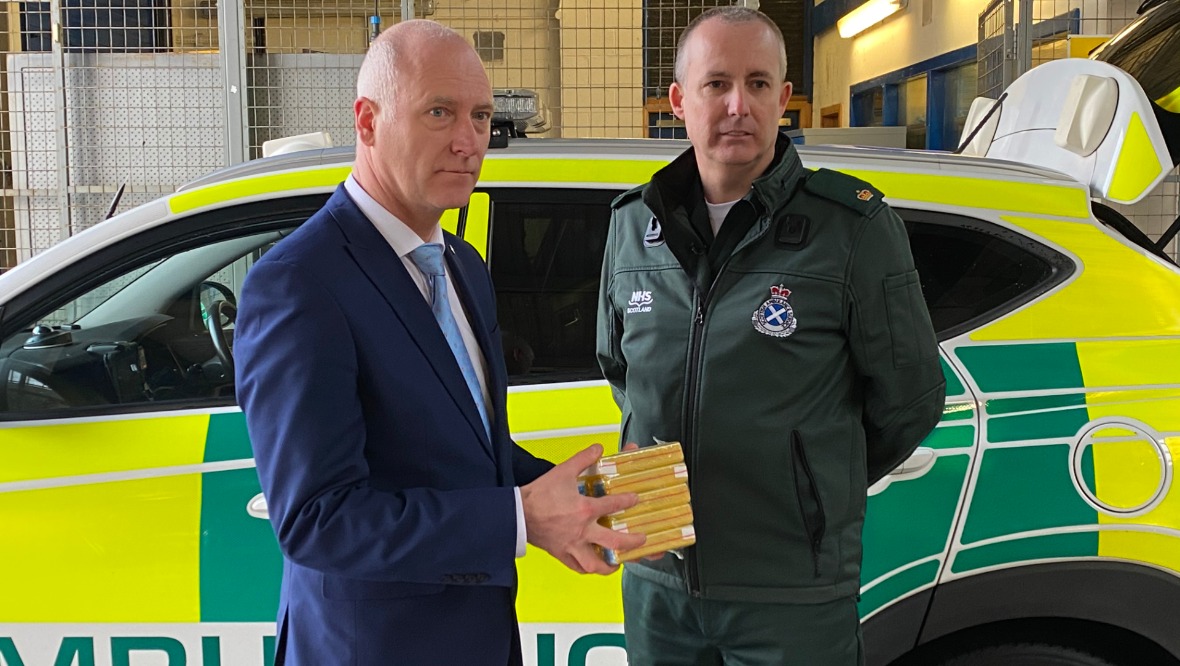 By Jenness Mitchell and Louise Scott

Paramedics will issue life-saving medicine to patients at risk of an overdose as part of a new scheme to tackle the country’s rising drug-death epidemic.

Scotland’s Drug Deaths Taskforce has funded a three-month ‘take-home naloxone’ trial in Glasgow, which will see anyone who suffers an overdose and doesn’t want to go to hospital given the medication.

The naloxone – which can reverse the effect of an opioid overdose – can then be used in the event of any future overdose before the ambulance arrives, reducing the risk of death.

Five hundred kits have been provided to the Scottish Ambulance Service for the Glasgow pilot.

If the trial is a success, it has the potential to be extended to other areas across the country.

Paramedic Gary Rutherford told STV News training would be given on how to use the kit – which holds enough for five doses – and claimed the scheme was a “crucial intervention” in tackling the country’s drug crisis.

He said: “This is the medication that reverses the potentially fatal effects of an opiate overdose.

“The earlier it’s administered, the less likely [the] overdose situation [will be] fatal.

“So if a bystander can administer this while phoning for the ambulance, then it essentially starts the treatment that the paramedics would start a few minutes earlier.”

In 2018, there were 1187 drug-related deaths registered – 253 more than the year before, or a 27% increase, according to the National Records of Scotland (NRS).

By council area, Dundee City Council had the highest number of drug deaths per head of population over the last four years.

Last year’s figures showed a drug deaths rate nearly three times higher than that of the UK, and among the worst in Europe.

Scotland was the first country in the world to introduce a national naloxone programme.

Between 2011 and 2016, the Scottish Government provided more than £1m funding.

The programme came to an end following the introduction of new legislation which allowed certain drug and alcohol treatment services to provide take-home naloxone to those who requested it.

The Scottish Government now works with NHS health boards and local partners to ensure provision remains a priority and is accessible to those who most need it.

The Scottish Drugs Forum (SDF) believe the drug deaths rate would be higher had it not been for the national programme.

She hopes the pilot project will reach those who haven’t had access to naloxone before, as well as those who are not known to support services or those who have lost contact.

Ms Horsburgh told STV News: “In the midst of a public health emergency regarding the numbers of drug deaths, we can’t afford to be complacent with the naloxone programme and it’s essential that people who are likely to witness an overdose have access to it.”

The new scheme was revealed by public health minister Joe FitzPatrick at the Scottish Ambulance Service’s Springburn depot on Wednesday.

He said the scheme was one of a range of actions the Drug Deaths Taskforce “is taking to address the public health emergency Scotland faces in terms of drug-related deaths”.

He added: “We know from the evidence that having naloxone available can and does save lives, but we also know from our database that around half of those whose death was drug-related had also suffered a non-fatal overdose at some point.

“Supplying naloxone kits through our teams of paramedics following a non-fatal overdose is just one more important action we can take to provide support to people at a time of crisis.”