'We can't describe our happiness at being together in Scotland' 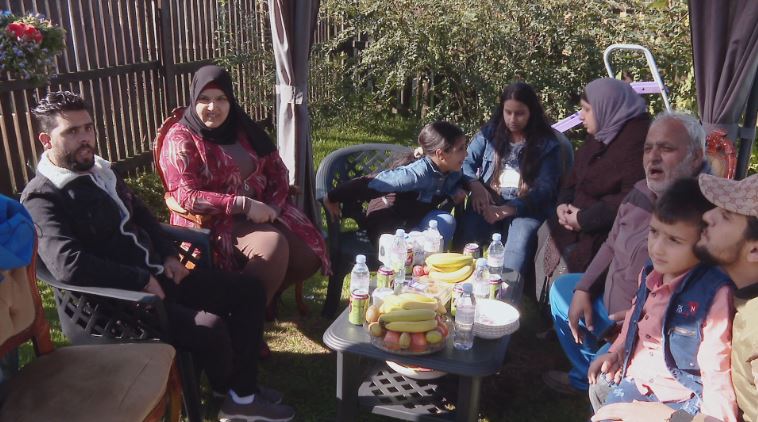 A Syrian family who were separated for more than six years have been reunited in Scotland.

Nidal Ali Al Naboulssi and his wife Aminat fled war in Syria in 2017, making their home in East Dunbartonshire.

They’ve now been joined by one of their daughters, her husband and two of their sons – as well as their grandchildren.

“I felt so happy to see them because I haven’t seen my daughter in six years,” Nidal said. “I cannot describe the happiness I felt.”

However, there was also sadness for the couple because their three-year-old grandson Mohamad was not with them.

STV News previously reported that he died in a refugee camp in Lebanon while his grandparents fought to bring him to safety in Scotland.

His grandfather, who never got to meet Mohamad, told of his heartache after a Home Office error saw him receive a letter rejecting a reunion – after the boy’s death.

The toddler’s mum Battoul Nidhal Alnaboulsi said: “I’m happy to be here to see my family, but I know if the visa had arrived earlier, we would all be together.

“In Lebanon, I remember trying to keep him warm to save him, but there was nothing for him. I was using my headscarf to try to cover my child.”

While most of the family have been reunited, Nidal and Aminat’s second daughter remains in Lebanon waiting for her visa along with her two young sons.

To add to the family’s tragedy, the boys’ father died earlier this year after attempting to travel across the Mediterranean to find a safe new home.

Usman Aslam, from Mukhtar & Co Solicitors, the lawyer who helped the family with their visa applications, said: “This process has taken nearly two years, it’s been a privilege to help this family, but it’s also been heartbreaking to hear some of the stories.

“I was out in Lebanon speaking to Syrian refuges a few years ago, I saw their suffering.

“We have to remember that Lebanon is a small country, it’s about the size of Dumfries and Galloway and has nearly two million Syrian refugees stuck there.