Swinney: ‘Silence from Rangers was deafening’ 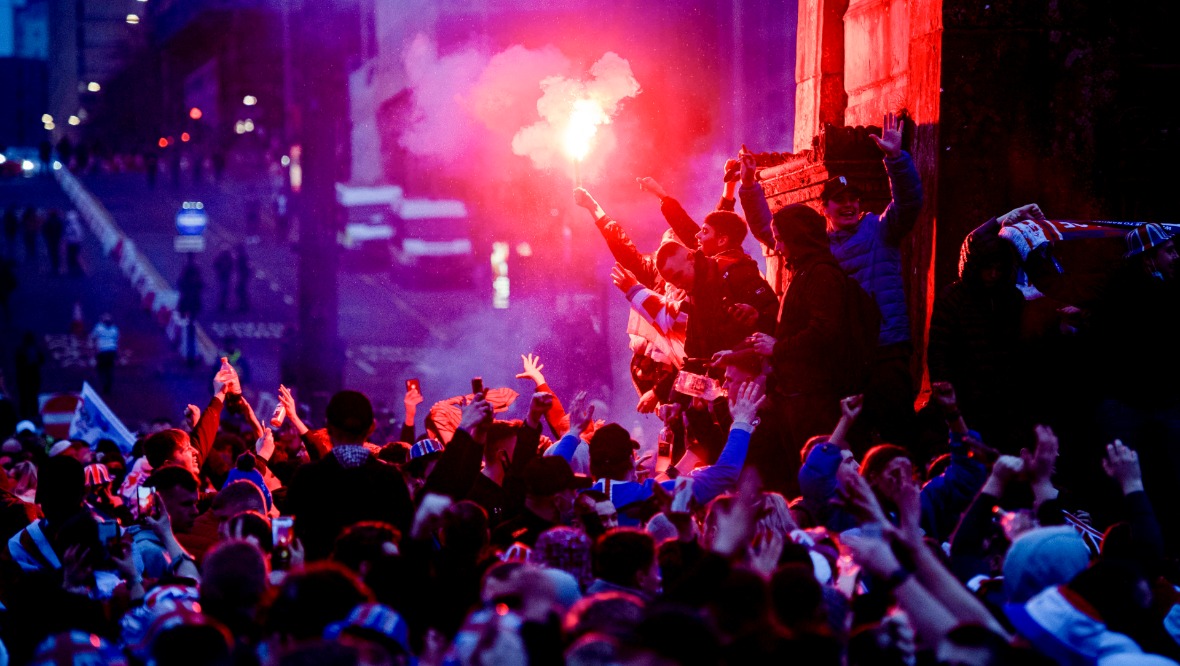 He also criticised them for not telling fans to go home as thousands gathered for celebrations outside Ibrox and in George Square.

Police said they made 28 arrests, while officers were assaulted as they tried to control the crowds.

Memorial benches were damaged, while fireworks were let off and rubbish was left strewn across the square.

The First Minister Nicola Sturgeon said the crowds had put the planned loosening of lockdown restrictions at risk.

And the chief medical officer Gregor Smith warned that a spike in coronavirus cases linked to the celebrations was possible.

Swinney, meanwhile, said the Scottish Government would be making clear its “extreme disappointment” in a “lack of leadership” from Rangers.

Speaking at the daily coronavirus briefing, he said: “The government and Police Scotland reminded Rangers of the need for the club to remind fans to adhere to the current restrictions in discussions on February 26 and March 5.

“It is a matter of profound regret that that did not happen.

“The Scottish Government will be making our extreme disappointment at the lack of leadership clear to the team management.”

The Deputy First Minister said Rangers should have made a clear statement telling fans to stay at home.

Swinney said: “I think it would have been the duty of Rangers to say clearly and simply to fans that they shouldn’t have come out to celebrate and when they did they should have gone home.

“The silence from Rangers was deafening – that’s a matter of profound regret.

“If the club, on a day which I acknowledge is a day of joy for the club, had said to its fans to follow restrictions which are in place – like every other citizen – and had gone home and avoided the crowded scenes that we had outside Ibrox and in George Square…

“The messaging of that type from the club I think could have helped to diffuse the situation and crucially to disperse the crowds.

“But it didn’t happen and that is one of the deep elements of concern that the government has about the conduct of Rangers.”

Rangers said fans had been told to remain socially distanced while celebrating.

A statement read: “We reiterate the message from our manager, Steven Gerrard, who highlighted that fans should adhere to government guidelines – stay safe, socially distance and look after each other in this difficult time.