Staff and children at the Southside primary school share message of 'love and community' after facing onslaught of racist messages. 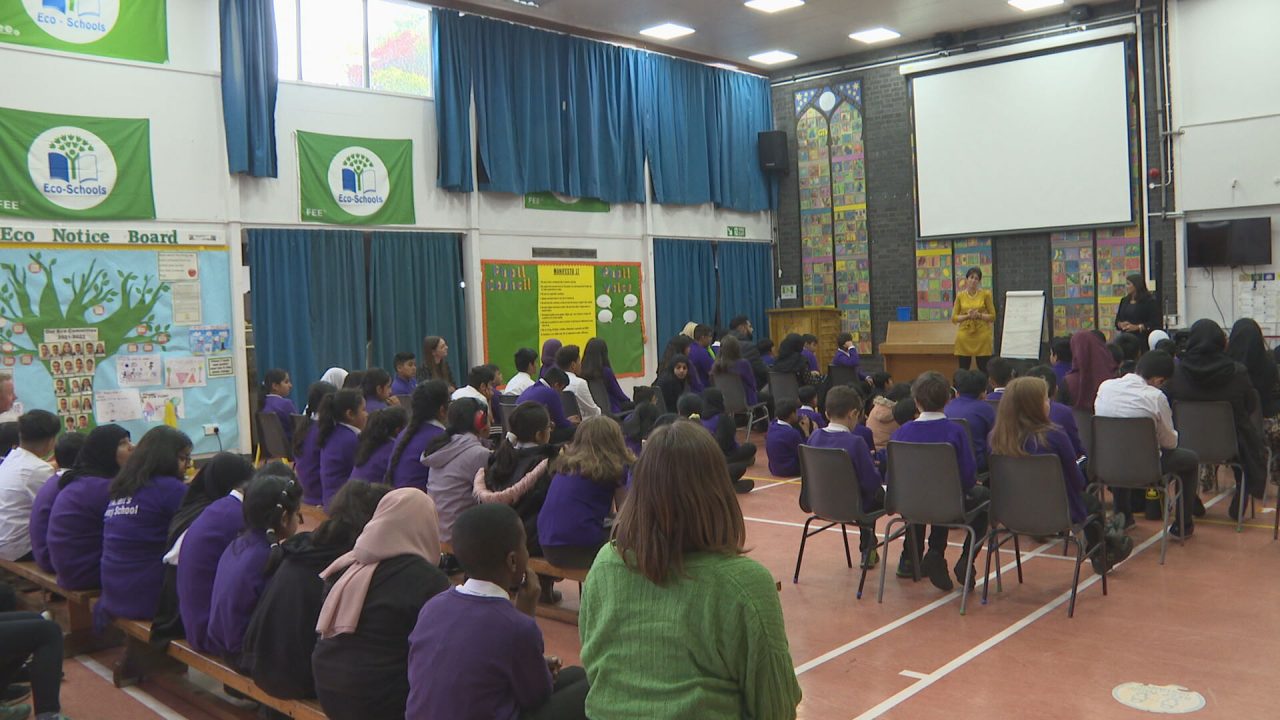 A Glasgow primary school has said they will be standing up to racism after “vile” abuse was aimed at its pupils online.

Glasgow City Council confirmed the abuse has been reported as hate crime and police said they are carrying out investigations.

Now, staff and pupils are working to promote a message of love and community as support has flooded in from across Scotland.

Muhammad Mahboobsial, a P7 pupil, said he loves his school because of its diversity.

He told STV News: “One of my friends joined in P3 and he spoke Arabic, but we made friends with him and let him play games with us. No matter what religion you are, we will be caring to you.

“This school has a lot of religions. It’s diverse and it’s really important.”

Haadiya Isaque, a representative of the Pupils’ Council, added: “It’s a very inclusive school – every single person, no matter what language they speak or where they come from, will be accepted here.

“Over the weekend some people got some chalk and drew love hearts in front of our school. Our class were also making posters learning about racism.”

STV News previously reported the school was targeted with shocking racial abuse after a picture of pupils meeting the First Minister was shared on social media on Friday.

The school had been celebrating the success of an assembly tackling climate change.

Sturgeon was among the first to condemn the abuse on Saturday, tweeting: “Every brilliant young person and every member of staff @StAlbertsG41 is worth a million and more of the vile racists who hurl abuse at them.

“It’s my privilege to represent the wonderful, multi-ethnic, multi-cultural Southside of Glasgow. I stand with them, always.”

Headteacher Clare Harker said she was saddened seeing the racist tweets flood in over the weekend but said “enough is enough.”

She said: “It made me feel hurt on behalf of this community – but it made me determined to effect the change we want to make.

“We are clearly promoting a message of love, changes in the community and systems where our children are left out. We need to make sure we’re looking after people who have experienced this all our lives.

“The best part has been the empowerment of parents as protectors of their children – and people who have experienced racism all their lives – they’ve decided enough is enough.”

Mum Fatima Ishtiaq said parents council and staff are determined to protect their children and said “we won’t take this, we won’t stand by this.”

“We were just shocked, disappointed and angry by what was said and the level it went to,” she added.

“I asked my son what makes him Scottish and he answered, ‘I drink Irn Bru.’ This is the innocence of these children that were being picked on.

“I’m so proud of the staff and pupils for getting the message out there: ‘We are the children of St Alberts and we won’t take this.”