Six arrested after 'unacceptable' disorder and violence at Ibrox

Police say a total of 70 people were refused entry and 21 were ejected from the stadium on Sunday. 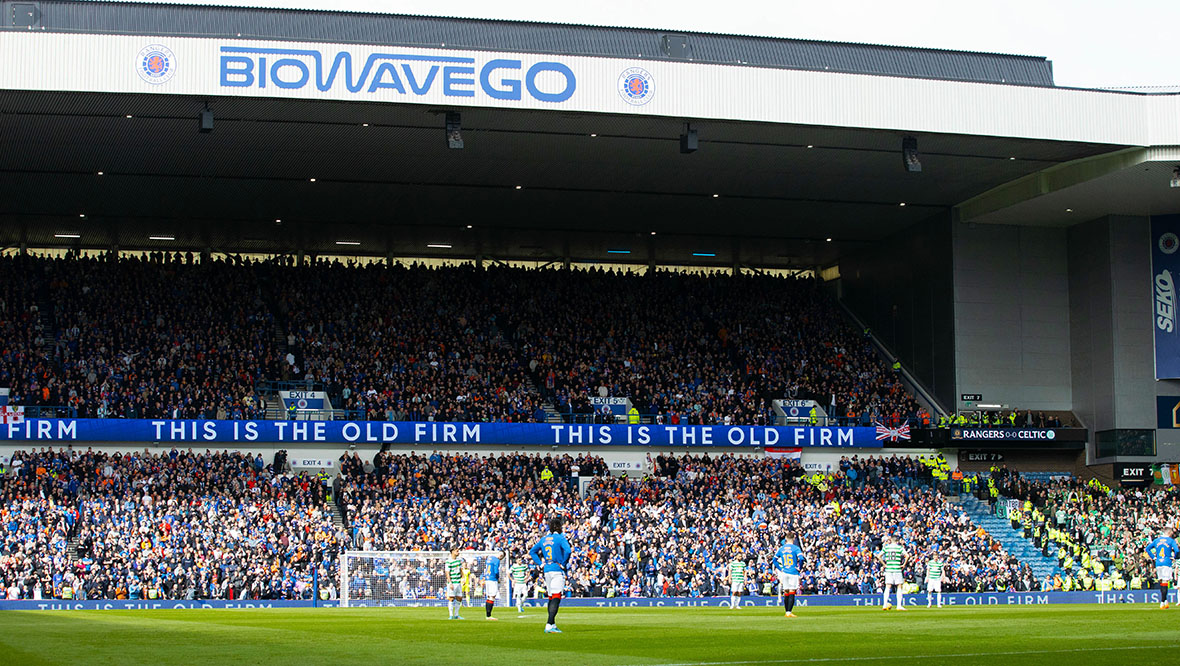 Police Scotland has condemned the “completely unacceptable” disorder and violence at Sunday’s Premiership clash between Rangers and Celtic.

Officers made six arrests for a range of incidents in the lead-up to and during the Old Firm match at Ibrox, while dozens more people were either denied entry to the stadium or ejected.

A number of missiles were also thrown from the stands, including two separate incidents involving glass bottles.

Assistant chief constable Mark Williams said: “The disorder and violence shown during the game on Sunday was completely unacceptable.

“All the relevant authorities must work together and with genuine fans to prevent incidents such as this in future. There is no place in Scottish football for this type of behaviour.

“We are continuing enquiries into a number of incidents that took place during the game, which includes the serious assault of a Celtic physiotherapist who was hit with a glass bottle. We would ask anyone with information to contact police via 101.”

Three men were arrested and charged in connection with vandalism at Ibrox stadium in the early hours of the morning before Sunday’s Old Firm clash.

The men – aged 18, 22 and 25 – were arrested after police responded to a large group gathered outside the stadium at around 2.45am on Sunday morning.

Officers say enquiries are ongoing to trace others involved, as well as several other incidents that took place inside the stadium.

A total of 70 people were refused entry to Ibrox and 21 were ejected from the stadium.

The start of the second half was delayed when Celtic goalkeeper Joe Hart pointed out shards of broken glass in his goalmouth after a bottle was thrown onto the pitch, while other objects rained down when visiting player Jota was taking a corner kick.

A member of Celtic’s backroom staff later required stitches after being struck in the head while making his way towards the tunnel as the visitors won the match 2-1 to move six points clear of Rangers at the top of the cinch Premiership with six games to play.

No arrests have yet been made in relation to the bottle incidents but three other arrests were made around the stadium for various offences on Sunday, including for breach of the peace (sectarian) or with religious aggravator, assault and drugs offences.

“It’s mindless, thuggish behaviour and it has no place in any civilised society.”

She told LBC: “This sort of behaviour is not acceptable.

“Whether it happens at a football match or in the street, people throwing glass bottles is just not acceptable. It’s mindless, thuggish behaviour and it has no place in any civilised society.

“Regardless of what team you support, I’m not the world’s biggest football fan and not just because my team is Ayr United, but people should be able to enjoy football.

“Football should be something that people can take their kids to and have a happy, joyful occasion.

“Behaviour like that whether it’s at an Old Firm match or any other football match besmirches that, and it should absolutely be seen as unacceptable.”

Rangers supporters liaison officer Greg Marshall has called for help to identify the person responsible for the shattered glass in Hart’s goalmouth.

He tweeted on Monday afternoon: “We are working with Police Scotland to identify the individual who threw a bottle onto the pitch at half-time yesterday.

“This delayed the start of the second half and put players safety in danger. Anyone with information can pass details anonymously to either the club or police.”