Assistant chief constable says there are 'plenty of armchair critics' as he praises 'first class' policing operation at weekend. 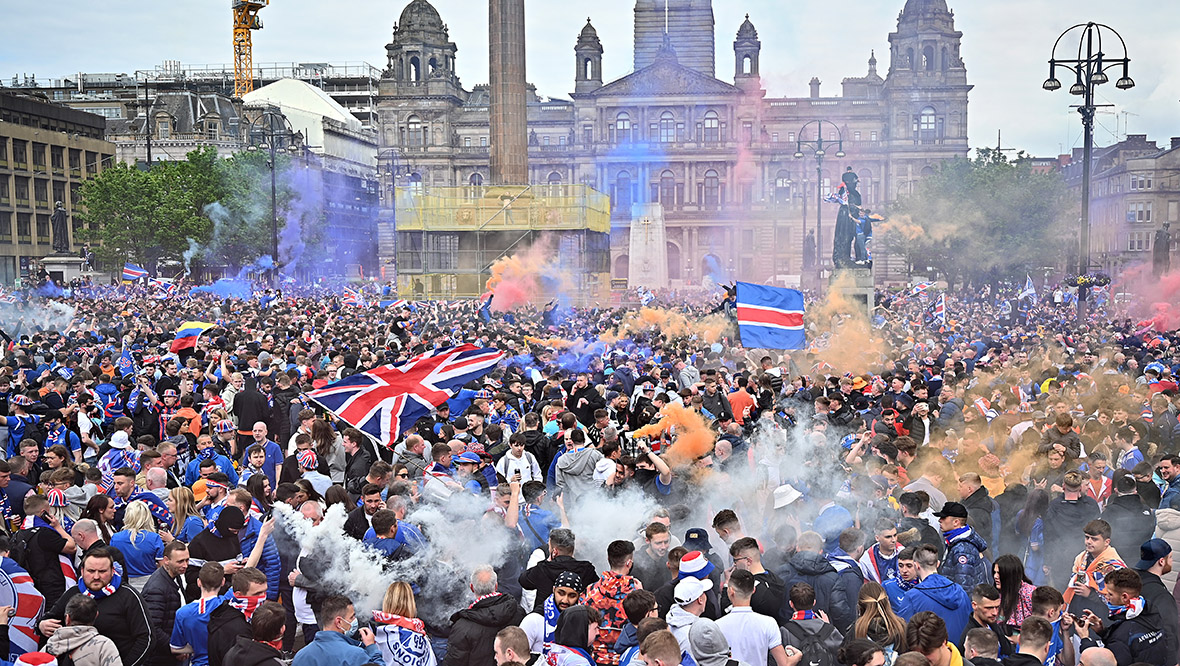 A senior police officer has defended Saturday’s operation to contain violent scenes in Glasgow’s George Square, where thousands of Rangers supporters had gathered to celebrate their club’s Premiership victory.

Assistant chief constable Gary Ritchie told Scotland Tonight the operation was “first-class” and was “balanced and proportionate throughout the day”.

Five police officers were injured and 28 arrests were made as a result of Saturday’s disorder, which came after the Ibrox side were presented with the Scottish Premiership trophy after completing the league season undefeated.

The scenes have been heavily criticised by political leaders, police officers and council officials.

The Scottish Police Federation said officers on the ground had told them they faced the worst violence they had dealt with in 20 years.

Ritchie said: “There’s plenty of armchair critics out there (who) can just look at the scenes that they see on their TV or on their laptop and make decisions.

“But in actual fact, I think the policing operation was first class and I think it was balanced and proportionate throughout the day.

“Every single one of the 15,000 people that came out at the weekend – to gather at Ibrox or in the other demonstrations and protests – did so selfishly in contravention of the rules and the regulations that were put in place to try and keep the people of the city safe.

“They (police officers) were shocked and definitely affected by the violence that they faced on the day – it was unusual. However, they acted extremely professionally in the face of that aggression.”

A special team of police will investigate the incidents that took place at and around George Square in Glasgow on Saturday.

The dedicated inquiry – named Operation Shearling – will track those involved using CCTV, video and photographs from the scene.

An online portal has been set-up so that the public can send detectives any video footage or photographs of incidents that took place on May 15.

Rangers said on Monday a “small minority of people behaved inappropriately and in a manner not reflective of our support” after thousands of fans defied Covid-19 warnings against large gatherings and massed in George Square at the weekend.

The club issued a statement condemning the scenes, describing them as “unacceptable” saying they “besmirched the good name of Rangers Football Club”.

Images on Saturday showed George Square strewn with hundreds of broken bottles, plastic bags and spent flares after flag-draped fans had been seen attacking each other and launching traffic cones, plastic bollards and other missiles at lines of riot gear-clad police officers.

Deputy first minister John Swinney said on Monday “every exhortation was given by Police Scotland, the Scottish Government and Rangers Football Club” as he condemned the action of fans as “absolutely reprehensible”.

First Minister Nicola Sturgeon said she had been inudanted with messages about the “disgraceful scenes”.

Meanwhile, Scottish FA President Rod Petrie said the images “represent an abomination, not a celebration”, adding they “brought embarrassment to the national game”.

He said in a statement: “While the majority of the club’s fan base will have celebrated this achievement safely and in line with COVID-19 guidelines across the country and beyond, the scenes witnessed in and around Glasgow’s George Square have brought embarrassment to the national game.