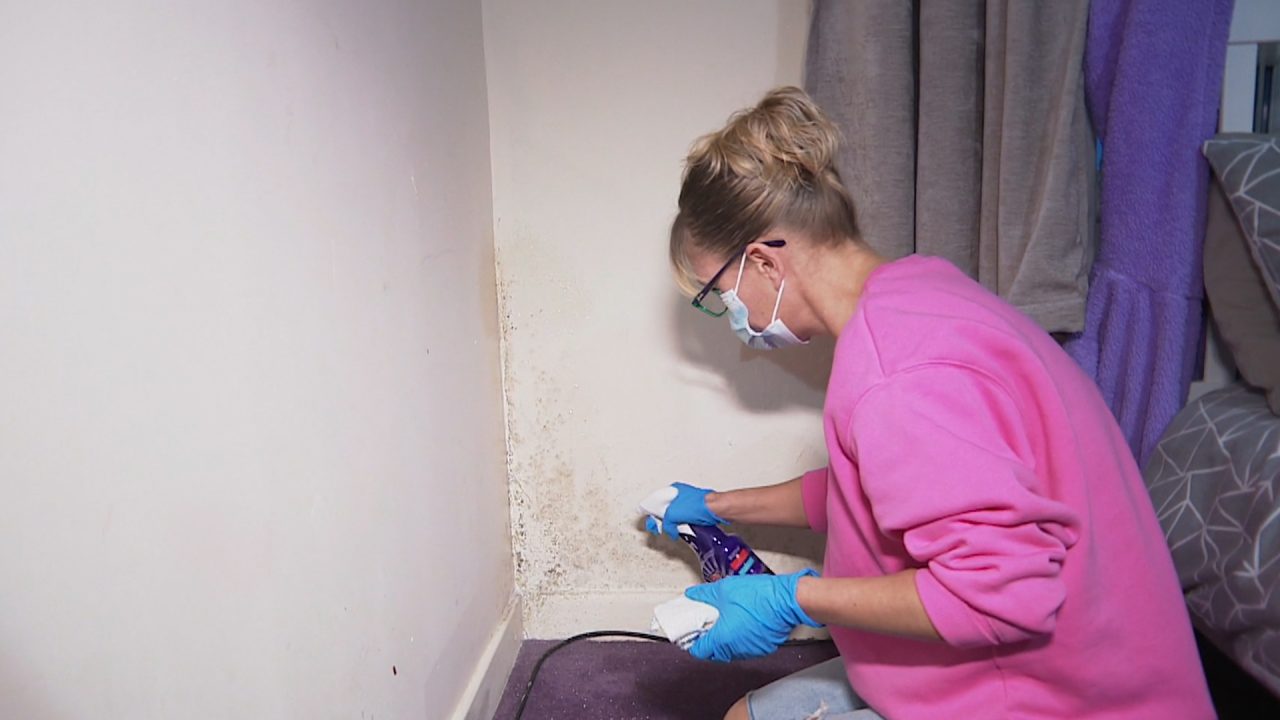 “I don’t want to live here anymore” – the words of Louise Coyle, a single mother whose family home is slowly being destroyed by damp and mould.

No matter what she does – from having every window and door open, to scrubbing the walls with bleach every day – nothing prevents thick black spores from popping up.

“It’s coming through the carpets or flooring, on the beds, mattresses, wardrobes, chest of drawers,” she tells STV’s Scotland Tonight.

“The dampness seeps through so I’m having to peel wallpaper off or repaint it. It doesn’t matter what I do, so I don’t paint, I don’t paper it. And I feel bad because my kids are asking ‘mum, can we decorate this?’.

“I would love to be able to do it. I’d love to be picking wallpaper, and paint, and get a nice carpet and rug, but I don’t see the point because it’s all getting destroyed.”

Louise is so scared about the impact both her cleaning and the mould could have on her family that her two youngest children, Jade and Erin, aged ten and 11, are currently sleeping in the living room.

“I go to bed, hardly sleep for worrying, then I’ll get out my bed, check and check, and then I’ll go back to bed, and if I don’t do it, what are my kids breathing in?” she says.

“They’re breathing it in on a daily basis anyway, a cross between bleach, dampness and all the rest of it.

“They’re not sleeping in the bedrooms because of it. My 11-year-old is suffering health problems through asthma – so I’m not going to put my kids through that. The only place that seems safe is the living room, so my kids sleep on the couch.”

The family have spent almost £8,000 of their own money trying to fix the problem at their council home in Kilsyth, North Lanarkshire, as well as replacing bedding, clothes, furniture and carpets.

“That might not seem a lot to other people, but it’s a lot to me,” she says. “When I’m a single parent with three children, it is a lot. I’ve not got the money to keep replacing.

“My clothes stink of dampness. I can even sometimes feel it on my skin. I know that sounds terrible, but it’s in the air all the time. And I feel yucky.”

Figures from charity Shelter Scotland show that almost one in ten houses in Scotland is suffering from dampness or condensation, or both.

And more than 50,000 homes have an issue with rising or penetrating damp.

Meanwhile, doctors warn that long-term exposure to damp and mould can have serious repercussions for health

“It can be fatal if you are exposed to heavy levels of mould over a long period of time. And it I guess the saddest reality is that this is an issue that’s facing many people across Scotland in 2023,” Dr Punam Krishan, a GP from the central belt, tells Scotland Tonight.

“It gives off spores, these spores then fly off and can launch into our airways and our lungs, and over time, people will have symptoms that can range from things like irritated eyes – itching, runny eyes – to congestion of the sinuses, repeated chest infections.

“But if you have underlying health conditions, like lung conditions or heart conditions, it can be potentially fatal.”

As well as the physical health impacts, living in sub-standard housing can also have a significant affect on mental health, with Dr Krishan now seeing a significant number of patients who can’t sleep due to stress.

“It’s not fair,” she says. “And it’s not right, it’s almost inhumane to live in some of the conditions I’ve seen, where the walls are covered in mould.

Last year, an inquest into the death of two-year-old Awaab Ishak in Rochdale was directly linked to his exposure to mould.

A post-mortem showed evidence of fungus in the toddler’s lungs and blood, and Dr Krishan is worried something similar could happen here.

“It concerns me that this is even an issue that’s on the table,” she says. “But I feel that if we carry on just ignoring the plight of these people, it’s going to cause another tragedy and it doesn’t really need to get to that.”

North Lanarkshire Council said repairs had been delayed because workers were denied access to Louise’s home.

But she said they had turned up without advance notice at times she was unavailable.

The council spokesperson said: “We have carried out extensive works over the past four years to try and resolve underlying damp issues affecting Ms Coyle’s home.

“Repairs have been delayed on a number of occasions as the tenant has not allowed our contractors access to the property. It is important tenants allow us access to complete repairs to avoid the issue getting worse.

“Following an inspection on January 18, further repair work has been arranged and will be completed as a matter of urgency with new cavity wall insulation also scheduled to installed.

“The health and wellbeing of tenants is our priority, and we respond to reports of condensation, damp and mould issues as quickly as possible.”

Scotland Tonight is on STV and the STV Player at 8.30pm on Thursday, January 19.