Four apprentices from different walks of life discuss earning while they're learning. 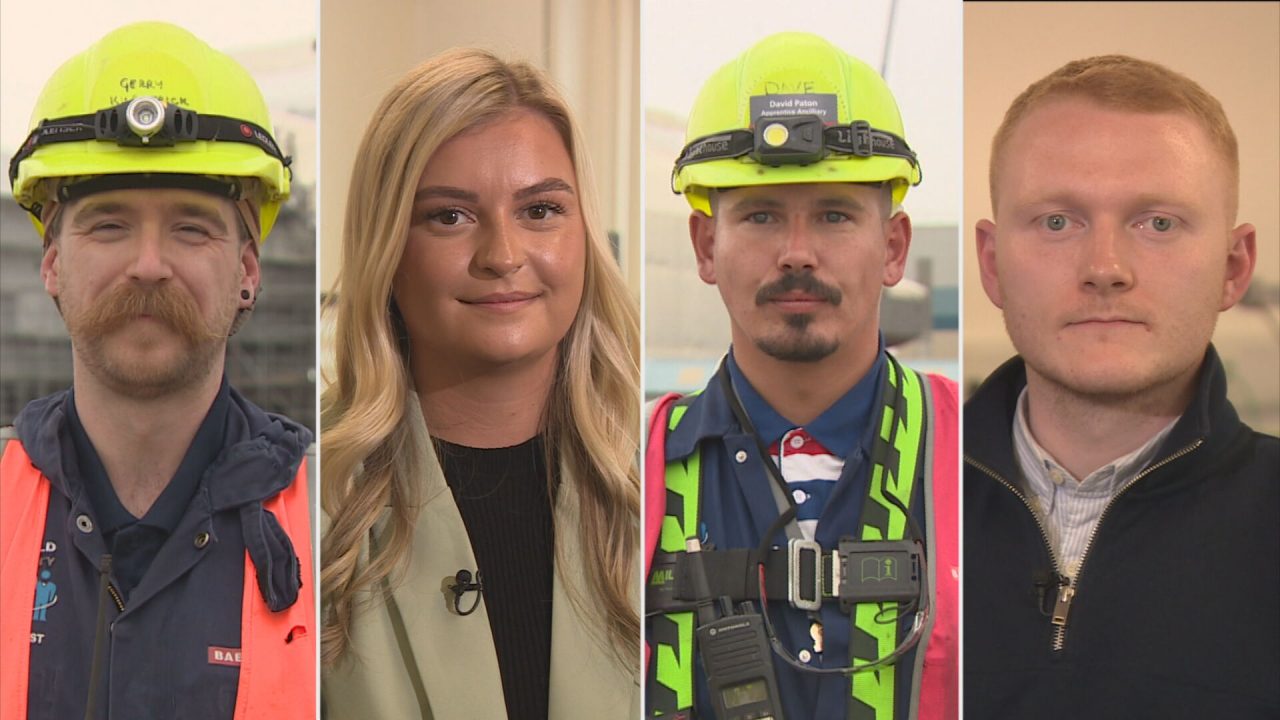 A dad who became a shipyard apprentice aged 30 has urged youngsters to look at different career paths.

Gerald Kilpatrick decided to pursue his long held ambition of getting a trade after spending years in retail, hospitality and as a climbing instructor.

He was accepted after his first interview and is now in the third year of his apprenticeship as a shipwright.

Speaking as Scottish school pupils received their exam results, he said: “Regardless of your age, if you’re interested in trades, offices, logistics, the opportunity is there.

“An apprenticeship is a great way to go about it nowadays. The wages are brilliant and it gets better from there.

“If your job prospects are better suited to manual work, I’d say definitely give it a go or consider it. It’s been life-changing for me.”

Now in his third year, Gerald’s role varies from day to day, involving moving and fitting units, welding and burning.

“I’ve got a family, a one-year-old at home, so it’s good to know I’ve got a future here,” he said. “People say there is no future in shipbuilding, this is proof there is.

“This is one of the last places on the Clyde that still does shipbuilding. There’s a lot of pride in this yard.”

‘No such thing as failure’

Electrical engineering student David Paton recalled how his first application for an apprenticeship at BAE was rejected and he decided to try again the second year.

While he didn’t get his first choice, bosses offered him a role in a brand new ancillary apprenticeship – meaning he could leave his college course and get some hands-on experience in the industry.

“I didn’t have the best results when I left school,” David, 31, said. “If you feel your exam results are not the best, it doesn’t mean you can’t put your name forward and try for things.

“There’s no such thing as real failure, it’s a learning curve at the end of the day. It’s best to keep trying for what you need in life.”

David describes his role as being the “eyes and ears” of the shipyard. It involves getting units safely into position, rigging up jobs from the ceilings using chain blocks and ensuring all equipment has been securely installed.

He added: “You know the purpose of what you’re doing – you’re building this to protect and save lives, putting quality into that ship in a safe way.”

‘Your work is valued’

Karly Mellis was studying maths at university when she began exploring the idea of an apprenticeship at BAE.

Her friend had joined the manufacturing giant as an apprentice engineer and she decided she wanted to learn while earning a full-time wage herself.

The 23-year-old is nearly a year into her supply chain apprenticeship, which sees her working with teams as far away as Australia.

“There are some early mornings to make meetings and keep relationships going in other areas of the business, it’s really exciting and fun,” she said.

“Straight away you get a lot of responsibility. The job you’re doing is valued and you get important jobs throughout the day. You’re not just assisting someone.”

She added: “Once I went in, I knew I’d made the right decision.”

Karly gets the opportunity to work in a range of different departments from operations and project management to finance and liaise with big-name contractors.

She said: “I like the variety, no two days are the same. I get to see different aspects of the business and find out what I enjoy.

“I would definitely say, try not to feel lots of pressure to go only one way. A lot of people think the only step is to college or university.

“More and more companies are opening apprenticeship schemes that are hands on, consider that while you’re learning. Its a great advantage.”

‘Every day is different’

Gary Morrow is entering the second year of his supply chain apprenticeship after studying business at college.

The 23-year-old said he felt pressure to pursue university or college after leaving school but that it didn’t suit him.

“I thought I’d give college a go for a year, but it wasn’t for me,” he said. “I was also working in retail, which wasn’t something I wanted to do long-term.

“I enjoyed the supply chain module at college – I found that really interesting and was intrigued from the get-go. So I decided to look into apprenticeships.”

Gary is part of the major sub-contract programme based in Govan, which involves managing contractors on site and working across different projects.

“Every day is different. I know that’s kind of a cliché,” he said. “It’s really good, fast-paced. The time flies, you don’t know where it goes.”

He urges young people to “always consider an apprenticeship” as an option as university and college is “not for everyone”.

He added: “It’s really enjoyable. I’ve still got two years to go, so I’m going to continuously build on my skills and be the best I can be before I go up through the grades.”