Save ward that let my husband join our daughter’s wedding

A dementia ward in Argyll and Bute faces closure despite relatives, medics and unions all calling for it to stay open. 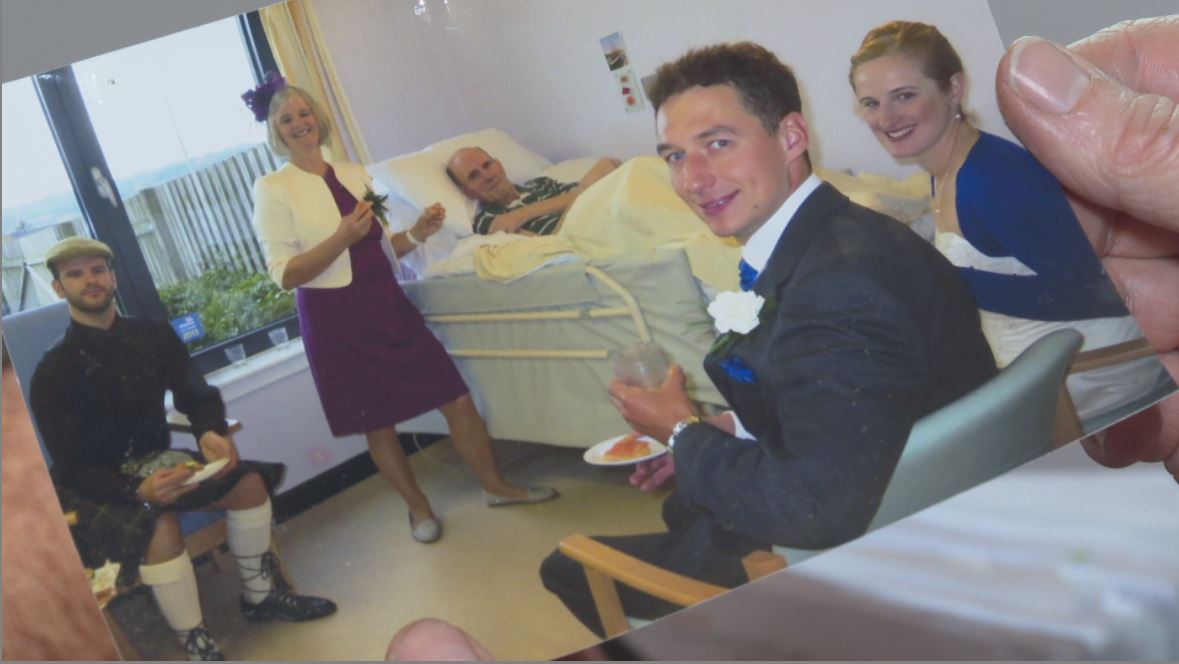 Richard Braithwaite might have missed his daughter’s wedding had it not been for the care he received at Mid Argyll Community Hospital.

And neither would his wife Belinda have been able to see him every day.

But now the Knapdale dementia ward where Richard spent the final years of his life is facing closure.

Belinda cared for him at their home in Lochgilphead until his condition deteriorated to the extent that there was no choice but to admit him to Knapdale.

It was there he was able to play a big role in his daughter’s wedding, as bride and groom celebrated by his bedside.

“If he had been looked after in Inverness or Glasgow I couldn’t have seen him as often as I did,” Belinda said.

“It would have been inhumane to be honest at that stage of his life.”

The rural nature of Argyll and Bute makes it difficult to treat people with complex medical needs in their own homes.

Relatives of dementia patients, as well as medical staff and trade unions, all want to see Knapdale upgraded, not shut down.

Belinda said: “There is such a lack of infrastructure, in mid-Argyll in particular, that this is just an accident waiting to happen.”

The former head psychiatrist for Knapdale raised concerns about the management of the ward – as the health board moved to close it, and, three weeks later, she lost her job.

Jan Calder praised the work done by those employed at Knapdale and said its closure would have a detrimental impact.

She said: “This was an opportunity for health and social care services to work together to meet the needs of people with dementia in Argyll and Bute.”

NHS Highland’s preferred option is for carers to visit patients in their own homes throughout the day.

But critics said that could prove costly and logistically difficult for an area with a scattered population.

“One of the options is an enhanced facility locally, which will provide respite, which would also do daycare, provide admissions and have the enhanced community care,” said Argyll and Bute councillor Douglas Philand.

“That would be the option that will be preferred. There is an increased incidence of dementia, we’ve got an increased older population within Argyll and I think this is a big one..

The Scottish Government said it recognised the concerns and encouraged engagement with the health board.

It said: “In 2018, the Scottish Government commissioned and published a major independent expert report into specialist NHS dementia care.

“It states that resources should over time be shifted into stronger dementia care in the community, so more people with the illness can live at home or in a homely environment for longer.”