Rubbish piles up on streets as Glasgow bin strike goes ahead

GMB members walked out at one minute past midnight as world leaders began to arrive in the city for COP26. 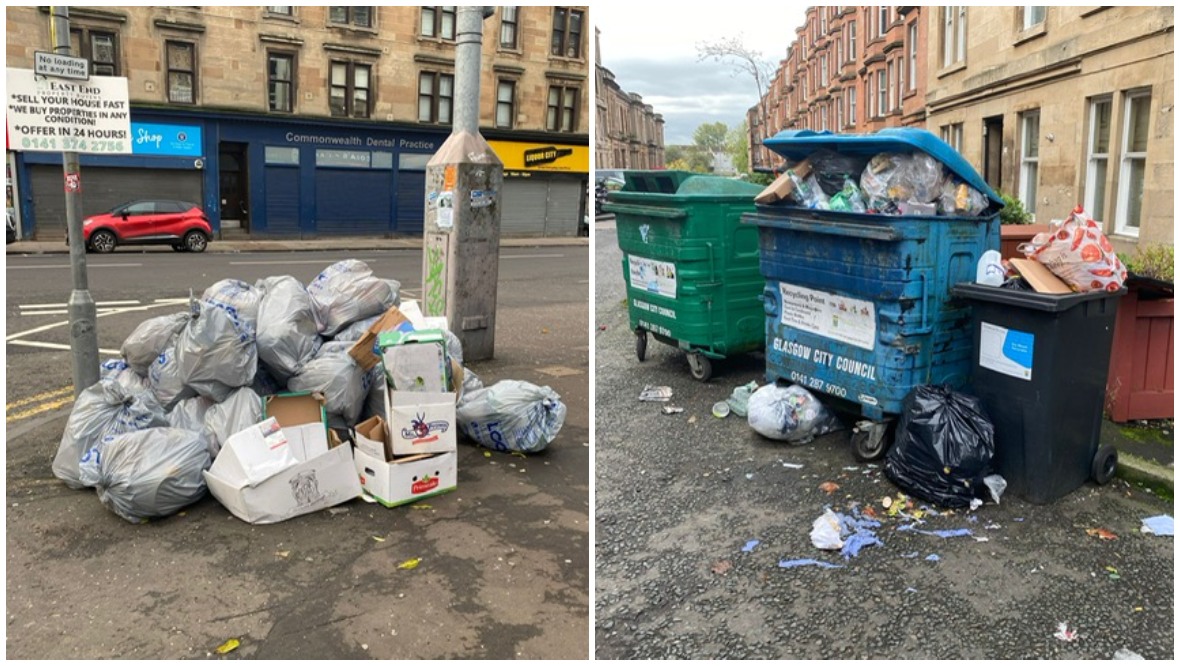 Rubbish has piled up on the streets of Glasgow as bin collectors and street cleaners have gone on strike as the COP26 climate conference gets under way.

GMB members walked out at one minute past midnight as world leaders began to arrive in the city for the climate summit.

The union said the council failed to give members “the proper time and space to consider the 11th hour offer from Cosla”.

On Monday, rubbish could be seen piling up and bins overflowing in Glasgow as cleansing workers did not undertake their usual routes.

The planned strike action was previously called off on Friday after a new pay offer from council umbrella body Cosla. GMB Scotland then said it would suspend the strike for two weeks to consult with members.

GMB Scotland Secretary Louise Gilmour said: “The council has failed to give our members the proper time and space to consider the 11th hour offer from Cosla, and the fact the council moved to block strike action in the Court of Session using anti-trade union legislation, means there is too much bad faith among members towards the employer.

“Therefore, our members in cleansing have informed us that they will still proceed with the planned strike action from 00.01am Monday, November 1.

“We are calling for an urgent meeting with the council as soon as possible and we will work until one-minute to midnight tonight to try and fix this.

“We have also made the Scottish Government aware of the situation and are liaising with the First Minister’s Office, but without any further dialogue the cleansing service in Glasgow City Council will take strike action from tomorrow and throughout the first full week of the COP26 summit.”

The Scottish Government gave £30m to support the offer.

A Glasgow City Council spokeswoman said: “The agreement struck at national level gave two weeks to consider the pay offer and so there is no reason for this strike to go ahead at this time. It is very disappointing the GMB has opted for this course of action.

“It appeared that GMB, along with the other unions had agreed to suspend the strike until national consultation was complete and it is very disappointing they have reneged on that agreement and have not given us the required 14 days’ notice after they publicly announced the suspension on Friday.”