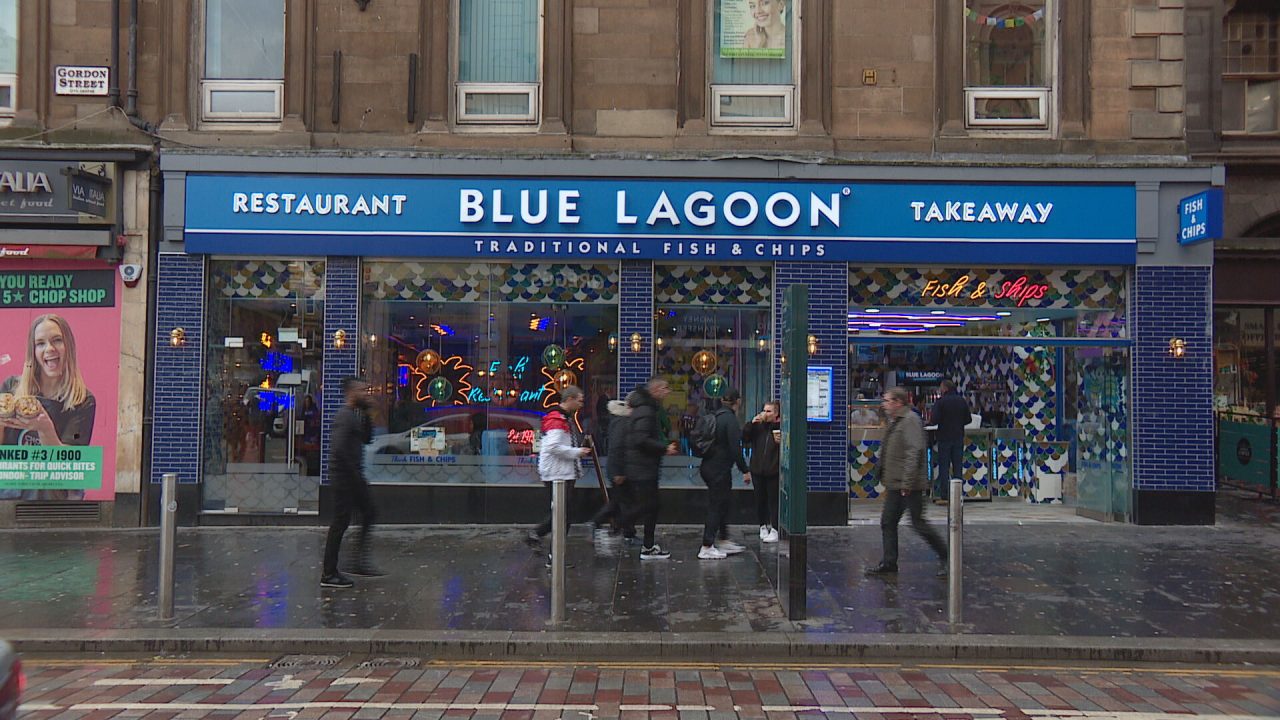 Many Glaswegians have experienced the ritual of standing in the rain outside Central Station with a fish supper from the Blue Lagoon as they try to get home after a night on the town.

The fish and chip restaurant is a stalwart of the city’s food scene, serving hungry punters throughout the day and doing the bulk of its trade catering for those in need of sustenance in the early hours of the morning.

But the twin threats of national rail strikes and soaring energy prices is posing an existential threat to the business.

Drew MacIntyre, area manager for Glasgow Blue Lagoon, told STV News on Monday – the day of a nationwide strike by ScotRail workers – that industrial action was “quite disastrous” for the economic fortunes of the restaurants that he oversees.

“All of our stores – Queen Street, Argyle Street and Gordon Street – are all down by 50% turnover (on the day of strike action).

“During the daytime, we are quite reliant but disastrous on all three stores because people are reluctant to go out and they can’t get home – a lot of our trade comes from the late night (crowd) between 1am and 5am.”

Mr MacIntyre said the disruption by rail strikes is being compounded by high utility bills, and it means that increased costs have to be passed on to the customer.

“[High energy prices] are having a huge impact on us as well,” he said. “Costs and expensive utility bills mean we have had to put our prices up as well, which is not helping our customers – it’s just the nature of the business at the moment.

“It means the staff we would normally have on schedule we don’t have the hours for because turnover is down, it’s quiet all around, people are needing the hours, especially in the current economy.

“Our staff are also finding things tough at home with rising utility bills – obviously they need the extra hours but without the business there it’s affecting them as well.

“Typically, with the takeaway customers we’re getting a fair bit of pushback. While a lot of them are understanding, everywhere the prices are going up, especially fish and chips and takeaways and things like that.

“So a lot of them are understanding but some still come in with the mindset of coming in for a bag of chips for a pound, which is no longer something you can get anywhere.”

The Blue Lagoon restaurant on Gordon Street at the entrance to Central Station has recently undergone a multi-million pound revamp.

“We spent half-a-million pounds on this revamp, so we really need it to work and hopefully leading up to Christmas it (the rail dispute) will get sorted very quickly

“We try and do what we can – we give the train staff 10% discount when they’re in. We’re totally sympathetic toward the train staff, we hope the Government sort this very quickly for everyone’s sake.

“We’re trying our best to make do with what we can and give back to the economy as much as we can.”