Rest and Be Thankful blocked by 6000 tonnes of debris

Car-sized boulders slid down the hillside onto the A83 following heavy rainfall across Argyll and Bute. 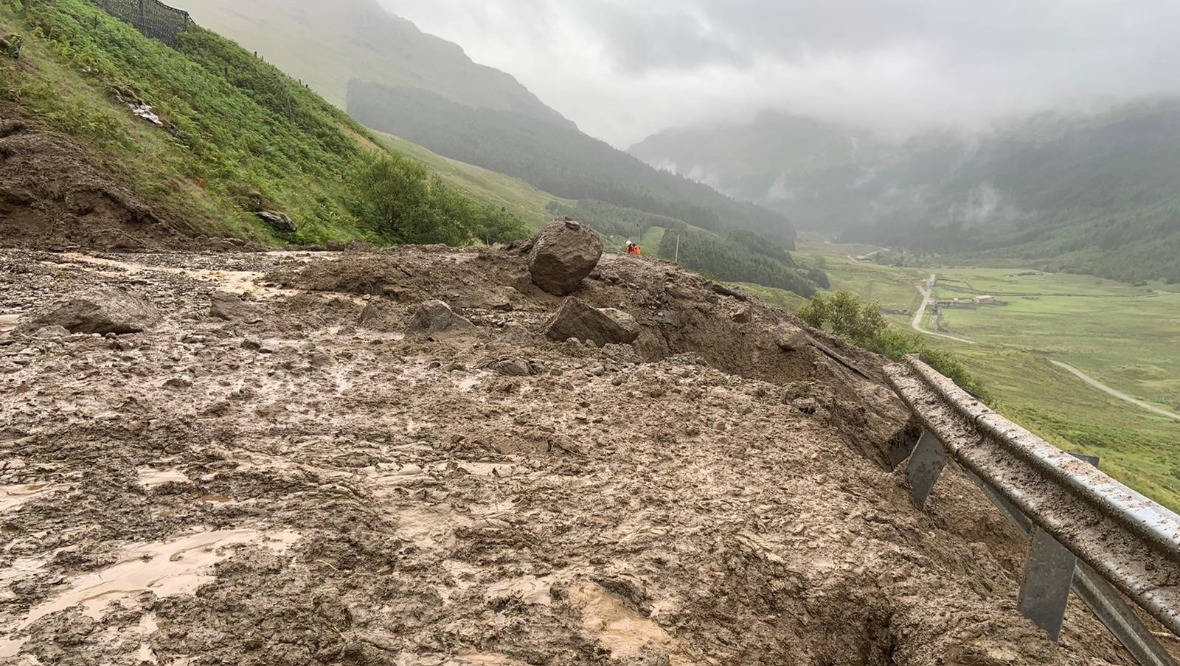 A massive clear-up operation is under way to remove 6000 tonnes of debris that slid down a hillside and blocked the A83 at the Rest and Be Thankful and its usual diversion route.

BEAR Scotland said car-sized boulders were brought down the hillside on to the carriageway, which was closed in both directions on Tuesday following heavy rainfall across Argyll and Bute.

The Old Military Road (OMR), previously used as an alternative route when the main road is impassable, was also shut.

Approximately 1500 tonnes of debris is thought to have reached the A83 and about 2000 tonnes washed on to the OMR.

“Further assessments need to be completed by geotechnical specialists of the hillside and both roads to check for any further concerns, and until these checks and the clear-up is complete the A83 and OMR will remain closed.”

She said: “This is now the second landslide of the year that has closed the Rest and Be Thankful and resulted in disruption to a major trunk road causing havoc for our communities, businesses and visitors.

“It is abundantly clear that mitigation measures taken by Scottish Government have yet again failed the people of Argyll and Bute.

Meanwhile, the West Highland Line has reopened after a landslip forced it to close yesterday between Helensburgh & Garelochhead.

Network Rail Scotland said ScotRail was in the process of restoring services to the route.

A safety inspection was carried out after rising river levels caused concern.

A Transport Scotland spokesperson said: “We understand the frustration this latest incident will bring for local communities and drivers. Our operating company, BEAR Scotland, is working to assess, clear and then reopen the road as quickly as possible, but can only operate when it is safe to do so.

“To date, more than £13m has been invested in landslide measures at the Rest and Be Thankful and the Old Military road, which have helped keep the road open for an estimated 48 days when it would otherwise have closed. This is part of the £79m invested in the wider maintenance and resilience of the A83 since 2007.

“Four roadside catchpits have now been completed, with a total capacity of almost 15,000 tonnes and we are exploring options for further catchpits with more work due to commence next month.

“We appreciate this will be scant consolation to those affected at this time and recognise that a permanent solution is key, albeit challenging, both from an engineering and financial perspective, in the current climate. The next taskforce meeting is due to reconvene next month.”