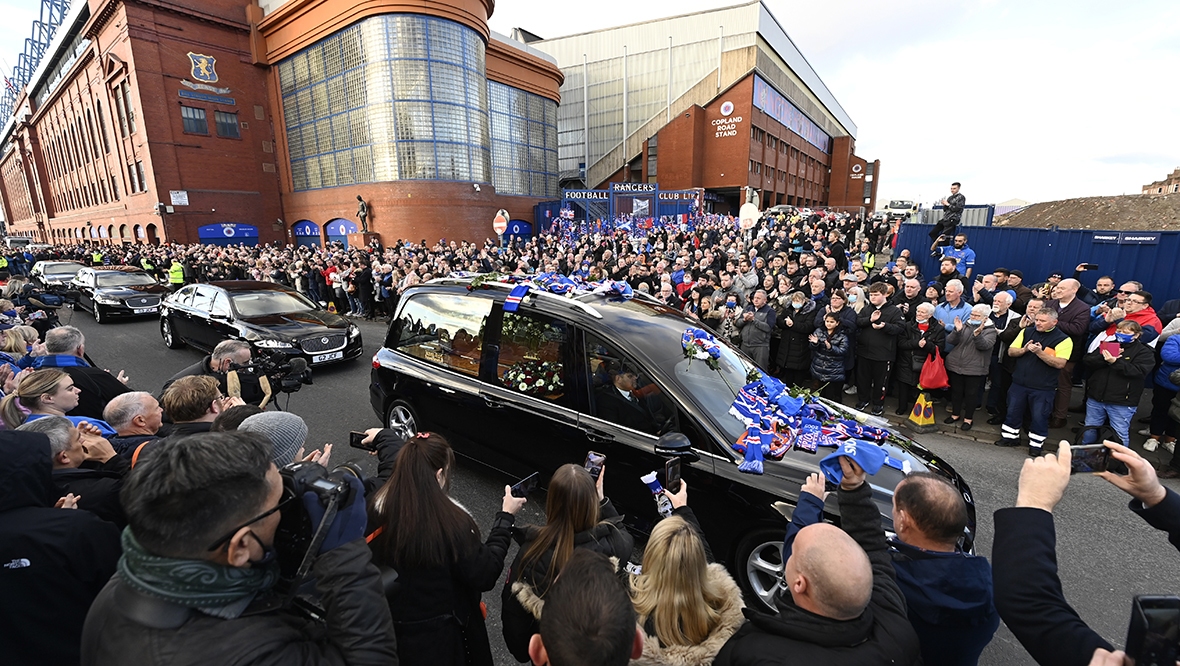 Rangers fans are lining the streets around Ibrox to pay their respects to former manager Walter Smith.

The funeral cortege made its way through Govan ahead of a private family service for Smith, who died last week at the age of 73.

A public memorial service will also take place at Glasgow Cathedral on November 19.

Tributes flooded in from across the football world following Smith’s death.

He won 21 major honours in two spells as Rangers manager.

Rangers said in a statement: “The club would like to put on record its thanks to our supporters, supporters of other clubs and the wider community for their kind words and support at this difficult time.”

Smith’s career in professional football spanned 45 years, taking him to international level and cementing a position among the elite of the club game.

As manager of Rangers over two spells, he won ten league titles, five Scottish Cups, six League Cups and guided his side to the UEFA Cup final in 2008.

Smith was also awarded an OBE in 1997 for his services to association football.

Smith had been suffering from a long illness but still had a major influence on current Rangers manager Steven Gerrard, who fought back tears last week as he declared his mentor had “made me a better person”.

The former Dundee United and Dumbarton player made his name in coaching under Jim McLean at Tannadice, helping the previously unfancied club to the 1983 Scottish league title and the European Cup semi-finals the following year.

After assisting Sir Alex Ferguson during Scotland’s 1986 World Cup campaign in Mexico, Smith accepted an invitation from Graeme Souness to perform the same role at Ibrox.

Smith succeeded Souness in April 1991 and went on to secure a record-equalling nine consecutive titles before leaving in 1998 and joining Everton.

After another spell as Ferguson’s assistant with Manchester United, where he won the FA Cup, Smith served as Scotland manager during 2005 and 2006 before returning to Rangers, where he won another three successive titles.

Rangers chairman Douglas Park said on the club’s website following Smith’s death: “It is almost impossible to encapsulate what Walter meant to every one of us at Rangers.

“He embodied everything that a Ranger should be. His character and leadership was second to none, and will live long in the memory of everyone he worked with during his two terms as first-team manager.”