Heart-warming footage shows the moment grandad Robert Bruce noticed the concealed tickets on the back of his birthday card. 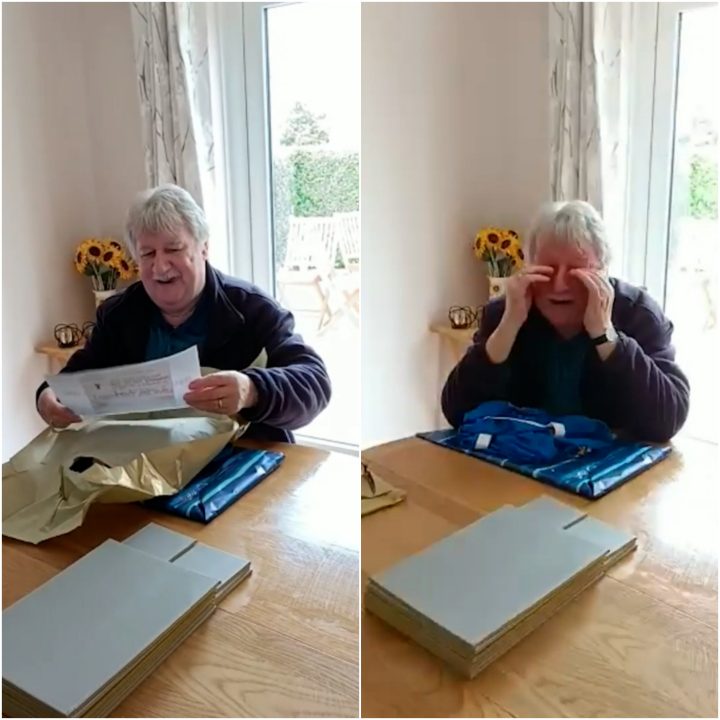 A grandad was left in disbelief after his son surprised him with tickets to watch Rangers in the Europa League Final.

Robert Bruce, 69, has been a lifelong fan of the club and was desperate to travel to see them play against Eintracht Frankfurt in Seville on Wednesday night.

So his family, from Stranraer, decided to surprise him with a last-minute trip and tickets for the game.

Robert’s son, also called Robert Bruce, 40, had the idea to conceal the tickets within a Rangers football shirt – meaning his dad did not spot them at first.

Footage of the heartwarming moment shows retiree Robert Sr noticing a birthday card tucked inside which had tickets on the back.

The grandad-of-four then can be seen giggling before dropping his head and banging his fist on the table in excitement and shock.

Robert Sr shouted “I can’t believe it”, before laughing and wiping his eyes as he gets a little emotional at the surprise.

Forklift driver Robert Jr said: “Dad has supported Rangers all his life, and he turns 70 next month so we wanted to surprise him.

“He doesn’t like being the centre of attention because he’s a little old fashioned, but he was totally speechless and quite emotional.

“We could all see his face change as he realised what he had in his hands.

“When he realised, he was overwhelmed and on cloud nine.”

This is the Rangers’ first European final since 2008, when they were defeated by Zenit St Petersburg.