‘Racist and sectarian’ singing at Orange marches condemned by police

Arrests made as chief superintendent says some attendees were intent on 'causing offence and stirring up hatred'. 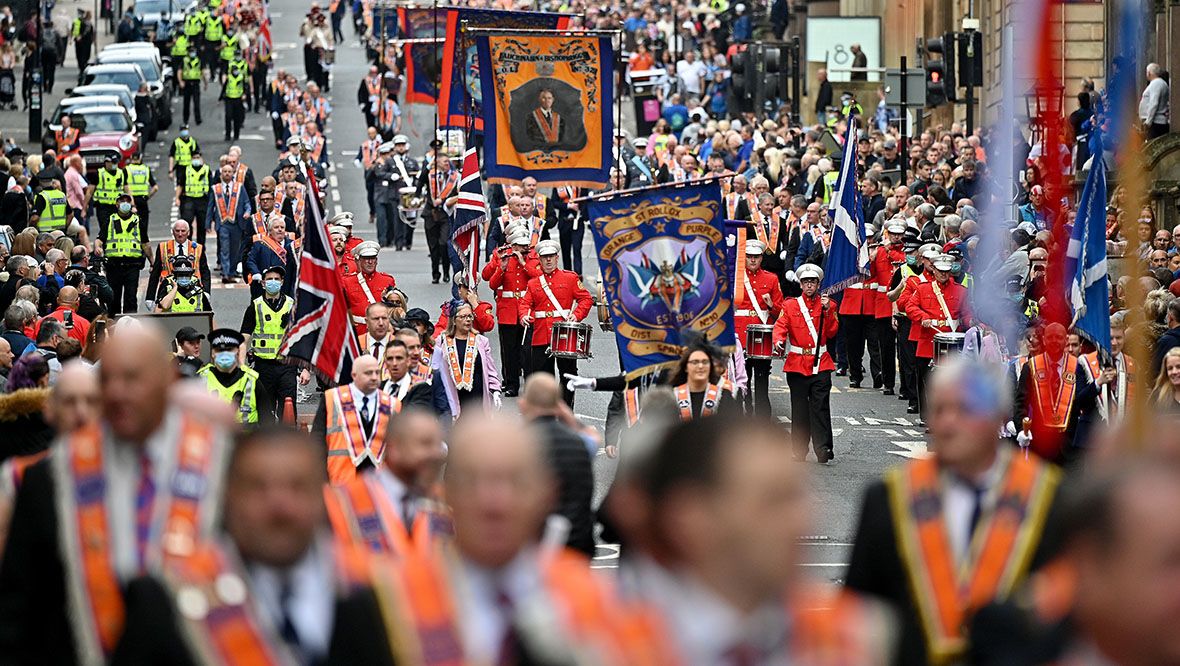 Outbreaks of “racist and sectarian singing” by people attending Orange Order processions through Glasgow have been condemned by police.

Officers say they made several arrests as thousands of people marched in the city on Saturday.

Crowds lined the city centre, including on George Street and West George Street, and there was a large police presence at Glasgow Green where members of the parades gathered in the afternoon.

This year marks the 200th anniversary of Orange parades in the city and follows the cancellation of the biggest annual event – commemorating the Battle of the Boyne – the past two years as a result of the coronavirus pandemic.

Chief superintendent Mark Sutherland, divisional commander for Greater Glasgow, said some people in attendance were intent on “causing offence and stirring up hatred by singing unacceptable sectarian and racist songs”.

He said: “We are aware that on a number of occasions today there have been outbreaks of racist and sectarian singing by some of those attending to support the Orange Order processions, this is utterly unacceptable and we completely condemn this behaviour.

“Where possible, we are seeking to take action against those intent on causing harm and dividing our communities, we have already made arrests in connection with various offences and will continue to do so where required. With large crowds gathering today, our main priority has been public safety and to ensure minimum disruption to the wider public.

“Once again, we see a number of people intent in causing offence and stirring up hatred by singing unacceptable sectarian and racist songs, I want to again condemn this behaviour in the strongest possible terms.

“It is clear that sectarianism remains a serious, ongoing problem in Scotland and whilst policing has an important role in tackling this type of behaviour, this is a collective problem and needs to be addressed in a collective, collaborative manner.”

Earlier this week, Glasgow’s police chief warned the force will not tolerate “offensive behaviour, including hate crimes, drunkenness and disorder” and urged the “large majority” who behave in the “right way” to influence those around them.

Jim McHarg, Grand Master of the Grand Orange Lodge of Scotland, told STV News: “As per normal, our members behave in the right manner and always have done and always will do.

“Everyone in the parade shows respect to every part of the community and all we ask for is the people who come along to support understand that, and indeed the people who object to our existence – that they respect us.”

But the Church of Scotland took to Twitter as the marches took place to condemn anti-Catholic bigotry.

It said: “The Church of Scotland opposes anti-Catholic bigotry and sectarianism. We have a very close working relationship with the Roman Catholic Church.

“Over the years we have worked together to tackle sectarianism and support one another.

“We speak to leaders in the Roman Catholic Church every week and greatly appreciate the friendship that exists between our churches and our communities.”

Up to 800 police officers were deployed to manage Saturday’s event, which saw marches proceed through the city centre and past Catholic churches.

Members of Call It Out, a campaign group that opposes anti-Irish and anti-Catholic bigotry, were spotted holding “peaceful vigils” outside churches on the routes.

A spokeswoman for the group said: “We are calling on all Glasgow citizens, trade unionists, anti-racists, equality campaigners and those opposed to egregious manifestations of anti-Catholic hatred to join us in peaceful protest in response to the imposition of these marches by anti-Catholic organisations.”