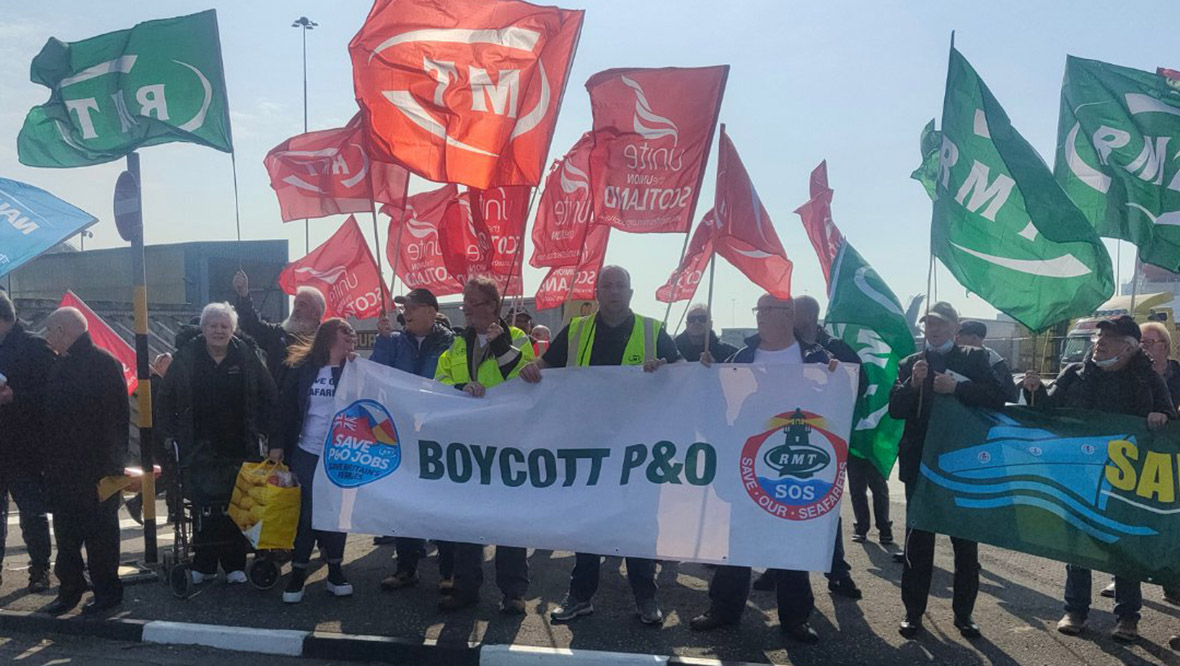 Prime Minister Boris Johnson said it appeared to him that P&O Ferries had “broken the law”, the UK Government would be “taking action” and was encouraging workers to do the same.

It comes as unions assembled supporters in protest at Cairnryan where the ferry operator ran its Scotland to Northern Ireland service.

Addressing MPs in the Commons, Johnson condemned the “callous behaviour” of P&O and said it “is no way to treat hardworking employees” after the firm sacked 800 workers and suspended all of its services.

The ferry operator, which was bought by Dubai-based logistics giant DP World in 2019, has also come under fire for replacing sacked staff with cheaper agency workers.

Johnson said: “We will not sit by because under section 194 of the Trades Union and Labour Relations Act of 1992 it looks to me as though the company concerned has broken the law, and we will be taking action, therefore, and we will be encouraging workers themselves to take action under the 1996 Employment Rights Act.

“Both acts passed by Conservative governments and if the company is found guilty then they face fines running into millions of pounds, and in addition we will be taking steps to protect all mariners who are working in UK waters and ensure that they are all paid the living wage.”

P&O, which operates services between Cairnryan and Larne, in Northern Ireland, said the business was no longer “viable” and that, without major changes, it would fold.

Peter Hebblethwaite, P&O’s chief executive, said on Wednesday he understood the “anger and shock” about the loss of jobs, which were announced on a video call last Thursday without any prior warning.

He said: “I want to say sorry to the people affected and their families for the impact it’s had on them, and also to the 2200 people who still work for P&O and will have been asked a lot of difficult questions about this.

“Over the last week, I’ve been speaking face-to-face to seafarers and their partners. They’ve lost their jobs and there is anger and shock and I completely understand.

“We needed fundamental change to make us viable. This was an incredibly difficult decision that we wrestled with but once we knew it was the only way to save the business, we had to act.

“All other routes led to the closure of P&O Ferries. I wish there was another way and I’m sorry.”

The trade union RMT has organised a series of demonstrations at ports across the UK, including Cairnryan, Liverpool, Hull and Dover.

RMT general secretary Mick Lynch said: “The British public is outraged by this injustice and understand that if these workers are not fully reinstated, the same thing could happen to them in their workplaces.

“Boris Johnson must act in the national interest, introduce emergency legislation to take over the running of P&O, reinstate our people and send a message to other gangster capitalists you are not welcome in this country.”