Protesters blockaded an enforcement van and chanted, 'these are our neighbours, let them go,' as police were called to the scene. 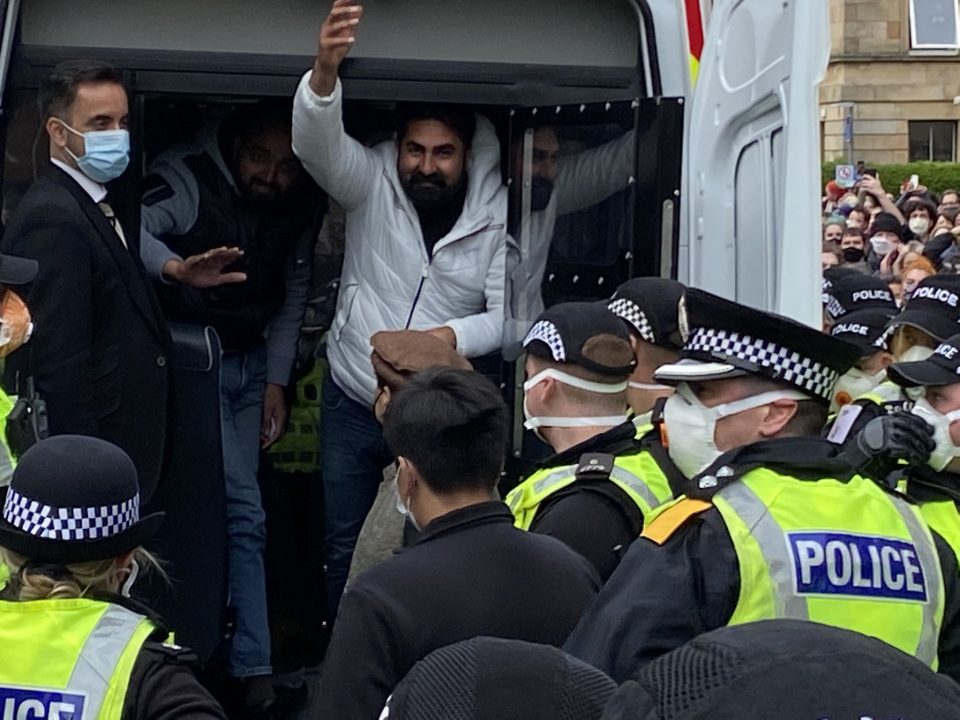 Police have released men detained by Home Office officials during a raid in Glasgow after protesters surrounded their van and prevented it from leaving.

Large crowds gathered on Kenmure Street in Pollokshields on Thursday morning after UK Border Agency officials moved on a property.

Hundreds of protesters blockaded a Border Force enforcement van and chanted, “these are our neighbours, let them go”, as police were called to the scene.

Two men, aged 31 and 32, and a 23-year-old woman were arrested during the police operation.

In a statement, Police Scotland appealed to members of the public to disperse so that the men can be released.

The statement read: “In order to protect the safety, public health and well-being of all people involved in the detention and subsequent protest in Kenmure Street, Pollokshields, today, Chief Superintendent Mark Sutherland, has, following a suitable risk assessment, taken the operational decision to release the men detained by UK Immigration Enforcement back into their community meantime.

“In order to facilitate this quickly and effectively, Police Scotland is asking members of the public to disperse from the street as soon as possible.

“Please take care when leaving the area and follow the directions of the officers on the street.”

SNP MSP Humza Yousaf tweeted: “While immigration is reserved matter I am pleased @policescotland have legitimately intervened, in interests of public health & safety, & those in Border Force custody will be released Situation should never have occurred.

“The UK Govt’s Hostile Environment is not welcome here.”

First Minister Nicola Sturgeon, who is the MSP for Glasgow Southside, tweeted: “Today’s events were entirely down to @ukhomeoffice actions.

“@policescotland were in an invidious position – they do not assist in the removal of asylum seekers but do have a duty to protect public safety. They act independently of ministers, but I support this decision.”

She added: “I disagree fundamentally with @ukhomeoffice immigration policy but even putting that aside, this action was unacceptable.

“To act in this way, in the heart of a Muslim community as they celebrated Eid, and in an area experiencing a Covid outbreak was a health & safety risk.”

One of the men, Lakhvir Singh, 34, from India, spoke to the PA news agency through a translator.

He said: “I’ve been astonished and overwhelmed by the support I’ve received from the people of Glasgow. At around 9.30am immigration enforcement carried out a raid and we were taken to security in the van.

“There were only five or six people at the time but word spread and then there were crowds of hundreds. We are so grateful for the support.”

Aamer Anwar, the men’s legal representative, added: “They’re elated, they’re astonished and they’re deeply grateful to the people of Glasgow for having turned up today when they were dragged out of their beds this morning.

“They thought they were going to be taken to a detention centre, they dreaded the treatment they would receive and what would happen to them.

“At the end of the day, we’re grateful to Police Scotland who saw sense in the fact that, for public safety, that these individuals should be released because the people of Glasgow said ‘we’re not moving, these are our neighbours – release them’.

“It sets a benchmark quite high for the rest of the country to follow and say that this is the way that we should treat people in society.”

A Home Office spokeswoman said: “The UK Government is tackling illegal immigration and the harm it causes, often to the most vulnerable people by removing those with no right to be in the UK.”

“The UK Government continues to tackle illegal migration in all its forms and our New Plan for Immigration will speed up the removal of those who have entered the UK illegally.”