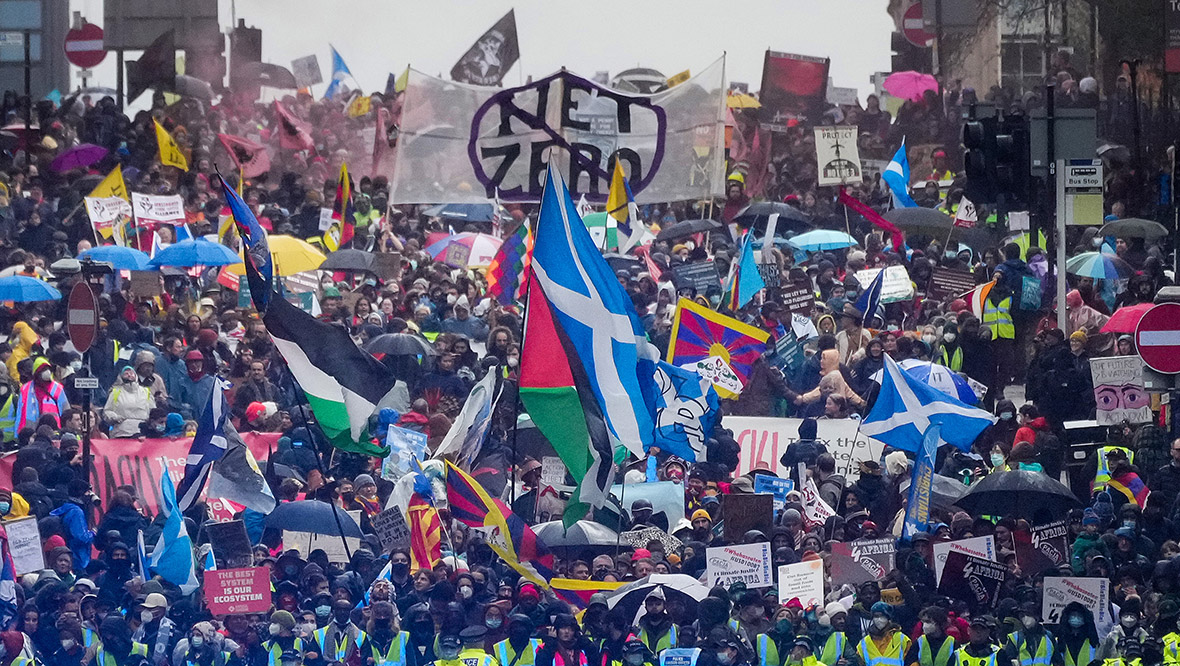 Police arrested 22 people during a day of climate protests in Glasgow, with demonstrators held back and protesters forcibly removed from a city centre bridge.

Tens of thousands of protesters marched through the streets of Glasgow to demand action to tackle the climate emergency as the city hosts the COP26 summit.

Crowds walked from Kelvingrove Park to Glasgow Green, with organisers estimating that more than 100,000 people took park in the march.

Police officers arrested 21 activists from the Scientist Rebellion movement who had chained themselves to the King George V Bridge, and were seen to block in other protesters in the city centre.

A further arrest was made following the end of the march but assistant chief constable Gary Ritchie claimed the day had “passed largely without incident”.

Ritchie said: “Glasgow has today hosted a public protest the size and scale of which was beyond anything many of us – both within and outwith policing – can ever remember.

“As one of the key events of COP26, the Climate March this afternoon brought together thousands of people from across Scotland, the UK and the world.

“Months of planning has gone into the policing operation for the procession and through regular discussion with organisers and key campaign groups, we clearly set our expectations for the behaviour of participants.”

He added: “The procession has been generally good natured, with participants in high spirits, keen to draw attention to their respective causes with Police Scotland officers deployed alongside mutual aid officers from across the UK.

“As we’ve made clear throughout, our aim has been to deliver a safe and secure conference, and ensure people’s right to protest – and counter protest – and having their voices heard is upheld through the facilitation of peaceful, lawful protest.

“However, we’ve also been steadfast in our commitment that we will not tolerate damage to property, violence or disorder.

“A group of people was contained by officers after their conduct deteriorated, pyrotechnic devices were used and they brought the procession to a halt.

“The containment remained in place for a short time before being lifted as the march came to a conclusion. One person was arrested following the end of the march.

“In a separate incident this morning, our Police Liaison Team and Protest Removal Team attended to ensure the safe removal of people involved in a lock-on at the King George V Bridge at the Broomielaw in Glasgow.

“As a result, 21 people were arrested and have been released on an undertaking.

“I want to thank the vast majority of those who attended both the Youth March and the Climate March for their positive attitudes and for following instructions from our officers.”

Police refused to estimate how many people were marching, but organisers the COP26 Coalition claimed more than 100,000 people had turned out despite the weather, as an estimated 300 events were taking place worldwide.

Asad Rehman, spokesman for the COP26 Coalition, said: “Many thousands of people took to the streets today on every continent demanding that governments move from climate inaction to climate justice.

The latest demonstrations come midway through the COP26 summit, which has seen world leaders gather to set out the action they are taking – including commitments to curb deforestation, phase out coal, end funding for fossil fuels abroad and cut methane emissions.

But there is still a significant gap between the measures countries have committed to and what is needed to avoid more than 1.5C of warming, beyond which the worst floods, droughts, storms and rising seas of climate change will be felt.

Countries are under pressure to agree a process to increase ambition in the next decade, as well as deliver finance for developing countries to cope with the crisis and finalise the last parts of how the global Paris Agreement on climate change will work.