The move comes after more than 400 people with alcohol were refused entry to the beauty spot last weekend. 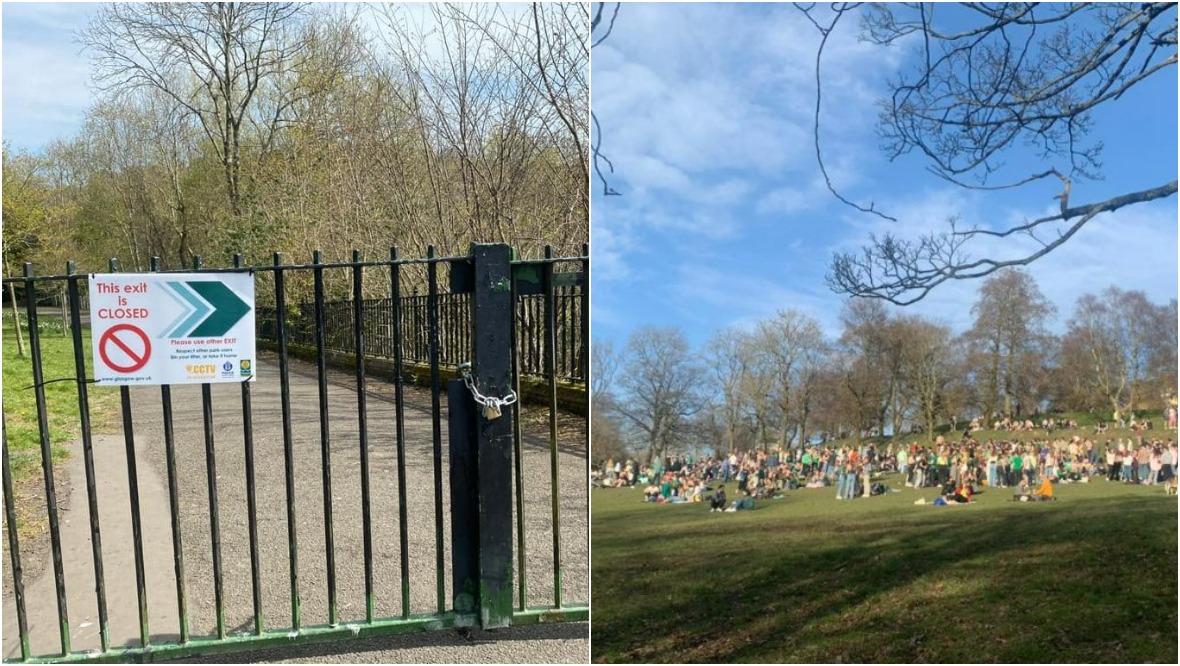 Gates to Glasgow’s Kelvingrove Park have been locked as part of a crackdown on drinking alcohol in public.

It comes after more than 400 people with alcohol were refused entry to the beauty spot last weekend.

Nine of the park’s 16 gates will be shut on Friday and Saturday.

Officers from the council’s community enforcement team and Police Scotland knocked back 413 groups or individuals trying to enter with alcohol last week.

Many others were also ejected from the park for consuming alcohol, in violation of a city by-law, and some young people aged between 14 and 17 were so intoxicated they had to be taken home by police.

Officers had to clear the busiest areas of the park twice due to concerns over a lack of social distancing among people who had gathered in large numbers.

Stephen Egan, the council’s head of parks and street scene, said: “Kelvingrove Park remains a stunning open space but we cannot tolerate the anti-social behaviour that is being experienced in the park.

“So much of that behaviour is being fuelled by alcohol and we have to take steps to protect the park for everyone who wants to visit.

“Sadly, it is young people who are invariably involved in the disorder and we are increasingly concerned that many are actually putting themselves in harm’s way.

“We are very clear that alcohol is not welcome in Kelvingrove Park and we are urging parents and guardians to help us convey that message to their children.”

Warm weather is expected to continue this weekend and many people are again expected to head to Kelvingrove.

The local authority and Police Scotland have been working on a plan to manage access to the park through a limited number of open gates this Friday and Saturday – closing nine of the 16 entry points.

“Officers will be visible and accessible to park users should they need police assistance.

“We have received reports of children and young people getting into vulnerable situations and I would like to appeal to parents and guardians to make sure they know their children’s whereabouts.

“One person has already been arrested, charged and is due to appear at court following an assault on a 19-year-old.

“We would like to remind anyone planning on visiting the park that alcohol is not permitted and should incidents of anti-social behaviour take place, then those responsible will be dealt with robustly.”

Meanwhile, there will also be additional patrols by park rangers and environment enforcement officers in Edinburgh over the weekend.

Police had to disperse crowds at the popular park in the capital earlier this month, while a video surfaced of a mass brawl between young people.

One officer suffered a facial injury while trying to enforce coronavirus laws as people gathered to enjoy the sun over the Easter weekend.

Edinburgh City Council leader Adam McVey said: “We’ve been working closely with colleagues in Police Scotland to address the issues and put in place an action plan that will drive home the message that this anti-social behaviour will not be tolerated.”

Chief superintendent Sean Scott of Edinburgh Police Division said: “Following recent issues with disorder in some areas of Edinburgh, particularly the Meadows, we are continuing our extra high visibility patrols this weekend.

“The vast majority of people enjoy our beautiful green spaces responsibly and I welcome their continued support, but the small minority who intend spoiling it for others will be targeted and dealt with effectively.

“Anti-social behaviour will not be tolerated and we will continue to work closely with the council and other key partners in preventing and tackling these issues, both in the immediate future and long-term.”