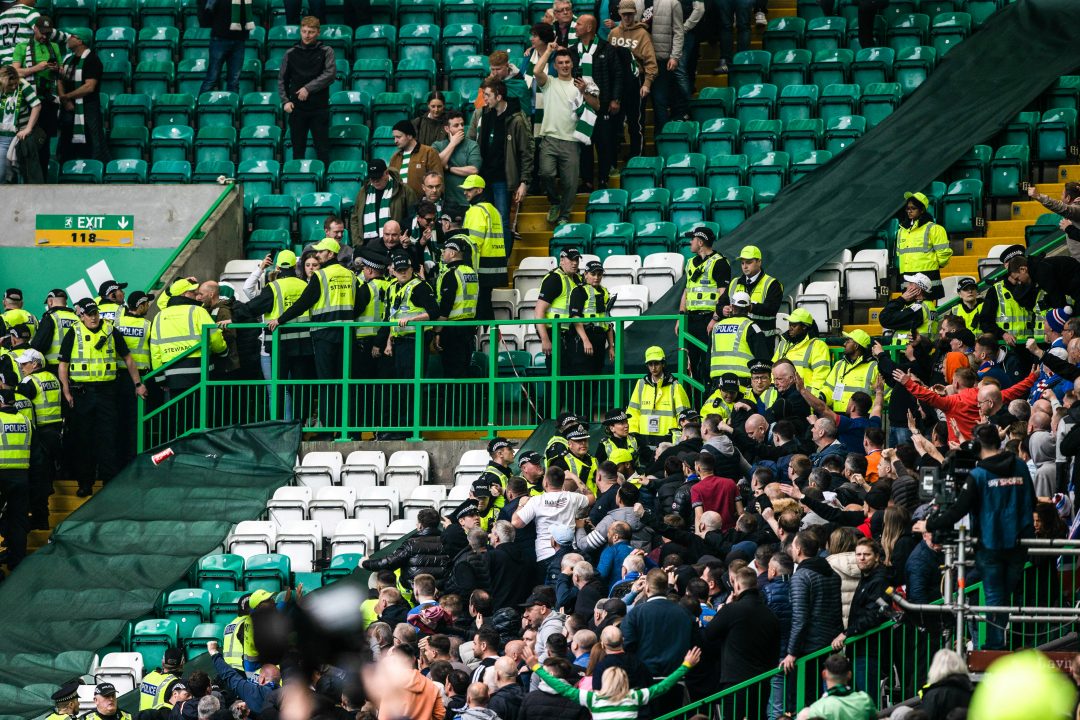 Police are expecting to make further arrests following disorder at the Old Firm match on Sunday.

Eight people were arrested after a number of missiles were reportedly thrown by both sets of supporters during the match at Celtic Park.

Police Scotland assistant chief constable Mark Williams told STV News that he was not aware of any injuries sustained as a result of the clashes.

However, he said that the fact there were no injuries was only as a result of “good luck”.

He insisted that those responsible for throwing missiles at opposition fans will be brought to justice.

“The vast majority of fans enjoyed the game at the weekend,” Williams told STV News.

“Tens of thousands of people went there, enjoyed the football and went home safely.

“And that of course is always the overarching goal of any event of that scale and nature that people are safe and get home in one piece.

“A very small minority however clearly engaged in disorder and anti-social behaviour and missile throwing, and that’s completely unacceptable.

“And it’s something that Police Scotland will work very hard to follow up, to investigate and to bring those responsible to justice.”

Williams said that he “sadly” expects an increase in the number of arrests made following the match.

He said: “There’s clearly a number of, as I say, a very small minority of individuals who engaged in aggressive and violent behaviour.

“And it’s our intention to pursue them and to arrest them and bring them to justice.

“So I would hope that number would increase, sadly.”

And Williams described the scenes witnessed following the match as “disgraceful” as he said that police will take evidence from CCTV, as well as eyewitnesses and the clubs.

“I think it’s very disappointing for everyone involved with football – for the genuine fans, for the clubs, the authorities, the police service, for the public of Scotland,” he said.

“It’s our national game and scenes like that are disgraceful and they’ve no place in football.

“And it’s very important that the football authorities, the football clubs, the fans groups, the agencies involved including the police, work together to do everything we can to prevent it happening.

“And those individuals, on this occasion a very small minority, will be pursued and we’ll do everything we can to take into account evidence from CCTV and from eyewitnesses, and from the clubs, and we’ll follow that up and pursue those responsible.”

Williams added that police aim to prevent such behaviour from taking place.

He said: “There’s no doubt that the football clubs and the football authorities have to take the lead in addressing this sort of behaviour.

“It’s certainly not for the police service to do that.

“We want to prevent this behaviour in the first place and that is best led through the collective efforts of the football authorities and clubs, and through the fans themselves.”