Period poverty legislation set to be passed by MSPs

The landmark bill, which offers universal access to sanitary products, would be a world-first. 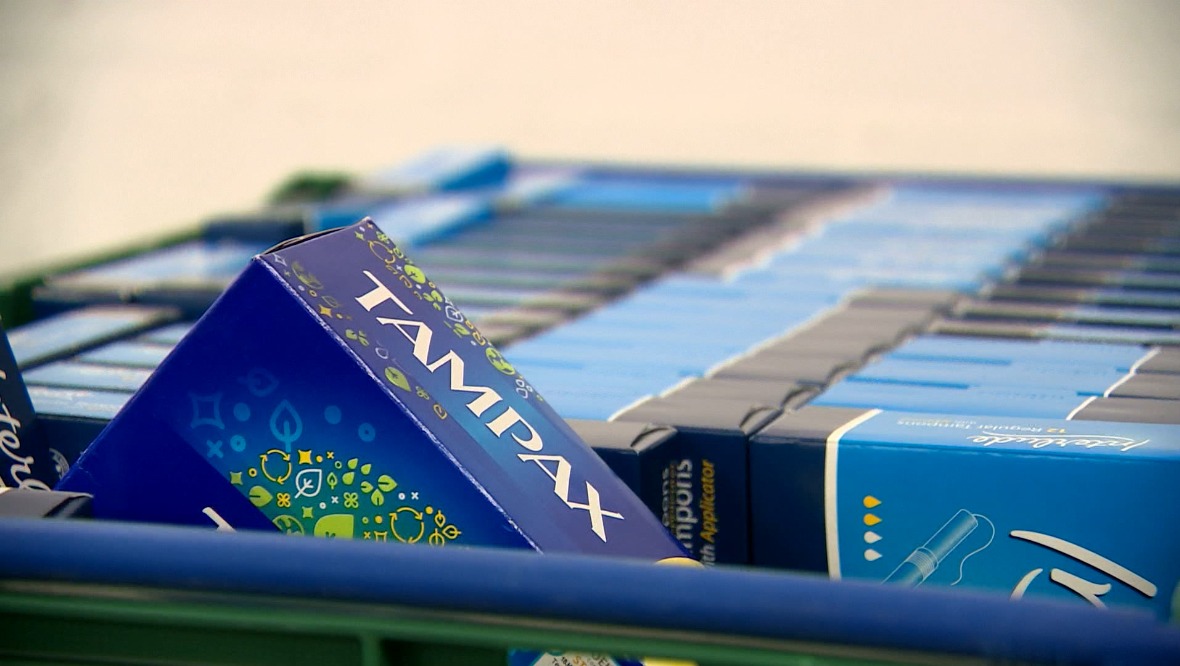 In what will be a world first, legislation granting universal access to sanitary products is set to be passed in Scotland later today.

MSPs are due to vote on the landmark bill, following a three-year campaign to bring it into law.

It’s hoped the new measures will go some way towards tackling period poverty, as well as addressing the stigma and taboo which has traditionally surrounded menstruation.

Kerry Wright from Aberdeen has first-hand experience of having to go without.

“I was raised in a household where there was very little income, and what income there was, it wasn’t prioritised to the children,” she said.

“Often when my period did appear I was using socks, toilet roll, whatever I could get a hold of, just to help with the flow of bleeding.

“I would miss school because I didn’t want to go out if I didn’t have materials to use. It was quite a shameful experience. It was embarrassing.”

Three years ago the CFINE food bank in the city where Kerry now works was involved in a Scottish Government pilot project, handing out tampons and sanitary pads to girls and women from income families.

Following its success, legislation expected to be passed in parliament will create a universal scheme, making such products freely available to anyone who needs them.

The move is being welcomed by schoolgirls at St Paul’s High School in Glasgow.

They’ve made it their mission to educate fellow pupils on menstruation.

“We speak to the younger girls in school to let them know we have products in the school and to spread awareness on what period equity is,” said Caitlin Grimley

“We don’t have to treat it as a luxury item anymore, and society can hopefully get on the path of making sure that it’s a need and not a want,” added Aimee Chadha.

“It happens, it’s completely normal and it’s not something that people should be scared to talk about and it’s something that needs to be talked more about because half the population go through it,” said Erin McGunnigle.

‘If the Scottish Parliament passes this bill we will be the first country in the world to have legislation that provides products of this nature to everyone who needs them so it really is a game changer.’

Sanitary products are currently free at schools, colleges and universities across Scotland.

But today’s bill places a legal duty on ministers to ensure anyone can access them at many different locations.

Healthcare workers are also among those supporting it, like consultant Rosie Baruah.

“Given that so many of NHS employees are female and given the nature of the shifts that we work, I think it is something that health boards should feel is an obligation to their employees,” she said.

“They need to make sure that they’re not put in the position where on top of everything else we deal with we’re also having to worry about bleeding through our clothes in the middle of a busy shift.”

The bill was put forward by MSP Monica Lennon, who believes Scotland is leading the way in tackling period poverty.

“If the Scottish Parliament passes this bill we will be the first country in the world to have legislation that provides products of this nature to everyone who needs them so it really is a game changer, who believes Scotland is leading the way in tackling period poverty.

“I think it’s really significant. This is the first legislation of its kind. If the Scottish Parliament passes this bill we will be the first country in the world to have legislation that provides products of this nature to everyone who needs them so it really is a game changer in that respect,” she said.

“As well as access to period products, there’s been a wider conversation about menstrual wellbeing and the importance of having early education for both boys and girls, and to make sure that products are there for everyone who needs them including trans and non binary people too, so I think this does break down many barriers.”

Kerry says if the bill is passed, it will ensure her own daughter doesn’t have the same experience she did.

“I get very emotional about it, because it was such a big issue for me as a teenage girl,” she said.

“My little girl will now grow up in a world or in a country where sanitary products are given as standard. They’re free, accessible and she can access them wherever she needs to or needs them.

“The fact that we now have sanitary products that will be available free of charge and accessible in multiple different places is wonderful.”

How to deal with rubbish and recycling amid Edinburgh bin strikes

Crematorium raises £12,000 by recycling hips and jewellery from bodies

Schoolgirl given role in Batgirl 'heartbroken' after movie shelved

Deliberate fire at nursery school caused £23,000 worth of damage