Baby Peyton, who is now back home, is Scotland's youngest ever coronavirus patient. 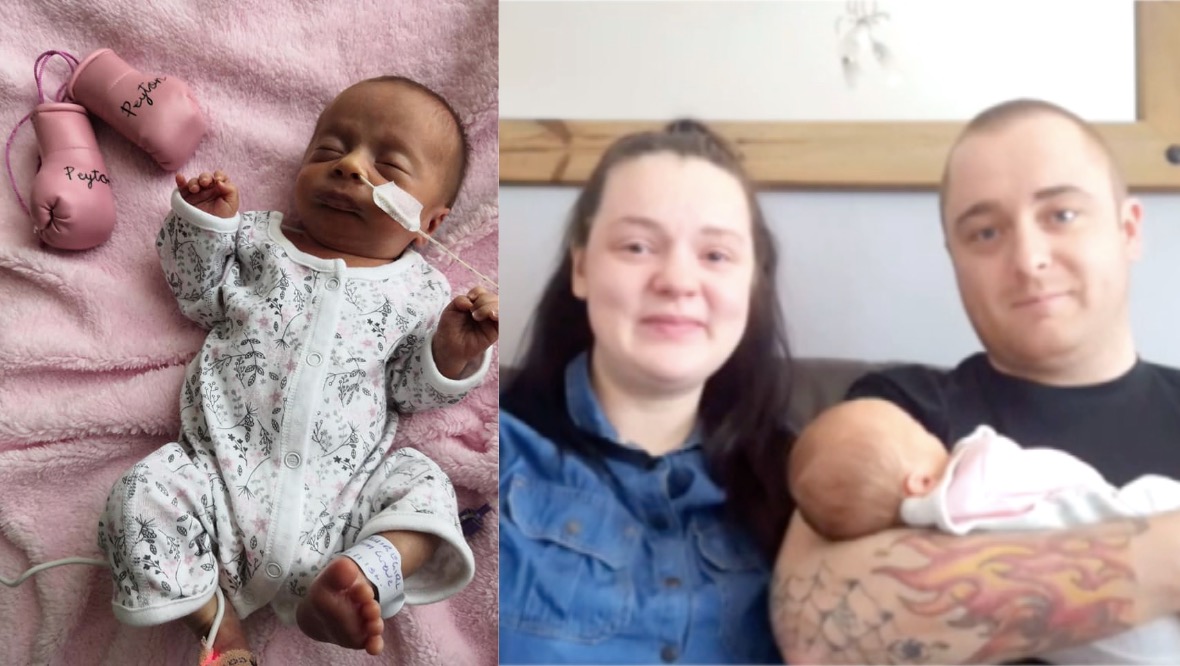 The parents of a premature baby have described NHS workers as “the real heroes of the world” after hospital staff helped the newborn fight off Covid-19.

Four-week-old Peyton, who is now back home with her family, is Scotland’s youngest ever coronavirus patient.

She was treated at the University Hospital Wishaw after contracting the virus just days following her birth.

‘They are the real soldiers, they always have been. People are just realising it.’

One week on from bringing their daughter home, parents Tracey and AJ Maguire, from Bellshill, said they cannot thank NHS staff enough for what they did to save little Peyton.

In an interview on Lorraine, Mr Maguire said: “They are the real soldiers, they always have been. People are just realising it.

“As cute as she (Peyton) is, they had to go in there and risk their lives, they’re then going home to their families and risking their lives too.”

He added: “I can’t thank paramedics, nurses, doctors, porters, everybody in a hospital working capacity, they are the real heroes of the world.

“There’s nothing, no money that can ever repay them what they’ve done.

‘If it wasn’t for them my wife or my daughter wouldn’t be here just now.’

“If it wasn’t for them my wife or my daughter wouldn’t be here just now.”

STV News told previously how Peyton, who was born eight weeks premature on March 26, was delivered by c-section after Mrs Maguire was diagnosed with pre-eclampsia.

Days later, as the tot was being cared for in an incubator, the couple were told their 3lbs 11oz baby had tested positive for Covid-19.

The parents were forced to spend weeks away from their newborn while NHS workers worked hard to save her life.

Mrs Maguire was separated from Peyton for 15 days but was then allowed into stay in the hospital for five days to self-isolate with her baby with the care from staff.

During an emotional video call, Lorraine surprised the couple with recorded supportive messages from the workers who cared for mum and baby at University Hospital Wishaw.

One said: “It’s lovely to know you’re home and well and it was an absolute pleasure looking after you.

“Can’t wait to meet baby Peyton when everything is all well and good again.”

Another added: “ We’re all thinking of you.

‘Our NHS system is there and they know what they are doing – put your trust in them.’

“These are difficult and challenging times and I want you to treasure each moment that you have with Peyton and just remain positive.”

“Our NHS system is there and they know what they’re doing.

“Put your trust in them.”