Nurse reunites with family from US as quarantine rules change

Elaine Burt shared an embrace with her sister and her nephews as they arrived at Glasgow Airport. 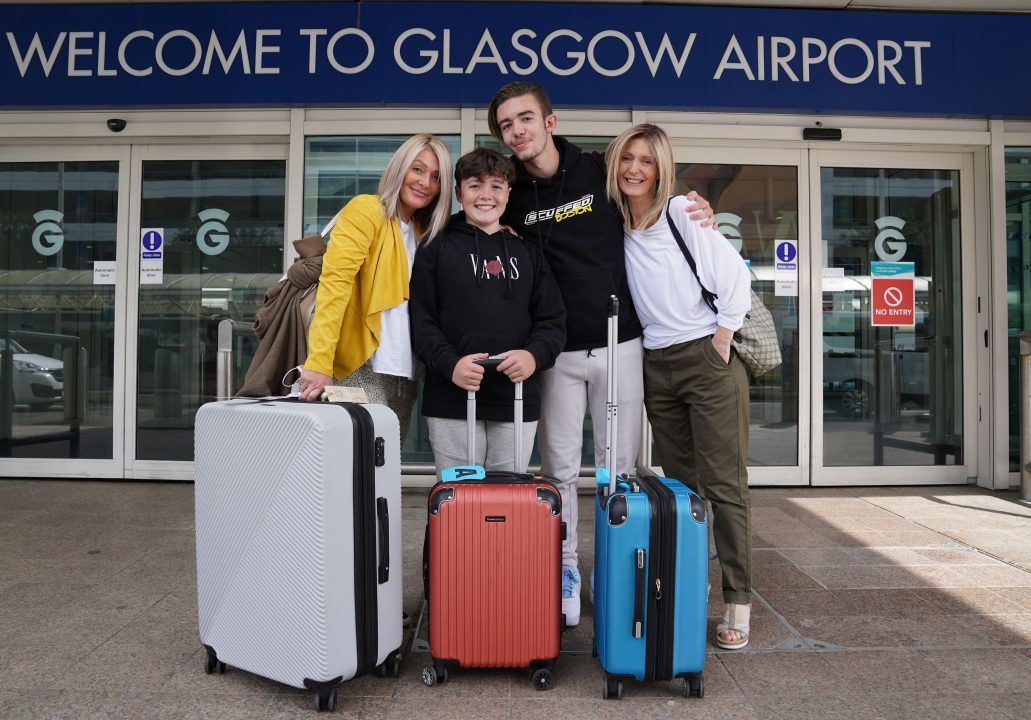 A nurse who embraced her family at an airport after 20 months apart has hailed the “best present ever” after rule changes mean they will not have to quarantine for ten days.

Elaine Burt, 55, a senior nurse with the NHS, shared an emotional embrace with her sister Michelle Bolger, 50, and her nephews Kaie, 17, and Taran, 12, who were all double vaccinated in the US, as they arrived at Glasgow Airport on Monday morning from Boston via Amsterdam.

Mrs Bolger said: “It’s been so long … it’s been really hard, but we’re here, we made it”, as she arrived in the country to visit her mother Jean, who has been unwell.

She said: “We booked the flight just a week past Monday. It’s been a rollercoaster trying to get here.

“We still have to test on day two but it’s great, absolutely amazing, I didn’t think I would see this day.

“We’ve done everything by the book just to get here and we’re just excited.”

Ms Burt, from Newton Mearns, said after the reunion: “It was an absolute relief, it just felt as if it was never going to happen and it’s just the best present ever.

“We never thought it was going to happen with all of the different restrictions, but we left it to the last minute to see what was possible.”

‘It was an absolute relief, it just felt as if it was never going to happen and it’s just the best present ever.’

They were among the first to enjoy a relaxation of rules that changed as of 4am on Monday, allowing people who have had both jabs in the US and EU to travel to Scotland without isolating for 10 days.

Subject to countries remaining on the amber travel list, travellers will no longer have to self-isolate for 10 days on arrival in Scotland.

The change does not apply to people who have been in France in the 10 days prior to their arrival, due to concerns over the Beta variant of coronavirus.

Travellers need to show a negative test before departure and produce a negative PCR test result on day two after arrival.

Glasgow University veterinary medicine student Ben Hamilton, 19, from Texas, said it was a “relief” to not have to isolate after he landed back in Scotland, saying: “It’s the first time I’ve got back and not had to quarantine.

“It’s a relief not to have to sit inside myself for 10 days.”

Colin Morton, 56, was another person enjoying isolation-free travel at the airport on Monday morning.

The engineer, who moved to Italy in his mid-20s and had both his vaccinations in Italy, said he had returned to Scotland to visit his mother, who has been unwell.

He said: “My mother and father live here and they are both elderly and my mother has been unwell, so I’m looking forward to being able to see her.

“There would have been no point coming if I had to quarantine.”

The requirement to take a further PCR test on day eight is being dropped, authorities said.

Those arriving will be required to show either the EU Digital Covid Certificate or the US Centres for Disease Control and Prevention’s white card – known as a CDC card – to prove they are fully vaccinated.

Announcing the changes last week, Scottish Transport Secretary Michael Matheson said the change is down to the “overwhelming success” of the vaccination scheme in Scotland, as well as “successful rollouts” of vaccine programmes in the EU and US.

He said: “Fully vaccinated travellers will be able to travel to Scotland under this significant relaxation of international travel measures, providing a boost for the tourism sector and wider economy while ensuring public health is protected.”

He urged people to “continue to think very carefully about travelling – especially given the prevalence and unpredictable nature of variants of concern”.

The relaxation of the rules extends to the four European Free Trade Association members – Norway, Iceland, Switzerland and Liechtenstein – and the microstates of Monaco, Andorra and Vatican City.