Ritchies Training in Glasgow is extremely busy, with the UK estimated to be short of more than 100,000 lorry drivers. 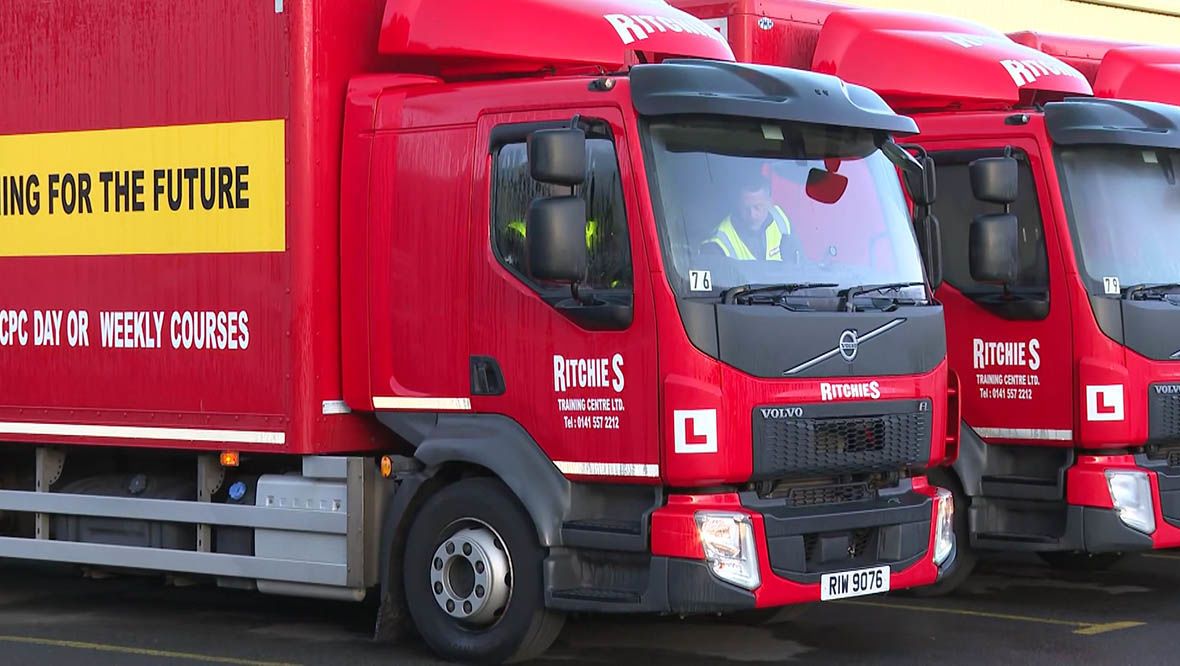 One of the country’s biggest HGV training centres in Glasgow is working hard to get more qualified lorry drivers on the roads in a bid to help companies suffering supply chain issues.

Ritchies Training, in the north of the city, say they are extremely busy at the moment, with people booked in for lessons on how to drive lorries, buses and forklifts.

But getting an HGV licence can be a lengthy process – and time is of the essence as the UK is estimated to be short of more than 100,000 lorry drivers, according to a Road Haulage Association survey of its members.

The UK Government has announced a temporary visa scheme that will see 5000 foreign HGV drivers and 5500 poultry workers allowed into the UK on three-month contracts up to Christmas Eve in an attempt to keep supermarket shelves stocked with turkeys and tackle fuel delivery difficulties.

But workers at Ritchie’s say there is no quick fix to resolving the situation, partly due to long waiting times for people looking to sit their theory test.

And Brian Meechan, an instructor at Ritchie’s since 2004, told STV News the hard work only begins once people have actually passed their test.

He said: There’s a lot involved, it’s not as easy as jumping in a truck and going – they’ve got to know exactly where they’re going, watch out for low bridges, weak roads, weak bridges.

“I think it’s basically the conditions, the companies are not willing to pay their drivers the money so they’re losing them, they’re going elsewhere, abroad. I mean the Polish drivers, I believe they’ve been given a big incentive to go back to their own country.”

The problem is being made even worse by a backlog in the processing of HGV driving licences.

The Driver and Vehicle Licensing Agency (DVLA) says there are 54,191 applications for vocational driving licences that still need processed.

Around 4000 provisional HGV licence applications are in that queue.

A DVLA spokesperson said: “We are prioritising HGV provisional licence applications which are currently being issued in around five days and we are looking at ways to speed up this process even further. More complex transactions, for example if medical investigations are needed as part of a driving licence application, may face longer delays.

“The majority of applications waiting are for renewals. Once a driver has submitted their application they may be able to continue to drive while we are processing it, provided they have not been told by their doctor or optician they should not drive”.

Scotland’s deputy first minister said on Wednesday shortages at filling stations in the country are “more acute” than normal, though he insisted that the situation was “improving”.

John Swinney spoke out as the UK Government put 150 military drivers on stand-by to help deliver petrol and diesel to forecourts if needed.

But David, an instructor at Ritchie’s training group for eight years, said driving lorries is a big change from the army.

“Years ago we done different things, ambulance strikes, everything else. We just did what he had to do at that time but now it’s a big, big ask, things have changed that much through the industry, like five days’ training ADR.

“These young men are trained in a big, big way – they’ll be able to do the job, they will, if asked.

“The crisis of the driving, there is a shortage but there was still a shortage six months ago, a year ago, before Covid, so what is the difference now?

“Low wages, long hours, there’s that many different things, sleeping in the cab five days a week, six days a week, away from your family, people don’t like that.

“It’s not an easy job. People think you just go in there, you drive your vehicle and that’s it – the things you’ve got to think about is your load, security, everything else. If you’ve not done your job right you’re going to get a heavy fine, you can get penalty points, there’s a lot to think about.”

UK Prime Minister Boris Johnson said on Tuesday the situation on the filling station forecourts is “stabilising” as he urged motorists to go about their business in the normal way.

Following days of chaos, with long queues for petrol and stations running dry, the Prime Minister said he understood the frustration felt by drivers as they struggled to fill up.

However, he said that the indications from the industry were that the situation was beginning to improve with supplies returning to normal levels.

Swinney said the UK Government’s decision to put military drivers on stand by to deliver fuel “may well be helpful”.

However he stated: “There are other options available. The UK Government has access to additional tanker capacity that can be used should there be driver capacity available, and we obviously are looking at what are the options there and working closely with the distribution companies in Scotland as well.”