Letter sent to the First Minister from Monica Lennon, along with more than a dozen organisations. 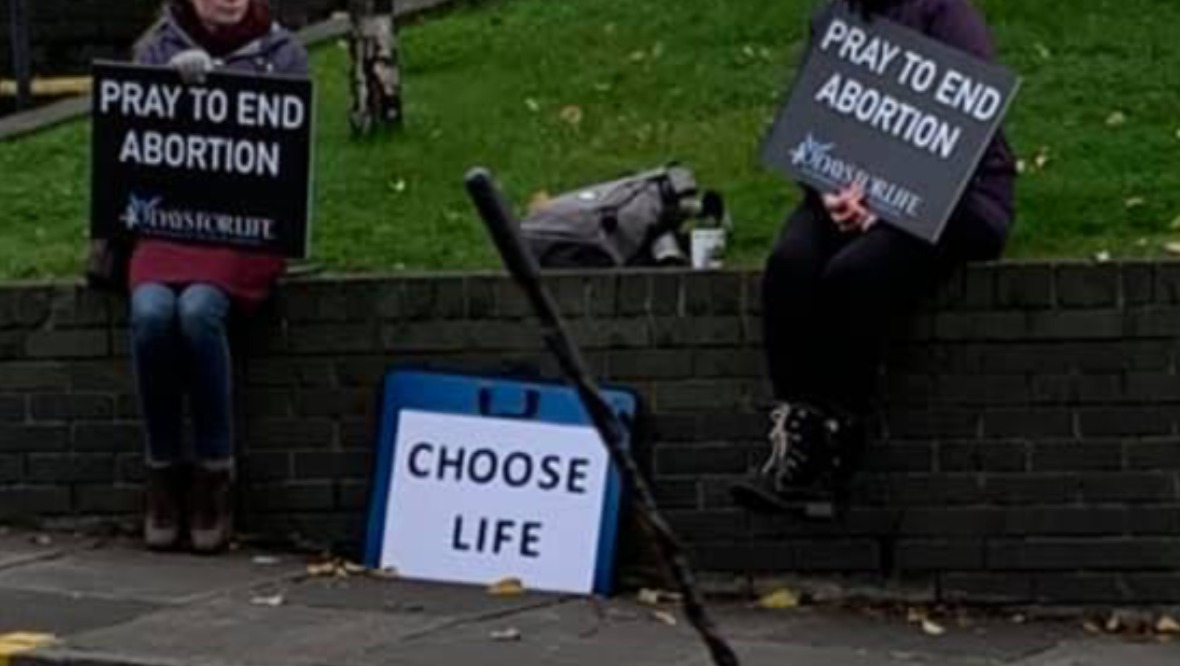 The First Minister has offered to chair an emergency summit on abortion care and buffer zones after demands were made by Scottish Labour MSP Monica Lennon and campaigners.

Lennon, along with more than a dozen organisations including Back Off Scotland, BPAS, and Rape Crisis Scotland, sent a letter to Nicola Sturgeon on Wednesday demanding an emergency summit to discuss the introduction of protest-free buffer zones outside clinics which offer abortions.

The calls came after the Scottish Labour representative challenged anti-abortion protesters who were outside of a Glasgow hospital to highlight the distress women were being caused by their presence.

In the letter, Lennon also mentioned the women’s health minister Maree Todd’s “lack of urgency” in making telemedical abortion care, in which women have a video consultation before medicine is delivered to their home, permanent.

On Thursday morning, the SNP’s health minister confirmed the procedure can continue at home “where clinically appropriate”.

At First Minister’s Questions on Thursday, Sturgeon urged demonstrators to protest outside of parliament rather than clinics and reiterated her support for buffer zones.

She said: “Women have the right to access abortion without fear or intimidation. To that end, I would say to anyone anting to protest against abortion, do it outside parliament. Doing outside hospitals or sexual health clinics targets women not lawmakers and causes stress and anxiety to those accessing healthcare and that in my view is deeply wrong.

“I strongly support buffer zones and this parliament is actively considering how it can legislate in a way that is effective and also capable of withstanding legal challenge.

“On that point, members will be aware that the law passed on buffer zones in Northern Ireland has recently been referred to the supreme court The outcome of that may have relevance for any steps we take here.

“In the meantime, we will support any local authority that is willing to use bylaws to establish buffer zones.”

She added: “I am very happy to convene and will personally chair a roundtable to discuss buffer zones and indeed any other matters that need to be addressed to ensure safe an timely access to abortion in Scotland within the current law.”

Speaking about the ongoing protests, Scottish Labour representative Lennon said: “The anti-abortion protesters targeting healthcare facilities are having a terrible impact on women, and I think it’s important that they are confronted with that reality.

“The Scottish Government’s failure to take swift action is only emboldening the protesters, and gatherings are getting bigger and more frequent.

“There is now an urgent need for the Scottish Government to set up buffer zones through national legislation, because we need harassment-free and safe access to abortion healthcare in Scotland.”

Back Off Scotland, a campaign group fighting for the right to harassment-free access to abortion services in Scotland, co-signed the letter sent by Lennon.

Following Sturgeon’s announcement, a spokesperson for the group said: “Delighted that off the back of Monica Lennon and other signatory’s effort, the First Minister has agreed to convene and chair an emergency summit on abortion rights in Scotland.”

Ahead of FMQs on Thursday, the SNP’s health secretary Humza Yousaf branded the protests a “disgrace” and urged demonstrators to gather outside the Scottish Parliament instead of “intimidating and harassing” women who are trying to access services.

He said: “I think some of those protests that we’ve seen are a disgrace, and I don’t use that word lightly.

“I don’t take away from people’s viewpoints that they might have. I know there’ll be people on various different sides of the debate in relation to abortion.

“But as the First Minister has rightly said, if you want to demonstrate against the law, come to the Scottish Parliament and demonstrate.”

Scottish Green MSP Gillian Mackay is set to introduce a Member’s Bill at Holyrood to legislate for their implementation around abortion clinics, and calls have grown for Sturgeon and women’s health minister Maree Todd to act.

Yousaf said the working group, chaired by the women’s health minister, is looking at “difficult issues” involving legal challenges in intervening with the protests.

He added that comments in defence of the demonstrations from his SNP colleague John Mason were “plain wrong”.

Mason, the MSP for Glasgow Shettleston, came under fire at the weekend for saying clinics “push abortion without laying out the pros and cons”.

He has admitted previously attending one of the demonstrations, and has said he believes abortion is “seldom essential or vital”.

The health secretary said his party colleague’s comments were “misjudged” and “ill-informed”.

Lennon has welcomed the Sturgeon’s announcement that an emergency roundtable summit will be held on safe access to abortion healthcare.

She said: “I warmly welcome the First Minister’s commitment to an emergency summit on abortion healthcare.

“Protests have been gaining momentum in recent weeks, and I think most people will have been appalled and saddened by some of the footage from outside the Sandyford Clinic in Glasgow yesterday.

“Today feels like a real turning point in the campaign to ensure women who are accessing abortion healthcare in Scotland can do so without intimidation and harassment.

“It is important that the emergency talks get underway quickly and I look forward to supporting efforts to protect safe access to abortion healthcare.”