Mum boogies through streets dressed as Christmas tree for charity

Kate Deeming has been bringing some festive cheer to the southside of Glasgow. 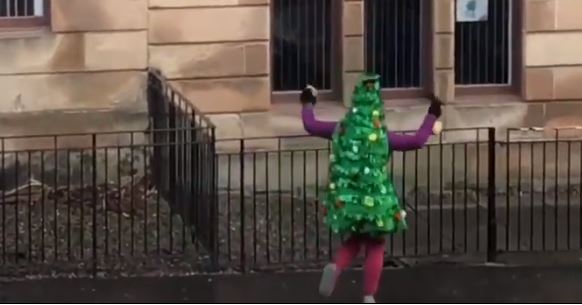 A woman has been filmed dancing through the streets of Glasgow dressed as a Christmas tree.

Kate Deeming has been bringing some festive cheer to the city’s southside as she raises money for local primary schools.

The video of the 47-year-old in Polloksheilds has since gone viral, leading to the dance artist, originally from Philadelphia, being dubbed “the dancing queen” by Nicola Sturgeon.

Kate, who has lived in Glasgow for more than 20 years, was recognised by the Scottish Parliament for her contribution to dance in 2010.

With her £5,000 target for her son’s primary school already reached, she is now raising money for other local schools.

Ms Deeming is one of a number of people raising money for her son Jasper’s school Pollokshields Primary.

She told the PA news agency: “I’m a single parent, I really rely on my son’s school.

“During this pandemic they’ve been amazing in providing emotional as well as psychological and physical and educational support, and he just loves going to school.

“I think the fact that he loves going to school is a testament to how amazing they are. So I wanted to do something for them because they’ve not had any fundraisers.”

Sharing the video the First Minister’s tweeted: “The dancing queen of Pollokshields @SunriseDances – spreading joy, and fundraising for @pollokshieldsps along the way.”

Local people have been invited to walk, run or dance a number of routes designed by Pollokshields Primary to raise money, and Ms Deeming decided she would join in by completing 50km dressed as a festive fir.

A clip of her dancing down the pavement has been viewed more than 900,000 times on Twitter, and Ms Deeming said she has seen how much people need a bit of joy while completing her challenge.

“I see when I’m out there how much people need it,” she said.

“There’s been so much focus on all this fear and all the sadness from the past year, and I get that.

“We need to find ways to bring that sense of joy back into our lives.

“We can be happy, we can be silly. Just because I’m living light, doesn’t mean I’m taking things lightly.”