More than 30 firefighters were involved in tackling the fire at St Simon’s Church in Glasgow. 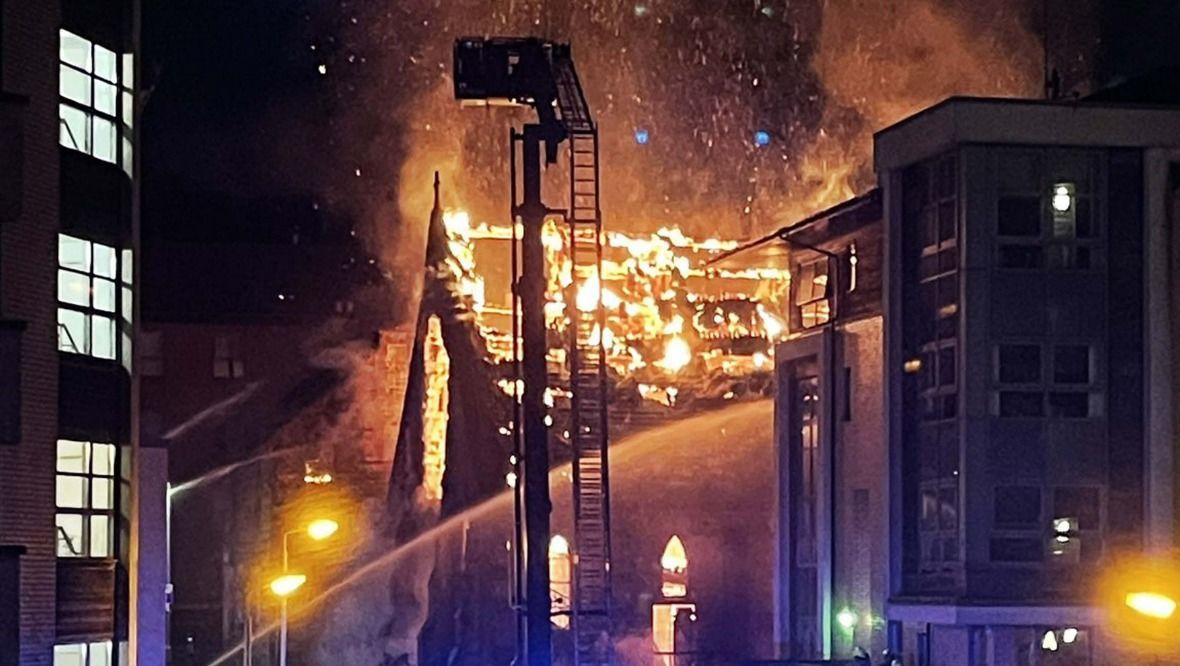 A “much-loved” church has been destroyed by a blaze that broke out in the early hours of the morning and led to the evacuation of nearby residents.

At the height of the incident more than 30 firefighters were involved in tackling the fire at St Simon’s Church in Partick Bridge Street, Glasgow.

The Scottish Fire and Rescue Service (SFRS) said one person was helped out of the property and given precautionary treatment at the scene, while residents in neighbouring properties were evacuated.

Six fire engines and two height appliances were sent to the incident when the alarm was raised at around 2.40am on Wednesday.

The Archdiocese of Glasgow described the destruction of the church as a “heavy blow” while the Sikorski Polish Club said it will be “greatly missed” by the Polish community.

The fire was extinguished by late morning on Wednesday however two fire engines remained at the scene at 2pm ensuring the building is safe.

A spokesman for the Archdiocese of Glasgow said: “The destruction of St Simon’s church by fire will be a blow to people far beyond the west end of Glasgow.

“Though small in size, St Simon’s was well-frequented and was the spiritual home of the Polish community in the west of Scotland who had established a shrine there.

“It was also a focal point for the local community, and especially the homeless who benefited from a cafe on site which had to be suspended during the pandemic.

“The church of St Simon’s is linked to the larger parish of St Peter’s in Partick and worshippers will be accommodated there.

“The cause of the blaze is not immediately apparent, but we will work with the fire service as they investigate the site.

“St Simon’s was a much-loved landmark at Partick Cross and its loss is a heavy blow.”

It was closed temporarily due to lockdown restrictions but has been operating in recent weeks with daily services, and masses for the Polish community on Sundays.

The Sikorski Polish Club said in a Facebook post: “Extremely sad news this morning. Saint Simon’s Church has been used by the Polish Community since WW2 when Polish Soldiers stationed nearby marched there every Sunday for Service.

“Today it was at the heart of our Polish Community with Polish Services every week. It will be greatly missed.”

The roof of the church has been destroyed by the blaze.

People took to social media to post photos and videos of flames leaping from the roof of the church during the night.

One person wrote: “We got woken up by walkie-talkie sounds, fiance went out and the church across the bridge has been completely destroyed in a fire within half an hour. St Simon’s was beautiful to look at.”

Chief inspector Natalie Carr said: “This remains a multiagency incident and due to the fact that the building is unsafe, at this time neither Police nor Scottish Fire and Rescue officers have been able to get in to the church to establish how the fire started.

“Enquiries are very much at an early stage and we cannot speculate at this time as to the cause.

“We are also working with the Archdiocese of Glasgow and Glasgow City Council with regard to the welfare of those who use the church and local residents some of whom will not be able to return to their homes until the building has been made safe.

“We are aware this fire will be devastating to the local and indeed wider community, and along with our partners we will continue to support our communities.

“Additional officers will be in the area and I would encourage the local community to engage with these officers should they require assistance or believe they may have information to assist any of the agencies involved.

“We are keen to hear from anyone who may have been in the area of Partick Cross and Partick Bridge Street on Wednesday morning, particularly around 2.30am and 3.00am. Also, if you happened to be driving in the area, including along Dumbarton Road, at that time and have any dash cam footage, then please get in touch with police.

“Anyone with information can contact Police Scotland through 101, quoting incident number 0417 of Wednesday, 28 July, 2021. Alternatively you can call Crimestoppers anonymously on 0800 555 111.”