Staff at University Hospital Crosshouse believe it will take several months before they see any reduction in their workload. 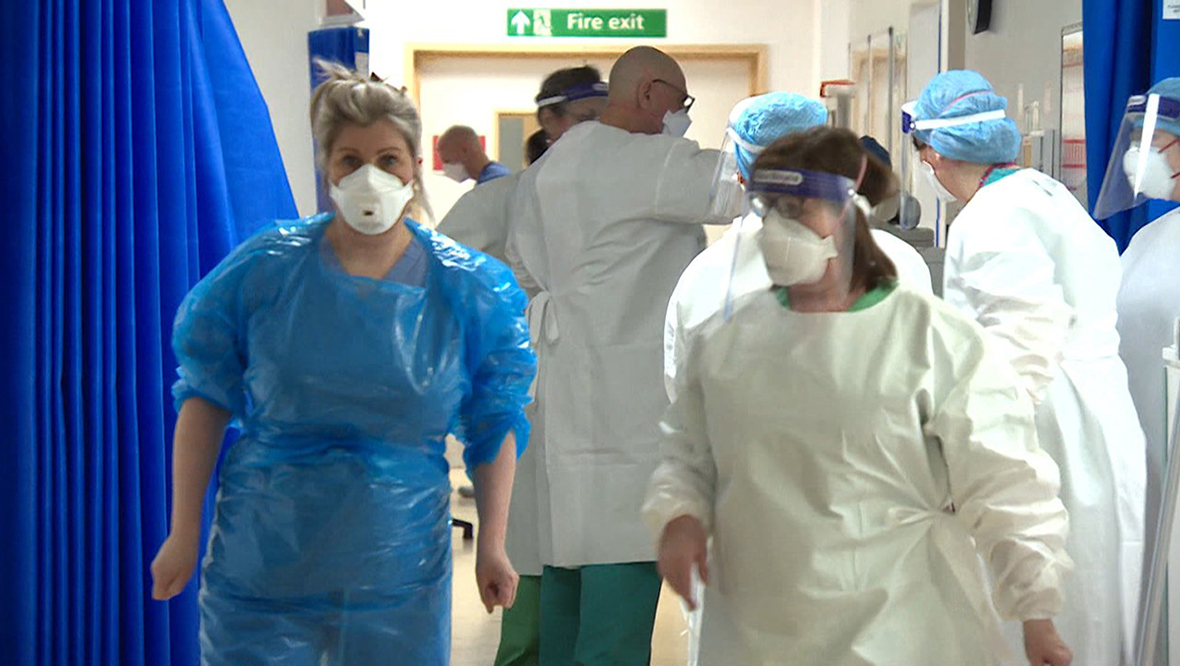 In the corridors and intensive care units of Kilmarnock’s University Hospital Crosshouse, staff are fatigued and stressed.

Coronavirus case rates may be falling across Scotland but the pressure on medical workers remains intense.

Crosshouse has been one of the busiest hospitals in Scotland during the second wave of the pandemic – its ICUs have been stretched to capacity for months.

There are currently 11 patients in the hospital’s 17-bed unit, a decrease of three in recent days and the first time in weeks that the number has reduced.

But staff remain just as busy as patients are staying in hospital longer – some for as many as two months.

Medics believe it will take several months before they see any reduction in their workload.

Gemma Blair, deputy charge nurse in the hospital’s intensive care unit, said the cracks were starting to show among staff who have been dealing with Covid patients for almost a year.

She said: “There are days in here when you feel that the ship has capsized and we are manically trying to get to the shore.

“I have seen what I would say are the strongest of my colleagues crying within the unit because it really is so tough. That’s really the important message to get across that it is still very busy and this is still happening in your local hospitals. “

“We are so tired, we are exhausted. You feel some days that you don’t know how you’re going to make it to the end of the day but then a patient who has been with you for 40 days will wave to their family for the first time on a video call or take their first drink of juice.

Gemma feels she is can switch off from work easier these days compared to the start of the pandemic, but is now worried about the impact the last 12 months has had on staff.

“The first wave I lived it, worked it, breathed it, watched it every day on the news,” she said.

“Now I worry about after – what happens once the Covid unit closes? What will staff do then? Will there be a PTSD element?

“We are used to looking after critically unwell patients but we are not used to this and there is also a worry about the staff who have redeployed from other areas and the strain on them. “

The area that now houses the covid ICU unit was previously used for day surgery – it was converted during the summer months when Crosshouse had no new coronavirus admissions.

Then one Friday night in October, a call came through from accident and emergency.

One of those on shift was ICU consultant Dr Peter O’Brien, who recalls feeling uneasy at what was to come.

He said: “From June we had no new Covid admissions. I was on shift that Friday night in October when we got the call from A&E that we had the first patient of the second wave and the words in our mind were ‘well here we go again’.

“In Scotland, there appeared to be a peak of the second wave and then we took a second superimposed peak on top of that – I didn’t expect that. That second increase in that wave around Christmas going into January felt like a kick when you are down. “

Dr O’Brien says his biggest hope is the vaccine rollout will relieve some of the pressure.

“You never know what’s around the corner,” he said.

“We were always advised when the first wave was over that we had to in a state of readiness for 200, 300, 400 percent capacity. I would say for the next year, our minds will always be in that state of awareness. “

That means the total number of deaths of people who first tested positive for the virus within the previous 28 days now stands at 7111.

There are currently 924 patients in hospital with coronavirus, a decrease of 43, with 80 of those in intensive care, a fall of nine from Thursday.

Although the number of Covid hospital admissions is falling across the country, Dr John Allan, critical care clinical director at Crosshouse, said the second wave has been “relentless”, adding that ICU capacity at the East Ayrshire hospital has been two to three times over capacity for many months.

He said: “The volume of patients and the duration for which we have had to deliver this high level of intensive care is the most striking aspect of this second wave.

Dr Allan says it is also important for hospitals to catch up on elective surgery as Covid rates continue to fall.

He said: “We do need staff to get a chance to decompress and physically rest but we also have this big unknown about what Covid will look like in three months, a years time.

“I guess we all hope that it’s not going to look anything like this but it will change how we work for years to come.

“Even though we have now vaccinated a large section of the population, we are not that much quieter than we were at the peak. It could take several months before our numbers start to come down so we don’t see the light at the end of the tunnel just yet.”

She said: “We have not had as many patients recover, unfortunately, so we have not had that boost that we got with the first wave when patients were discharged; that helped us keep going the first time when we saw these wins but this time it’s been tougher.

“We are a resilient bunch of people, although we are tired. We all just want a holiday to be honest. The support staff are maybe finding it a bit more difficult but we are trying to support them as much as we can. “