The bridge, which connects Sighthill and Glasgow city centre, was installed overnight at the weekend. 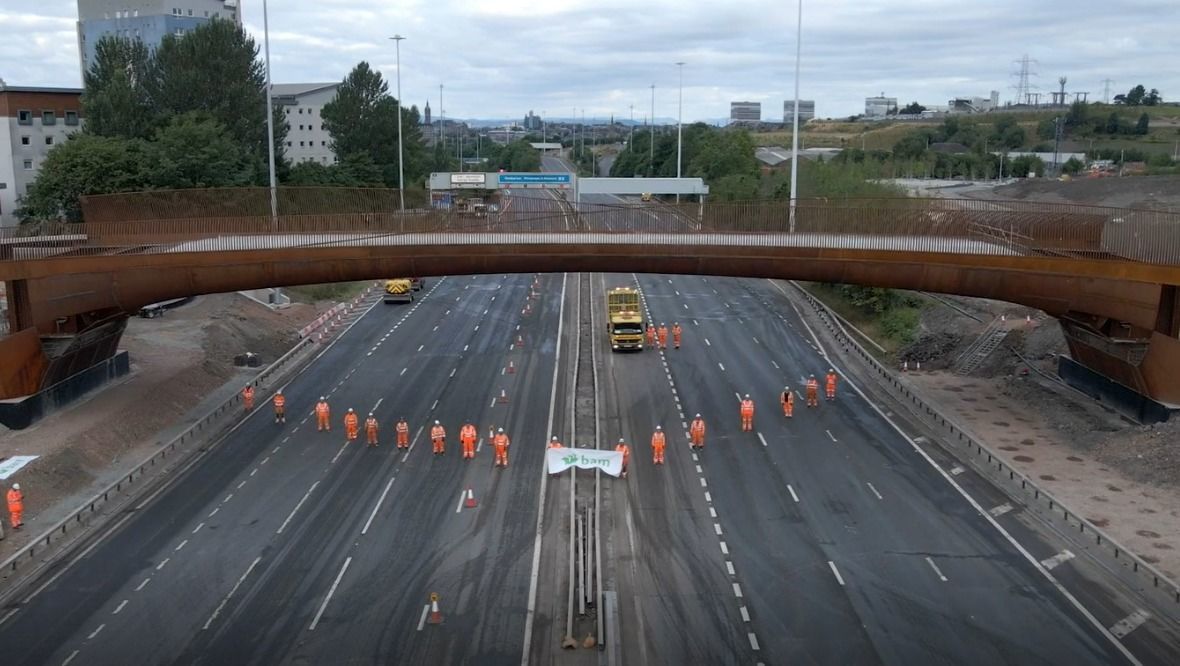 The main span of a new cycle, pedestrian and wheeler bridge over the M8 has been installed.

The bridge, which connects Sighthill and Glasgow city centre, was installed overnight at the weekend.

A stretch of the M8 was closed in both directions as BAM Nuttall carried out the work on behalf of Glasgow City Council.

The new bridge will form an active travel route between Sighthill and the city centre and is part of the £250m regeneration of Sighthill – the biggest such project in the UK outside of London.

The bridge will also be part of a wider active travel network connecting Sighthill, the city centre and neighbouring communities in north Glasgow.

The span’s structure is made of weathering steel, which is expected to result in lower maintenance costs and reflects both the area’s industrial heritage and the front of new buildings such as the Sighthill Community Campus.

During preparation shifts leading up to Saturday night, lighting masts and barriers were removed.

The 1000-tonne bridge span was then bolted to a specialist trailer, known as a SPMT, for transportation.

The SPMT then drove – very slowly, over a period of some hours – along the M8, with hydraulic jacks used to lift the bridge into place.

The bridge, which is funded through the Glasgow City Region City Deal, is expected to open early next year.

Finance secretary Kate Forbes said: “The installation of this new bridge over the M8 represents another milestone in the delivery of the Sighthill Regeneration Project.

“The Scottish Government is contributing £500m over 20 years to the Glasgow City Region City Deal.

“Investment in this project through the deal will contribute to the region’s economic recovery by creating jobs, encouraging active travel and providing the commercial infrastructure to support and attract businesses to Glasgow and the surrounding areas.”

Iain Stewart, UK Government minister for Scotland, said: “Connecting Sighthill to Glasgow city centre, this major new bridge over the M8 is another important step forward in regenerating this part of the city.

“It will provide a convenient travel link and help boost the local economy.

“The UK Government is investing more than £1.5bn into City Region and Growth deals right across Scotland, helping create jobs and drive growth as we recover from the pandemic.”