They attached themselves to a 19th century landscape painting. 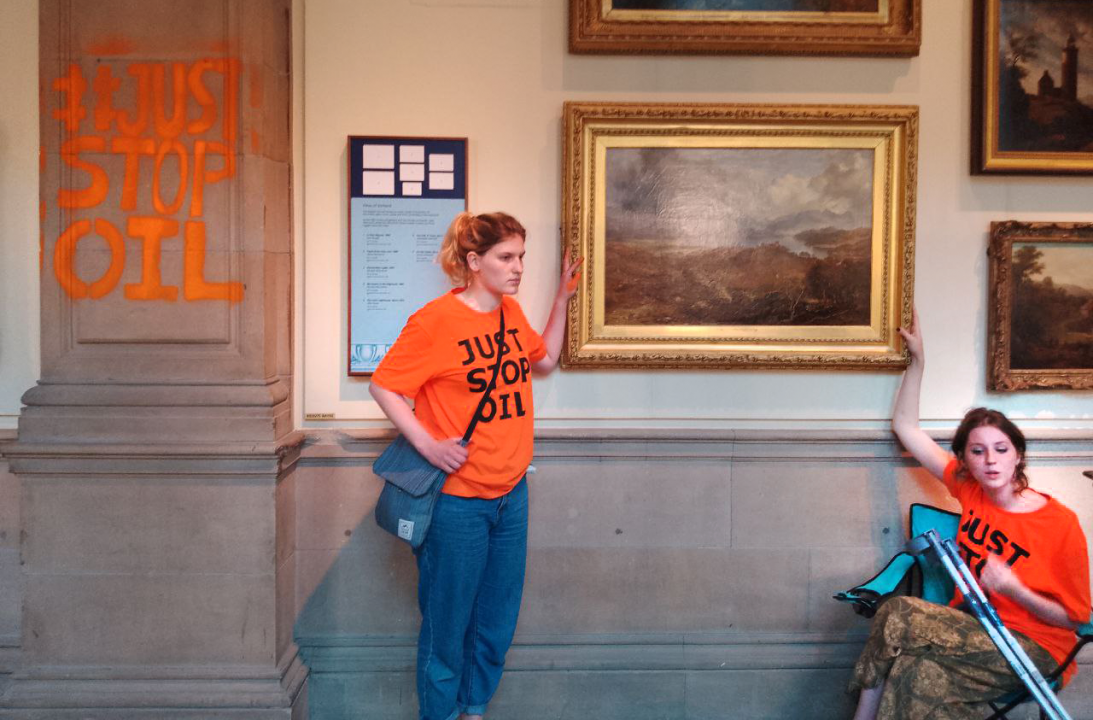 Protesters have glued themselves to a painting at the Kelvingrove Art Gallery in a demand for an end to new oil and gas extraction.

The painting is a 19th century landscape painting by Horatio McCulloch called ‘My Heart’s in the Highlands’.

They also sprayed the group’s logo onto the walls and floor of the gallery, based in Glasgow’s West End.

A spokesperson for Glasgow Life said the gallery was closed early due to the protesters, whilst conservation teams work with the police to ascertain the extent of any damage.

Emma Brown, 30, a graduate from Glasgow School of Art, was one of those involved.

“I am taking this action because art is about telling the truth and connecting to our deepest emotions,” she explained.

“But right now, when we need them most – art institutions are failing us.

“They seem to think it’s enough to put on an exhibition about climate change rather than challenge the government’s genocidal plans to allow new oil and gas.

“This is unacceptable, it’s not enough to be informed as citizens, we need to be active.”

Hannah Torrance Bright, 20, a student from the Glasgow School of Art, asked what is more sacred than life itself.

She said: “I’m an artist, I love art, but instead of spending my time making art I’m taking actions like this, spending time in and out of cells, and being punished by our legal system for begging the government to let my generation have a future.

“We hold these works of art sacred, but what is more sacred than life itself?”

“This landscape was painted in 1860 at the height of the Highland Clearances, when whole crofting communities were evicted by a new class of landlords ruthlessly pursuing their own private interests,” they said.

“It was only when crofters organised and resisted that they won rights.”

They added: “I urge anybody listening, including public institutions, professional bodies, and concerned citizens to step up and play your part.

“Now is not the time for complacency. Civil disobedience is scary but it is the only sane thing to do and you won’t regret it.”

A spokesperson for Glasgow Life said: ‘On Police Scotland advice, Kelvingrove Art Gallery and Museum has closed early today, due to climate protestors inside the museum.

“Glasgow Life Museums’ security and conservation teams are currently working with the police to ascertain the extent of any damage. We will update on reopening as soon as possible.”