The Scottish Fire and Rescue Service was called to the blaze at Mossbell Road, Bellshill, on Friday morning. 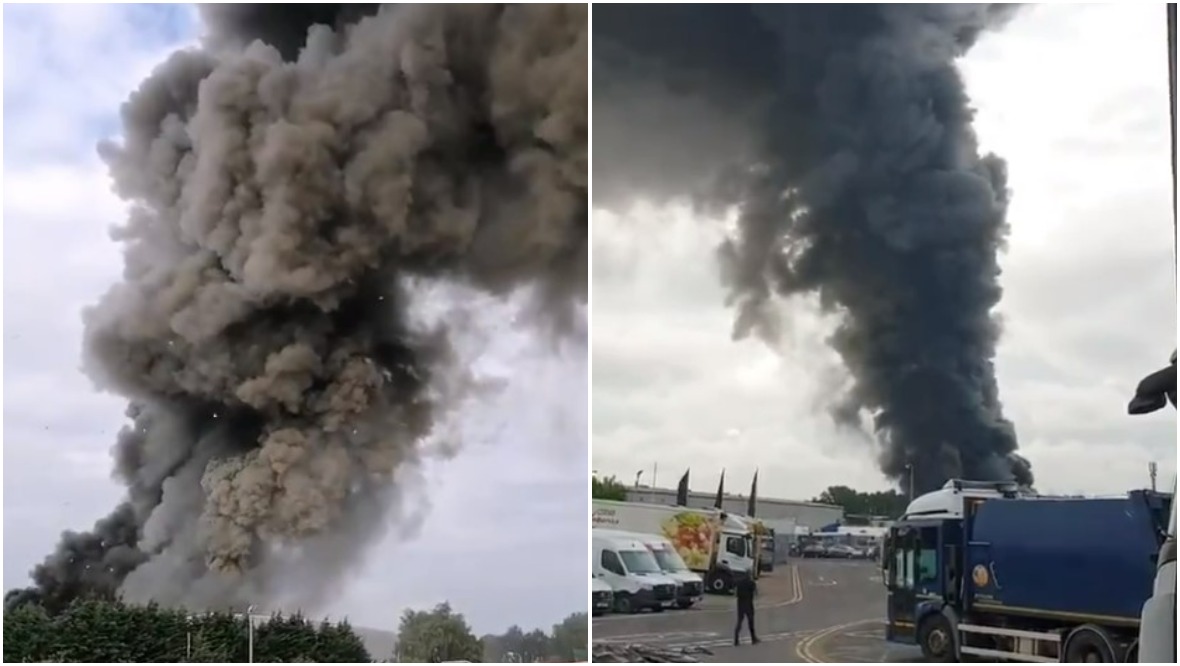 A plume of black smoke could be seen for miles after a fire broke out at a medical waste processing plant in North Lanarkshire.

Dark clouds of smoke billowed from the industrial unit at Mossbell Road, Bellshill, on Friday morning.

The Scottish Fire and Rescue Service was called to the scene shortly after 8am, with firefighters using nine fire engines and two aerial rescue pumps to tackle the blaze.

No casualties have been reported at the site, run by Tradebe Healthcare, with people warned to avoid the area.

Tradebe confirmed a fire broke out inside its facility at around 8am but said “it is too early to speculate as to the cause”.

The purpose-built site opened in December 2019 and can treat up to 80 tonnes of medical waste per day using “state of the art technology”, the firm has said.

A Tradebe spokeswoman said: “An incident occurred today at approximately 8am on the Tradebe site at Bellshill when a fire broke out inside our facility.

“The fire brigade are in attendance and are working to bring the fire under control.

“All Tradebe colleagues were safely evacuated and everyone is accounted for.

“At this stage we are collating all the available information on the incident and it is too early to speculate as to the cause.”

It picked up the ten-year contract after the collapse of Healthcare Environmental Services, which ceased trading in December 2018 after it became embroiled in a clinical waste pile-up controversy with the NHS.

Gordon Beattie, director of national procurement at NHS National Services Scotland (NSS), said: “NSS is aware of the fire at a facility operated by our clinical waste partner Tradebe.

“Tradebe have kept us fully informed and we are working in partnership to ensure that their alternative arrangements are in place to protect service.”

A fire service spokeswoman said: “We were alerted at 8.11am on Friday July 9 to reports of a building on fire at Mossbell Road, Bellshill.

“Operations control mobilised four appliances to the scene where a fire is affecting an industrial unit.

“Additional responses have been sent to the area and there are currently nine appliances and two aerial rescue pumps in attendance, and firefighters are continuing to tackle the fire.

Chris Dailly, head of environmental performance at SEPA, said: “SEPA staff have been on site today at Bellshill Industrial Estate to support our colleagues in Scottish Fire and Rescue Service and Police Scotland.

“We have confirmed that firewater run-off from the firefighting efforts at Mossbell Road, Bellshill, is entering the Scottish Water system and we don’t expect any impact on the water environment as a result. SEPA officers have carried out an initial assessment of local watercourses and will continue to monitor this over the coming days to make sure this remains the case.

“SEPA has liaised with experts in public health around air quality. Due to calm weather conditions the plume has dispersed in the higher atmosphere. Monitoring using permanent units will continue over the weekend.

“We will continue to provide information to appropriate experts and provide support as required.

“Anyone who is concerned about a potential pollution incident can report it using our 24-hour pollution reporting service. This can be done through our online form.”