Pedestrians were supposed to be allowed access to their homes even though roads were closed. 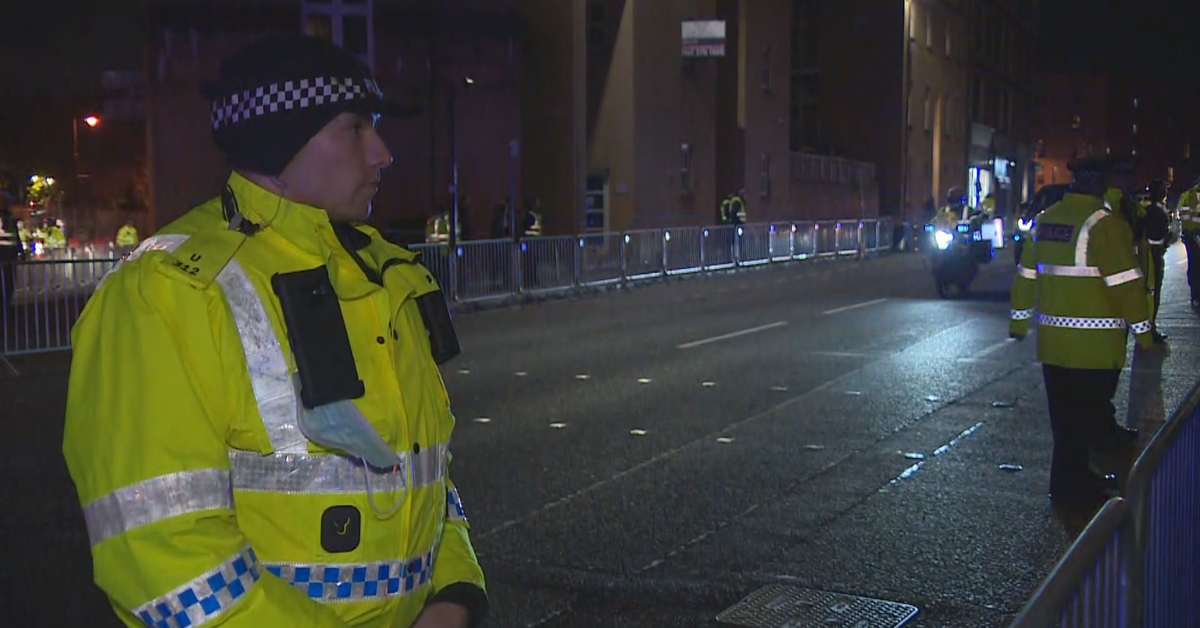 Residents were forced to take an hour-long detour in the dark or get a train after a Glasgow neighbourhood was locked down.

Pedestrians were supposed to be allowed access to Argyle Street and Dumbarton Road, in Finnieston, even though the roads were closed to cars.

But as the police presence grew for the exclusive COP26 dinner at Kelvingrove Art Gallery and Museum for world leaders and royals, residents on foot began being turned away.

Residents told STV News that they had been given no advance warning of a “short notice” change to the rules.

“The Get Ready Glasgow website said pedestrian access would be maintained throughout, so this blindsided people, and carers weren’t even allowed to cross to reach vulnerable residents when they showed their Cordia [identification] badge,” KayIeigh Quinn told STV News.

“Just another example of the council failing its own citizens during COP while wining and dining world leaders at a publicly owned museum they’ve closed off to taxpayers.”

As US special presidential envoy for climate John Kerry was stuck on one side of the barrier, people who could see their homes just yards away were told they would have to walk through Kelvingrove Park and down Byres Road to Partick to get there.

One resident described Kelvingrove Park as “pitch black”, and while faced with walking alone in the dark for an hour, another woman went to Anderston station and got a train to Exhibition Centre.

Others described being left in tears at the prospect of having to travel through a very dark, unlit city park despite being just 100 yards from their front doors.

The First Minister, Nicola Sturgeon, said she “had concerns” over any suggestion the safety of women had been compromised, but praised the police overall for their work during the conference.

“I don’t know the detail of that, I’ve seen reports of that this morning. I will certainly speak to the police about the circumstances of that,” she said after an event at COP26.

“It won’t surprise you to hear that I would have concerns about any suggestion that women were put into what even they would feel was a position of not being safe.

“For obvious and understandable reasons there was a significant security operation around Kelvingrove last night.

“I think the police are doing a fantastic job here so I’m not being critical of them in any way, but women’s safety at all times, particularly in light of recent concerns, is paramount.

“If there is even a perception that women were put in a position where they weren’t safe, I know the police would want to make sure that wasn’t something that happened again.”

Annie Wells, Scottish Conservative MSP, said: “My heart goes out to the women who have voiced their distress at feeling unsafe walking home at night.

“Women’s safety cannot be compromised under any circumstances. It’s totally unacceptable for people to feel afraid because they’re being forced to walk through potentially dangerous routes in the pitch black.

“I urge Police Scotland and the local council to immediately act so that nobody is forced down badly lit paths where they fear for their safety.”

Roast cafe closed due to the restrictions on Argyle Street.

The 78 Bar and Kitchen posted on social media saying the best route to get to their premises on Kelvinhaugh Street was via Partick.

Police Scotland said: “We are aware of a few concerns raised with people trying to gain access to their homes. Escort officers were on the ground to assist people. We thank local people for their understanding.”

Assistant chief constable Gary Ritchie has since apologised “for the concern these changes caused and for the inconvenience to those diverted”.

He said: “We do, in particular, recognise and acknowledge the commentary from some women who had to walk through the park on their own last night, we want to keep everyone safe and we know that the onus is on us to recognise when we could provide some more support and visibility to reassure people in our communities.”

ACC Ritchie said there are no plans to reintroduce the diversion but that if further disruption is required at short-notice then Police Scotland would try to establish additional patrols to “provide reassurance”.

He also said the force will work with Glasgow City Council to see whether lighting in Kelvingrove Park can be improved.

Glasgow City Council’s website says residents would get into the homes despite road closures.

A spokeswoman said: “We have been working very hard to let people know about the restrictions that are in place for the climate change conference so that they can plan ahead and work around the security measures.

“For on the ground, operational reasons, Police Scotland changed the diversions at short notice last night (Monday, November 1) and diverted members of the public through Kelvingrove Park. Police Scotland has apologised for the concern and inconvenience caused by these last minute changes.

“We’d identified an alternative route on the back of the original restrictions via the park to lessen the impact on the public. Four additional lighting rigs had been installed. We understand that members of the public might have taken other routes that we couldn’t have predicted.

“We make every effort to make sure that residents and businesses are told about restrictions well in advance. Whenever we are notified of changes they are posted on social media, as they were last night. The Get Ready Glasgow website is also regularly updated.”