There are fears over the future of the hospitality sector as people are urged to reduce contact with other households. 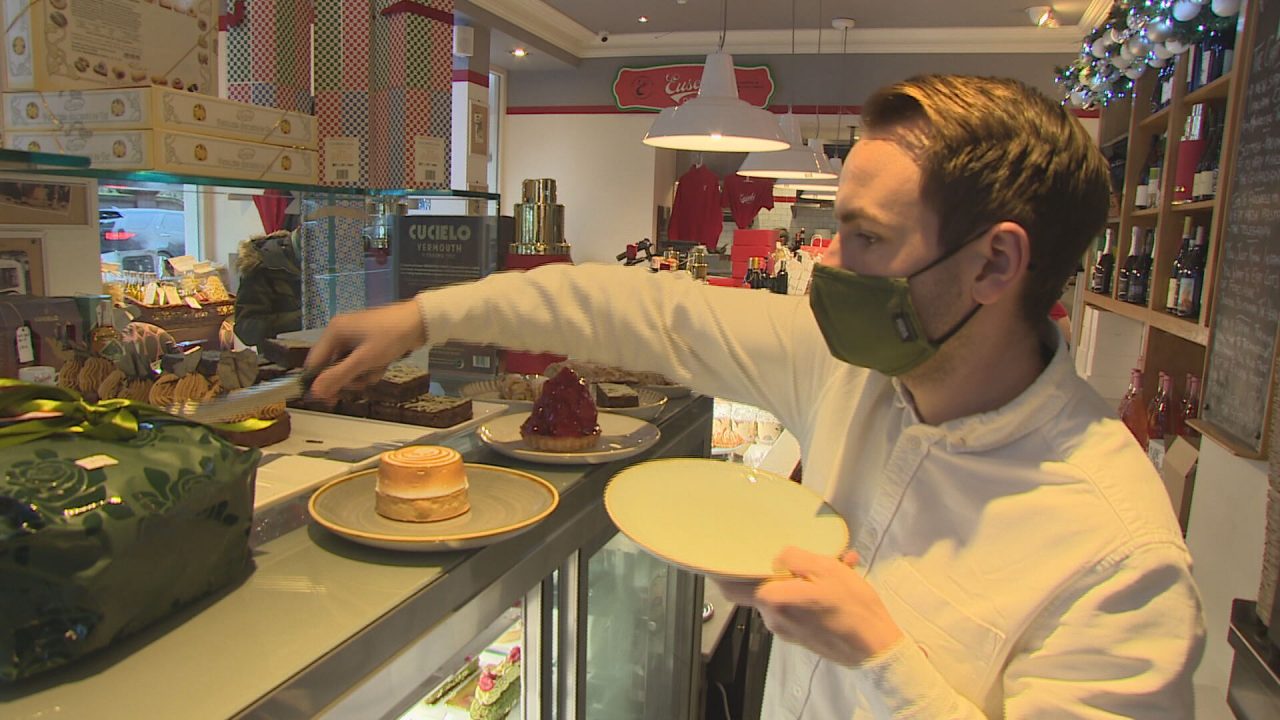 By Lewis McKenzie and Susan Rippol

The hospitality sector has been “thrown under the bus again”, it has been claimed, as new measures are introduced in a bid to tackle rising Covid cases.

Giovanna Eusebi, who runs Eusebi Deli in Glasgow’s West End, said that bookings have fallen by around 40% as people are told to reduce contact with other households during the festive period.

And despite financial support being made available by the Scottish Government to mitigate the impact of new measures, there are concerns that some venues will simply not open again.

“We feel as if the rug has been pulled from under our feet,” Giovanna told STV News.

“It’s deja vu from March 2020. We really just need someone to level with us and let us know what’s going ahead so we can put a back-up plan in place.”

She added: “We need a grown-up in the room now to start driving the bus here and telling us what road we’re going down.”

Giovanna indicated her belief that the business could have a chance to make up for the losses incurred during the pandemic.

But, she said that now it feels as though the sector is “back to square one”.

“Obviously, we are playing catch-up. We are all hanging on in hospitality,” she explained.

“We thought this is our busiest time of year, we had a chance to make up the losses that we’d already incurred.

“But now we’re back to square one and no-one is guiding us, levelling up, giving us the right information.

“There is only a plan of fear, creating anxiety for the general public.

“So people are cancelling bookings, we’re down by about 40%, so where do we go from here?”

Giovanna also highlighted the knock-on impact of people opting to reduce their time going out.

She said: “Telling people to stay at home is conflicting advice. It also has a huge effect on our supply chain.

“It has a huge effect on auxiliary services – taxi drivers, hairdressers, people don’t go out.

“I spoke to a woman who owns a clothes shop this morning, her sales are now down too.

“So it has a knock-on effect for everybody.”

She added: “We are fearful of what’s going to happen. If there is no support financially for hospitality, then many places will just simply not open again and we’ll have mass unemployment.”

Eusebi’s Deli has complied with every Covid measure put in place, Giovanna insisted, as she asked what more can be done.

“Hospitality has just been thrown under the bus yet again,” she told STV News.

“We have always complied, we ask our staff to take lateral flow tests, we have every Covid measure in place and always have done.

She added: “Businesses can’t operate on zero customers coming in.”