Historically significant artefacts to be repatriated to India

Six of the artefacts were removed from temples and shrines in different states in Northern India during the 19th century. 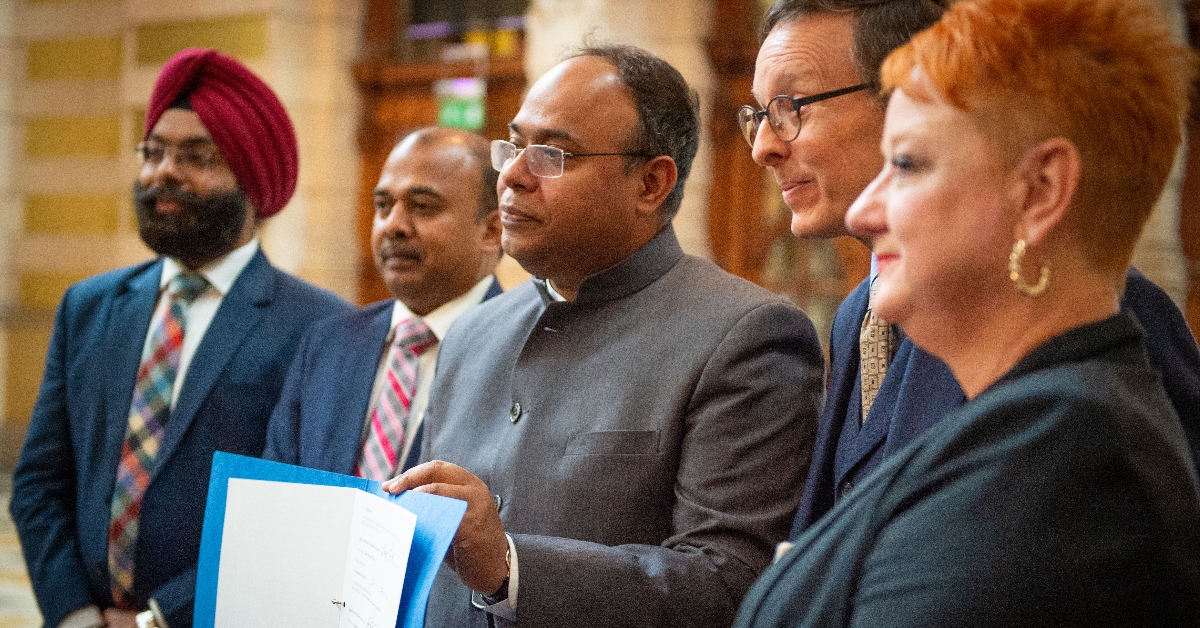 Historically significant Indian artefacts are being returned to the country from Glasgow.

Six of the artefacts were removed from temples and shrines in different states in Northern India during the 19th century.

The seventh was purchased following a theft from the owner.

Included among them is a ceremonial Indo-Persian tulwar (sword) which is believed to date back to the 14th century.

An 11th century carved stone door jamb taken from a Hindu temple in Kanpur is also one of the artefacts.

All of the items were gifted to Glasgow’s museum collections.

Glasgow Life Museums has been working on the repatriation of the Indian artefacts alongside the High Commission of India in London since January last year.

A transfer of ownership ceremony took place at the Kelvingrove Art Gallery and Museum after Glasgow City Council’s City Administration Committee approved a recommendation by a cross-party working group.

The Working Group for Repatriation and Spoliation had recommended the return of 51 items to India, Nigeria and the Cheyenne River and Pine Ridge Lakota Sioux tribes in South Dakota, US.

Glasgow Life, the charity which manages the city’s museums collections, welcomed dignitaries from the High Commission of India on Friday for the ceremony.

Delegates from the Government of India and the Archaeological Survey of India were given the opportunity to view the objects at Glasgow Museums Resource Centre, where they are stored safely.

Duncan Dornan, head of Museums and Collections, Glasgow Life, described it as a “significant step” in the city’s repatriation history.

“Glasgow has led repatriation efforts in the UK since 1998, when the city agreed to return the Lakota Sacred Ghost Dance shirt to the Wounded Knee Survivors’ Association,” he said.

“The transfer of ownership of the Indian antiquities symbolises a significant step for Glasgow, with the city continuing its positive repatriation history by ensuring these cultural artefacts are placed back in the hands of their legitimate owners.

“We look forward to continuing our work with the Indian authorities to deliver the safe return of these artefacts.”

Bailie Annette Christie, chair of Glasgow Life and convenor for Culture, Sport and International Relations for Glasgow City Council, underlined the commitment to address past wrongs.

“The repatriation of these objects is of great historical and cultural importance to both Glasgow and India, so it’s a privilege to welcome Indian dignitaries to our city for such a momentous occasion,” she said.

“The agreement reached with the Government of India is another example of Glasgow’s commitment to addressing past wrongs and remaining transparent when explaining how objects arrived in the city’s museum collections.”

Sujit Ghosh, acting High Commissioner, High Commission of India, said: “We are delighted that our partnership with Glasgow Life has resulted in decision to restitute Indian artefacts from Glasgow museums to India.

“These artefacts are an integral part of our civilisational heritage and will now be sent back home.

“We express our appreciation to all the stakeholders who made this possible, especially Glasgow Life and Glasgow City Council.”