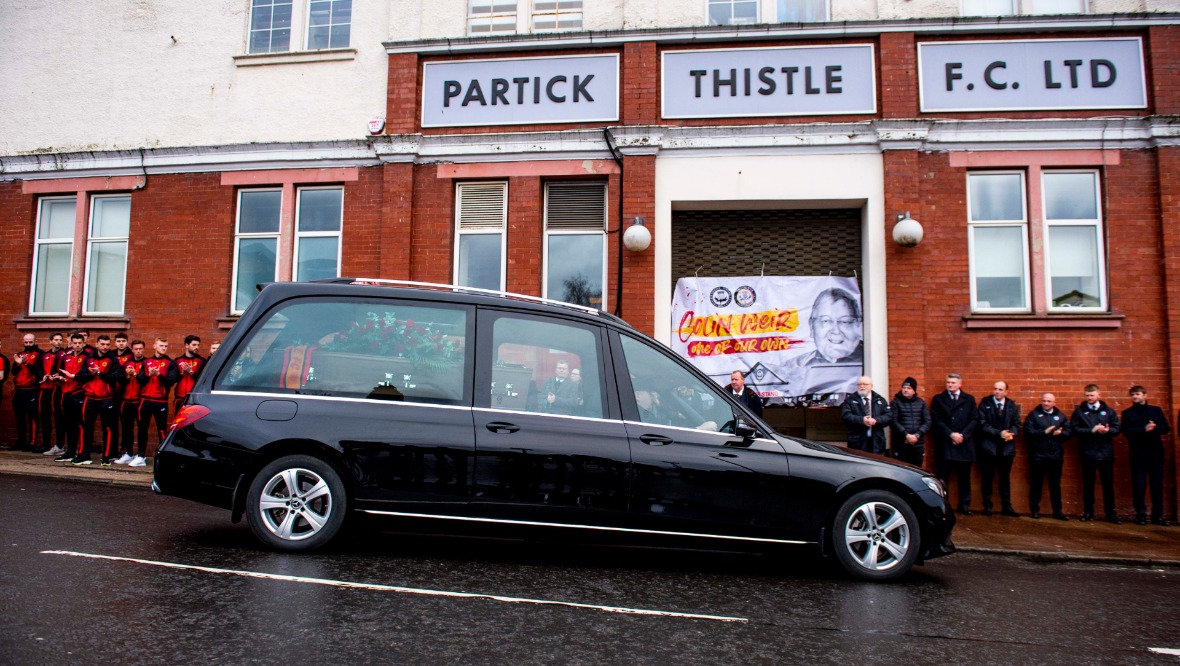 A funeral has been held for EuroMillions winner and Partick Thistle majority shareholder Colin Weir, who died last month aged 71.

The procession paused outside Firhill Stadium in Glasgow as he paid a final visit to his favourite football team.

Mourners lined the streets as club players, officials and fans led a round of applause as Mr Weir’s hearse reached the ground.

A Partick Thistle scarf was draped over the car and a club wreath was placed next on his coffin by chief executive Gerry Britton.

A service was then being held for the SNP donor and Scottish independence supporter at Partick Burgh Hall, where Robert Burns poem An Honest Man was read out and Caledonia by Donnie Maclean was played.

The celebrant Drew Brady spoke about Mr Weir’s work as an STV cameraman, his love of Partick Thistle and his “dry sense of humour”.

Mr Weir and his then-wife Chris, from Largs in North Ayrshire, claimed the £161m EuroMillions jackpot in July 2011, the highest amount handed out in the UK at the time.

A lifelong Thistle fan, he invested part of his winnings in the club, leading to the youth set-up being rebranded the Thistle Weir Youth Academy and a section of the stadium being named the Colin Weir Stand.

Mr Weir secured a majority shareholding at the club in November and promised to give the 55% shareholding directly to a fans group by March 2020.

The club dedicated a recent win to him following his death after a short illness, with players wearing black armbands and fans holding a minute’s applause.

A statement on the club website paying tribute stated: “A Scottish patriot, philanthropist and Jags man to the end. Rest In Peace, sadly missed.”

Ms Sturgeon and her predecessor Alex Salmond both paid tribute when Mr Weir’s death was announced on December 27.

Last year, the Weirs confirmed they would divorce after 38 years of marriage.