Professor Jason Leitch said the city may be under Level 3 restrictions for more than another week. 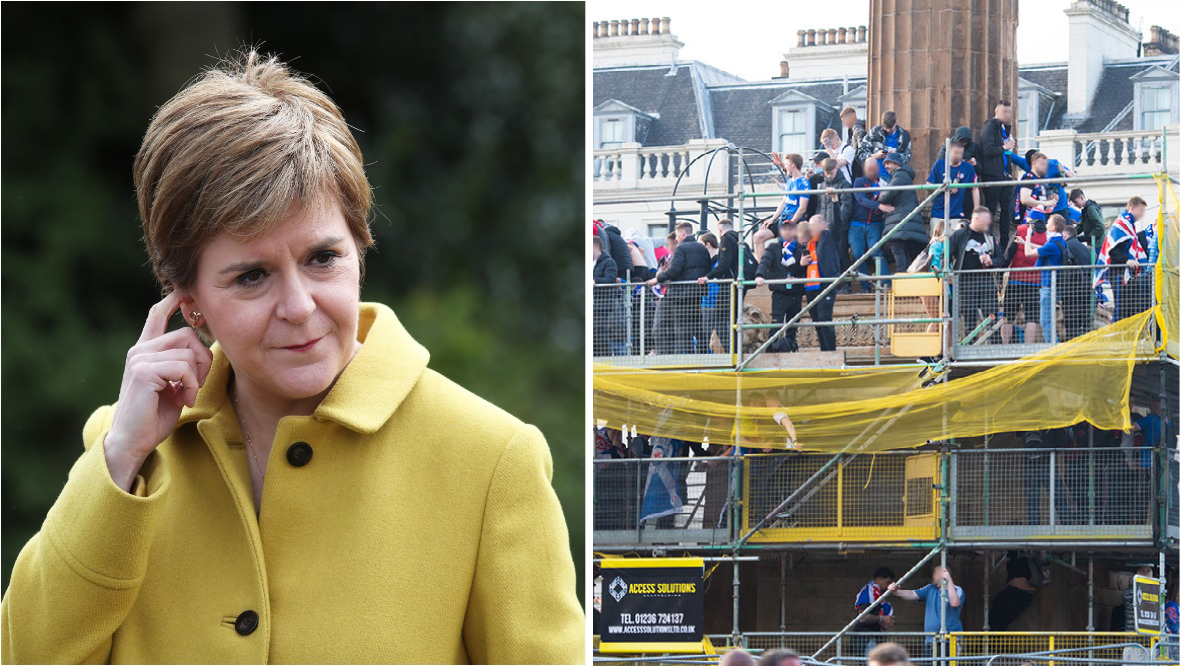 Nicola Sturgeon has said she is “utterly disgusted” by Rangers fans who “rampaged through the city” as Glasgow’s Level 3 restrictions could continue for more than an extra week.

The First Minister said that the violence, vandalism and anti-Catholic prejudice on display was “selfish beyond belief” amid rising coronavirus cases in the city.

Her statement came as Professor Jason Leitch, Scotland’s national clinical director, said that restrictions may continue in Glasgow beyond May 24.

An estimated 15,000 Rangers fans amassed outside Ibrox and then in George Square on Saturday. Five police officers were injured after supporters began throwing missiles at them. Police Scotland said that 28 people had been arrested so far for a variety of offences and that more arrests will follow.

Sturgeon said she had been inundated with messages about the “disgraceful scenes” in Glasgow.

She said: “Police still have a job to do, which restrains my comments to some extent – but to say I’m utterly disgusted by the Rangers fans who rampaged through the city would be an understatement.

“I’m also angry on behalf of every law abiding citizen. In normal times, the violence and vandalism, and the vile anti-Catholic prejudice that was on display, would have been utterly unacceptable. But mid-pandemic, in a city with cases on the rise, it was also selfish beyond belief.

“People across the country still living under the most difficult restrictions – not able to see family or attend weddings and funerals – are rightly furious at the irresponsible actions of a thuggish minority who seem to care little for the risks they pose to other people.”

She said that there is a need for the government and police to reflect on what more can be done to prevent and tackle such scenes but said that Police Scotland officers had her admiration for the job they did in “difficult and dangerous circumstances”.

Five police officers were injured and more than 20 people arrested after massive crowds of Rangers fans had to be dispersed from George Square in Glasgow. Police Scotland’s assistant chief constable Gary Ritchie said: “Police Scotland, our partners and Rangers Football Club had all asked fans not to gather and to take personal responsibility for their actions.

“But 15,000 people chose to ignore that and took the selfish decision to gather at Ibrox and then George Square.”

General Secretary of the Scottish Police Federation Callum Steele hit out at the incident on Twitter with pictures showing the extent of two officers’ injuries.

He said: “No matter how lucky we are to have such courageous officers protecting our communities, none of them deserve this.”

The city remains Scotland’s virus hotspot with the latest seven-day rate of positive cases per 100,000 people at 89.4.

The rest of the country will have coronavirus restrictions eased on Monday, May 17, but Glasgow and Moray will remain under Level 3.

Pollokshield and Battlefield remain the most affected neighbourhoods with residents urged to get tested and take up the opportunity to be vaccinated when offered.

Having taken a test herself, Sturgeon said: “If you live in – or have recently spent time in – the Southside of Glasgow, please help get this outbreak under control by taking a test.”

Speaking on BBC Scotland’s The Sunday Show, Prof Leitch said “it may well be” Glasgow remains under Level 3 beyond the initial one week delay to easing restrictions.

He told the programme: “We’ll give the best advice we can on this – we’ve met all weekend, we’ll meet next week.

“Glasgow are doing an enormous amount of work. The leaders of the public health response in Glasgow are testing everywhere.

“If you haven’t had a test and you’re in Glasgow, you should do it.”