Magical annual display was switched on early this year to cheer up neighbours. 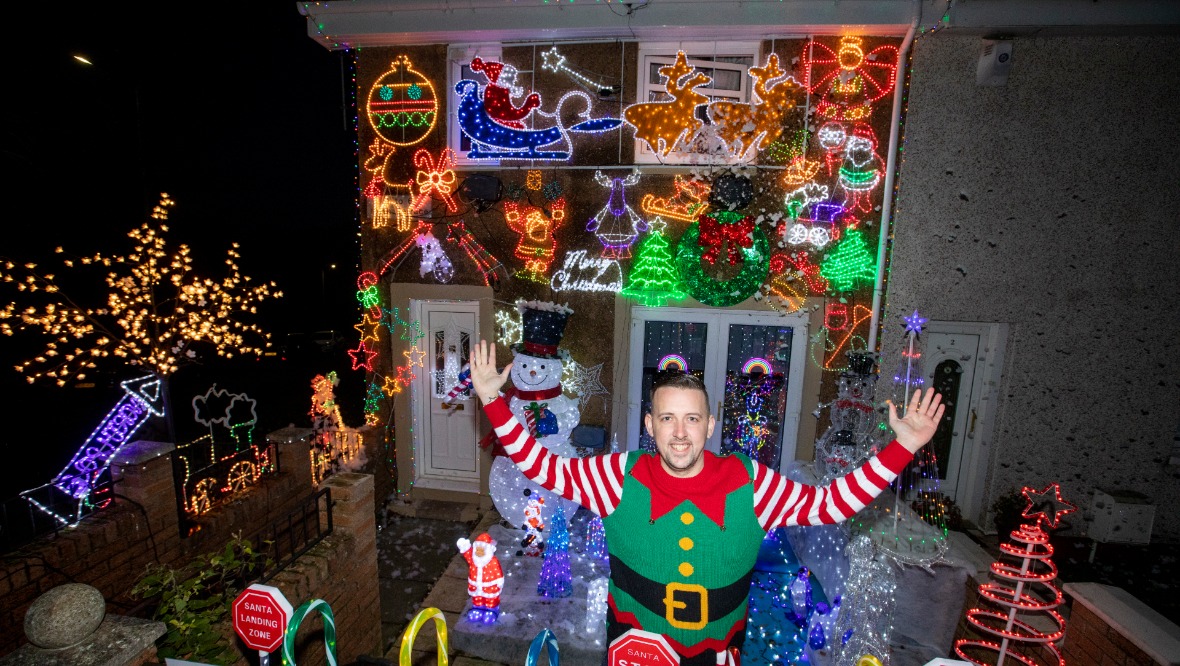 A dad went all out to cheer up his neighbours by decking out his house with a huge Christmas display – including 25,000 lights.

Iain Fleming, 35, lit up his house in Hamilton, South Lanarkshire, at the start of the month with sparkling bulbs and festive figures in a magical display that uses more than 100 plugs.

Dad-of-three Iain has created the amazing show of lights for the last ten years, raising £9000 for charity in the process.

He started the tradition ten years ago with just six light bulbs but has amassed around 25,000 over the years.

Iain, dad to Ellie, 12, Hollie, aged nine, and Lucy, aged five, said: “I started it ten years ago, just after my eldest daughter was born.

“I switched the display on earlier this year to help brighten people’s mood.

“Everyone has loved it and said it’s been great to see some festive cheer.

“This year we did a virtual switch on, on Facebook, and we had people joining in from Canada and Ireland, people really enjoyed it.

“The kids and the neighbours love it – everyone was outside this year watching them being switched on.”

It takes Iain seven days to create the display, which he will keep up until January 1.

The lights are all LED and it costs Iain around £3 a night to run, which he said is worth it to make people smile and help charities.

Iain began the tradition after watching his grandfather create a similar Christmas display at his house every year when he was growing up.

After his eldest daughter Ellie was born, Iain, a general manager at a hospitality company, decided he wanted to follow in his grandad’s footsteps.

Iain added: “I grew up in Aberdeen where my grandad did a similar thing when I was growing up.

“I decided when Ellie was born that I wanted to do it too, and started out with just six light bulbs, to now having 100 plugs and 25,000 lights.

“It takes me seven days to put the display up, I’m a perfectionist, so I like to do it myself.

“The lights are all LED so it doesn’t actually cost that much in terms of electricity, probably around £3 a night to run.

“We have raised around £9000 for charity in those ten years and donated to the children’s ward at University Hospital Wishaw, Beatson and Les Hoey DreamMaker Foundation.”

Donations can be made here.