Ex-footballer was a ‘mule’ in money laundering operation

A former Scots footballer was a ‘mule’ in a cross-border money laundering operation.

The ex-Airdrie and Peterhead midfielder – once red-carded for a tackle on then Rangers star Joey Barton – had been under police surveillance in Operation Influence.

The probe involved people known as “mules” using their bank accounts to store dirty money by a third party.

The “mule” would then withdraw the money, buy goods and then keep some of the cash for themselves.

He also admitted withdrawing the cash from his bank account which contained criminal property.

Prosecutor Tanjeel Maleque said: “A transaction took place on November 27, 2018 in which the sum of £6500 was passed into the bank account (of Blockley).

“Police intelligence found this was fraudulently obtained from North Yorkshire.”

Blockley was arrested later that day by police.

Paul Sutherland, defending, told the court the crime came as a result of Blockley’s addiction to cocaine.

The lawyer added: “His background report explains his position he finds himself in which is the catalyst for the offending.

“He knows without people such as himself organised crime and drug dealing cannot function.”

Sheriff Jonathan Guy tagged Blockley for 81 days, keeping him indoors between 7pm and 7am.

On Thursdays and Sundays, the order changes from 10pm to 7am due to Blockley attending drug counselling.

The sheriff also put Blockley, of the city’s Carntyne, under supervision for 12 months.

He said: “You pled guilty to serious charges and your lawyer quite rightly accepts and highlights the connection of the offences have to serious organised crime.

“The court treats these matters seriously.” 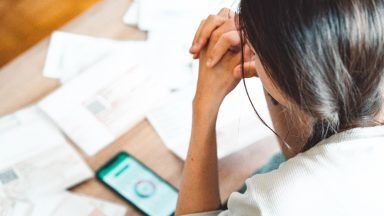 One in five Scots running out of money before payday, study finds